International Data Corporation (IDC) assessed the balance of power in the global tablet PC market in the first quarter of this year. The industry reportedly showed a negative trend.

From January to March inclusive, 38.4 million tablets were sold globally. This is 3.9% less than the result for the first quarter of 2021, when deliveries were 39.9 million units.

The decline is explained both by the seasonal factor and by market saturation; after high sales during the self-isolation of citizens due to the pandemic. In addition, there is currently a shortage of electronic components.

“While the tablet market is certainly on a downward trend at the global level because of lower demand in mature markets, it is interesting to see several new players entering the emerging markets, especially smartphone vendors like realme, OPPO, Xiaomi, and so on,” said Anuroopa Nataraj, senior research analyst with IDC’s Mobility and Consumer Device Trackers. “While their volumes are not significant enough to move the market as of now, it is the high demand for tablets in the emerging markets since the onset of the pandemic that has led these vendors to take advantage of their existing channel presence to build an ecosystem where consumers possess multiple products of the same brand, just like Apple.”

Apple remains the largest player in the global tablet market with a 31.5% share in the last quarter. In second place is Samsung with 21.1%, and Amazon closes the top three with 9.6%. In addition, the top five included Lenovo and Huawei, the result of which was respectively 7.8% and 5.8%. All other suppliers together hold 24.1% of the global industry. 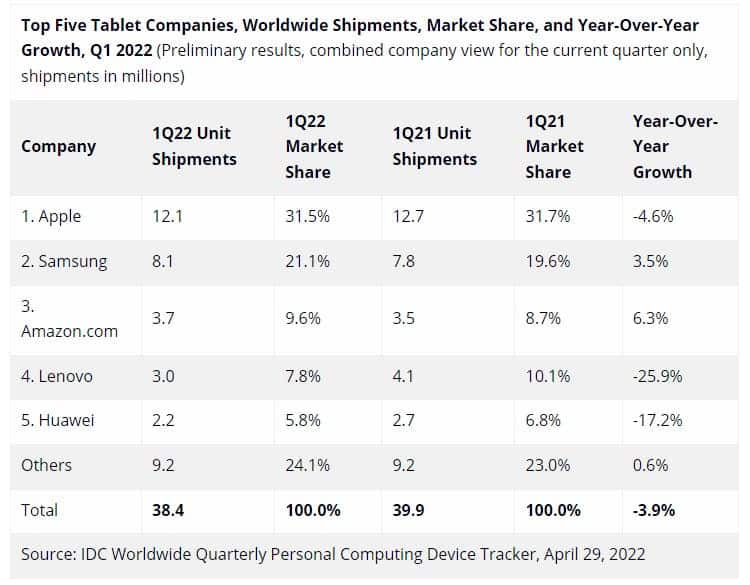 Analysts also note that new players from smartphone vendors, such as Oppo, OnePlus, Vivo and Realme, are entering the tablet market. But their sales volumes are still relatively small. Recently, the Chinese telecommunications giant Huawei announced the MatePad SE tablet computer running the HarmonyOS 2.0 operating system. The tablet is targetting children: the gadget can act as an entertainment and educational center.

“The decline in Chromebooks doesn’t come as a surprise given the buildup of inventory; due to reduced demand over the past several quarters;” said Jitesh Ubrani, research manager with IDC’s Mobility and Consumer Device Trackers. “Barring any major shifts in supply, we do anticipate the inventory to clear out with the help of promotional activity over the course of the coming months and new shipments will start to pick up as the educational buying cycle begins to ramp up again.”

Next Poco X4 Pro 5G review: better than ever...