Today, we learned that two folding screen smartphones designed by Samsung have passed the 3C certification. The latter doesn’t reveal too much information concerning the phones but it’s a clear hint that these two are on the way and will hit the stores in the near future. Well, the two phones we are talking about came with model names SM-F9360 and SM-F7210. From the screenshot, we can see that they will support up to 25W fast charging. That’s not difficult to guess that we are dealing with the Samsung Galaxy Z Fold 4 and the Samsung Galaxy Z Flip 4. So finally, Samsung has decided to bring a fast charging solution to its foldable smartphones. 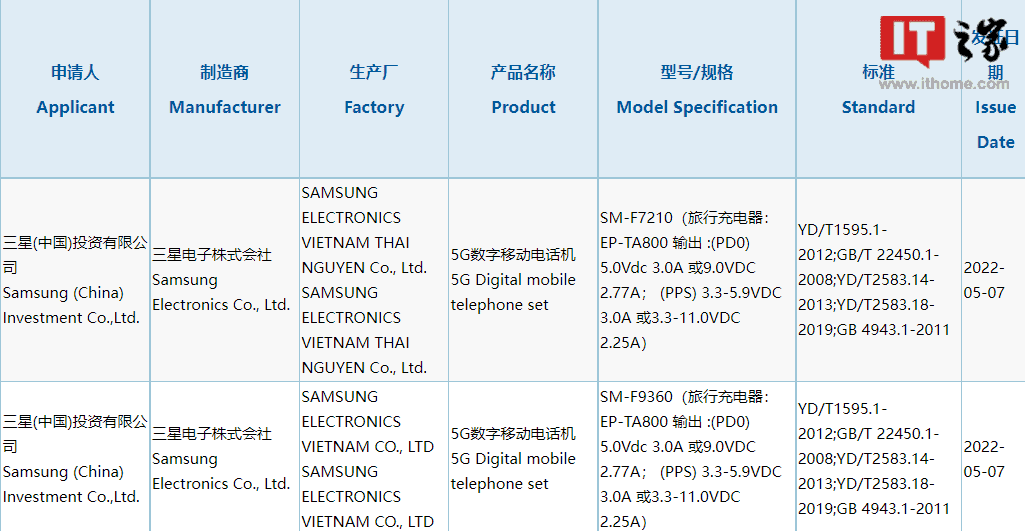 After the Samsung Galaxy Note 7’s accident related to the battery explosion, the South Korean company didn’t want to make its flagship phones support fast charging. However, this year’s Galaxy S22 Ultra supports 45W charging. It is the fastest charging smartphone of the brand. In some sense, it sounds odd because many other smartphone makers have released models supporting even 165W charging. But we have what we have.

Gold Z Flip 4 should be interesting.

The tipster also revealed that the display on the Galaxy Z Flip 4 body cover will be larger. The size of the outer panel may exceed 2 inches.

Read Also:  The Galaxy Z Flip 4 appears on a benchmark with a Snapdragon 8 Gen 1+

Under the hood, our protagonist will host the newly upgraded Qualcomm Snapdragon 8 Gen 1+ flagship processor. The latter uses TSMC’s 4nm process but still has a “1+3+4” three-cluster architecture design. Like the original chip, the super core is the Cortex X2, which is capable of providing outstanding performance.

In addition, the machine will have two built-in batteries. One of them will have a capacity of 2400mAh and the other a capacity of 903mAh. The typical total battery capacity is going to be 3400mAh. This is 100mAh more than the previous generation Galaxy Z Flip 3.

Prior to this, the Galaxy Club reported that Samsung would launch three foldable devices this year. The first two are apparently the Galaxy Z Flip 3 and Galaxy Z Fold 3 successors. But we still have no idea what model the third foldable is.

Previous After a global outage, Microsoft's Xbox Gaming service is back online