Samsung has been doing a great job in providing Android updates for some of its smartphones. However, there are always some devices that will inevitably have to wait long periods. After all, the company has a huge myriad of smartphones to cover, and the list only grows every year. Naturally, the older devices will start to lose support, but there are still a few devices that are exceptions. Anyway, today is the day for all the Galaxy M22 owners that have been waiting for Android 12. The device is relatively new, being launched in September last year. The device arrived with Android 11 and is finally received its promised Android 12 update. Interestingly, the new update comes with One UI 4.1 straight out of the box with Samsung’s latest goodies for its smartphones. After the Galaxy M30S, tit’s time for the M22 to get a taste of Android 12.

The Samsung Galaxy M22 is getting the One UI 4.1 update that also brings the April 2022 security patch. This obviously, isn’t the most current version. However, this is a low-end smartphone and we assume that the company finished the testing with the April revision. Worth noting, that this is also the Core version of One UI. Therefore, some of the features available in higher versions will not be available in this smartphone. However, the Core build has been available since the launch, so it’s not like Samsung is downgrading this device. 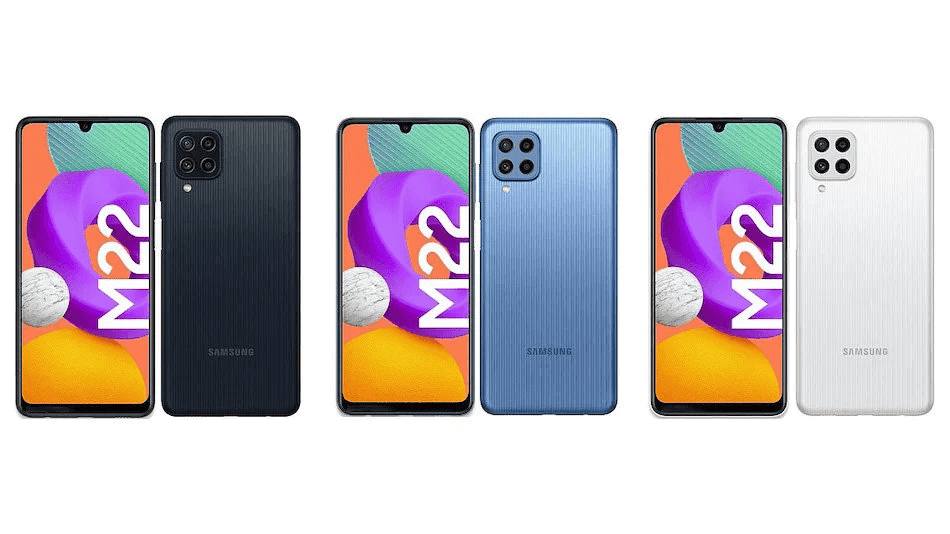 The Galaxy M22 update carries the build number M225FVXXU4BFD8. At the time of this writing, the update is rolling out in Saudi Arabia and the United Arabian Emirates. However, we expect the company to expand the update rollout to more regions pretty soon.

As a low-end smartphone, the Samsung Galaxy M22 is very modest in specifications. However, there are interesting specs in the package. For instance, it packs a 6.4-inch Super AMOLED screen with a 90 Hz refresh rate and a Full HD+ resolution. Under the hood, the phone will carry a MediaTek Helio G80 processor with Mali-G52 MC2 GPU. Moving around to the back, the device has a Quad-Camera setup. The device has a 48 MP main camera with Optical Image Stabilization. There is also an 8 MP ultrawide shooter, a 2 MP macro, and a 2 MP depth sensor. There is also a 13 MP selfie snapper. The handset draws its powers from a 5,000 mAh battery with 25 W fast-charging support. Finally, we have a side-mounted fingerprint scanner.

Theoretically, the Galaxy M22 is eligible for one more update to Android 13. However, time will tell if Samsung will be able to honor this.

Next OnePlus Nord gets stable Android 12 update with OxygenOS 12