Recent reports reveal that the Windows 11 ARM flashing project has made new progress. According to reports from China via a Weibo tech blogger, @Sunflower2333, the Xiaomi MIX 3 5G smartphone has been flashed into Windows 11 ARM. Furthermore, the smartphone with this system currently supports GPU acceleration. Previously, Lumia 950, Lumia 950 XL, Mi 8, OnePlus 6T, Mi MIX 2, Mi 6 and other mobile phones have supported the Windows 11 ARM system. 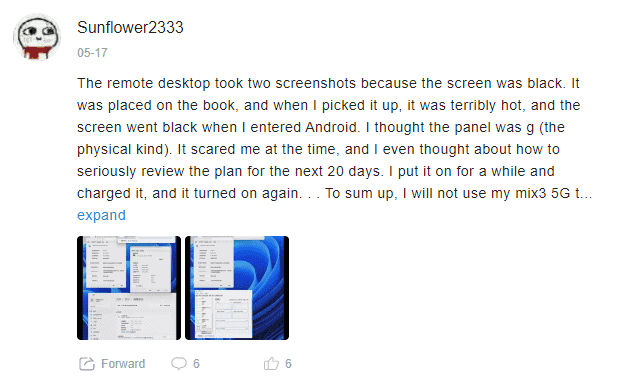 Microsoft has officially stopped supporting Windows 10 Mobile. However, with the efforts of the WoA project developers, there will still be developers to flash the new system for the old models. A group of independent developers has been maintaining an unofficial Lumia Windows on ARM project for the past few years, and it’s Lumia WOA, as Microsoft provides a Windows 10 version compatible with ARM devices. Now that Microsoft has released the Windows 11 ARM version, there are new systems to try.

Microsoft recently announced that Win11 is now available for broad deployment. This means that any PC with Windows 11 minimum configuration requirements should be able to install the system. Microsoft officially released the Windows 11 system more than seven months ago. Although there were many problems with the system at first, with the introduction of more cumulative updates and the upgrade of more devices, most of these major problems have been solved. Presently, the system is now safer to install.

Just a few weeks ago, Microsoft announced that the 21H2 version of Windows 10 was also widely available for deployment. This update for Windows 10 was released around the same time as Windows 11. Nevertheless, because it was a much smaller update, it was naturally ready for widespread deployment earlier.

If you do not have Windows 11, you should be able to get Windows 11 updates by checking for updates in the Settings app. Of course, your computer will need to meet the minimum requirements to run this operating system.