The Realme C30 smartphone’s India launch could be around the corner. The device has already bagged multiple certifications. Realme is prepping to launch its next budget phone. The handset’s key details including RAM, storage, and colors were tipped earlier this week. Notably, the upcoming C-series phone will be available in two configurations. Moreover, buyers will be able to choose between three color options. Now, more shreds of vital information about the Realme C30 have surfaced online.

The upcoming Realme C30 has been spotted on multiple certification websites. Further, this is a major sign that the phone is on the verge of going official. Now, the C30 has passed through the FCC, EEC, and NBTC websites. Moreover, the phone has even been certified by the NBTC and TÜV Rheinland. Notably, the Realme C30 has bagged the BIS certification as well. This is a confirmation that the Realme C30 will launch in India in the coming weeks. Further, these listings suggest that the C30 will be a 4G-ready phone. 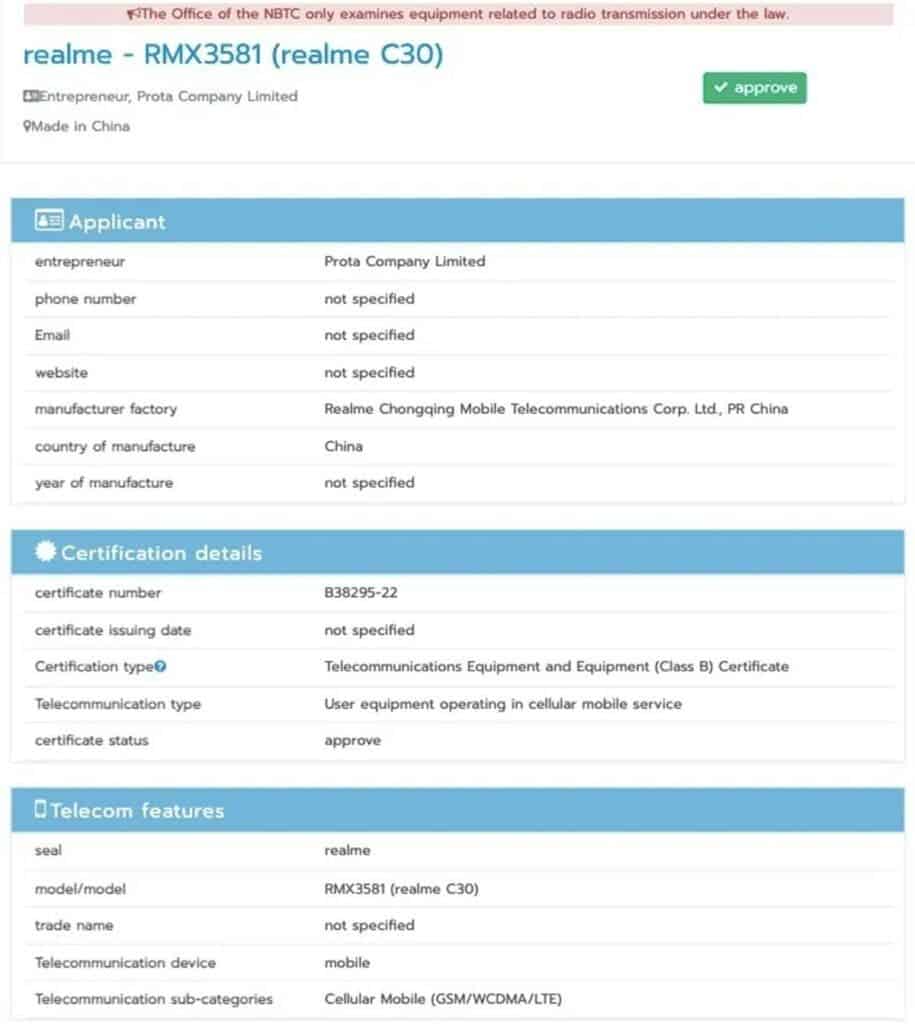 Also, it confirms the presence of a 5,000mAh battery. This cell supports 10W charging support. The Realme C30 will provide Bluetooth and Wi-Fi connectivity options. According to a past leak, the phone could launch in June this year. MySmartPrice spotted the Realme C30 on multiple certification websites with key details. Further, the publications claim that the phone has model number RMX3581. Also, the NBTC listing confirms the handset’s moniker. It also reveals that the phone will support 4G connectivity. The FCC listing divulges details about the phone’s battery.

As per the FCC listing, the Realme C30 will get a large 5,000mAh battery. Further, the dual SIM phone will support Bluetooth and 2.4GHz Wi-Fi for connectivity. The listing reveals that the phone’s dimensions are 164.1×75.53×8.48mm. Moreover, it suggests that the Realme C-series weighs 181 grams. Now, the TÜV Rheinland certification shows that it will support 10W charging. The Realme C30 appears on the BIS certification website with the same model number RMX3581. Further, the site claims that the phone will be manufactured in Noida, India.

To recall, the Realme Pad X appeared on the BIS certification site recently. Also, the word on the street is that the Realme C30 will launch in India next month. Further, past leaks suggest that it will be a budget offering. Moreover, the phone could boot Android Go Edition. It will be available in a 2GB RAM + 32GB storage model. Alternatively, you might be able to buy a 3GB RAM + 32GB storage variant. Moreover, the C30 will reportedly come in three color options. These include Lake Blue, Denim Black, and Bamboo Green. Realme’s Madhav Sheth had previously confirmed that more C30 series phones will go official in 2022.

Previous Boat Wave Neo Smartwatch Goes On Sale In India Today, Get 69% Off

Next Instagram Introduces 1 Minute Music For Reels & Stories In India