The first Google tablet has been the talk of the town for a while. Recently, at the Google I/O keynote, the company teased the upcoming product, namely the Google Pixel Tablet. The latter will hit the stores next year. And we know, this tablet will sport the company’s in-house Tensor chips like the Pixel smartphones. Today, from the Universal Stylus Initiative (USI) website, we learned that the Google Pixel tablets are expected to support the USI stylus.

USI is an organization that maintains a standard specification for interoperable styluses. They ensure that styluses work on a variety of touchscreen devices, including smartphones, tablets, and PCs. Google has been a member of USI since 2018 and has added support for USI in Chrome OS. 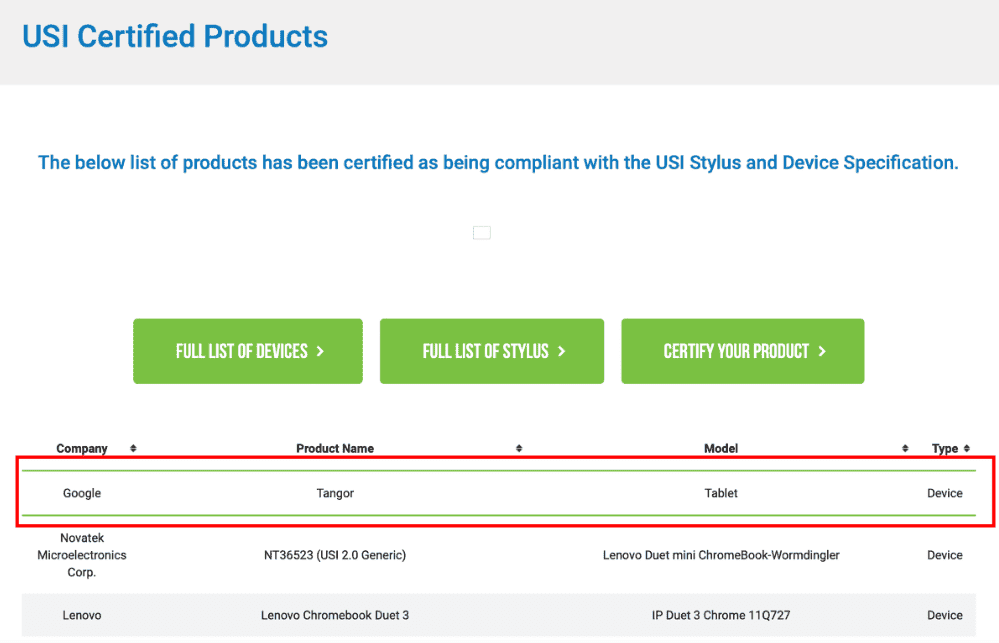 From the picture above, we can see that the Google Pixel Tablet code-named Tangor has appeared on the USI website. This listing confirms that the tablet has been certified by USI to meet USI Stylus and device specifications.

Rich Miner, Google’s tablet chief technology officer, said in the Android Show live broadcast in March: ” If tablets really are going to become this new device for people to be creative and productive, what new apps would take advantage of people who may be doing things stylus-enabled out of the gate?”

For the time being, the company hasn’t disclosed much about the Google Pixel Tablet. But recently, 9to5google made some assumptions that seem to be accurate.

For instance, it should come with the Smart Display feature. We mean this will allow the tablet to work with a stylus. Of course, stylus support is not going to be a selling point. But in most cases, it ought to have a positive impact on buyers when thinking of purchasing or not the tablet.

Another assumption refers to the stylus charging. There are two options – USB-C or AAAA batteries. But if Google brings wireless charging, this can play a big role.

Also, the team behind Android Tablets has confirmed its curiosity about pen input and figuring out “what new apps would take advantage of people who may be doing things stylus-enabled out of the gate.” So we shouldn’t rule out the possibility that Google might be working on interesting features that can be implemented through styluses.

Well, the scarcity of information doesn’t allow us to make many assumptions. But looking at what we have, there is every reason to think that the Google Pixel Tablet will become a direct competitor to the iPad and the likes.

Next Honor 70, 70 Pro and 70 Pro+ smartphones introduced with good cameras