Remember Letv brand? This brand has achieved a good popularity a few years ago in the Chinese market thanks to the Letv smartphones series. These devices were quite good for their price bringing an aluminum finish and good Qualcomm Snapdragon and MediaTek chipsets. The devices were later rebranded to LeEco branding, and we even saw the rise of some LeCool smartphones in a partnership with Coolpad. However, the small smartphone maker fell into limbo due to poor administration. There were countless stories pointing to a terrible administration that threw the company and the smartphone business into bankruptcy. Apparently, not everything is gone. Last year, LeEco emerged from the ashes with some TWS wireless earbuds, and Letv also launched a smartphone. Now, it is introducing a new smartphone dubbed Letv Y1 Pro. Worth noting that it does not come close to older LeTV smartphones such as Le 2 and its variants.

The Letv Y1 Pro is a super-budget smartphone, that looks like an iPhone 13 knockoff. Honestly, this is super nostalgic. All those that lived the clone wars in the Chinese market will remember how many knockoffs we used to see on the web. Even mainstream Chinese companies used to copy one or two elements from western brands. Now, the story is different, and the big Chinese brands such as Oppo, Xiaomi, Vivo, and Honor have basically smashed the small brands that used to make knockoffs. Letv is certainly trying to appeal to those who wanted to have an iPhone but can’t pay for it.

The Letv Y1 Pro comes with a similar design, but a super low pricing point. The Letv Y1 Pro will try its luck in the Chinese market at just CNY 499 ($75). That has been a while since the last sub-100, and you may be wondering what are the sacrifices made to achieve this pricing point. Under the hood, the Letv Y1 Pro packs a super-budget Unisoc T310 processor. This chipset is modest with 1 x ARM Cortex-A75 core clocked at 2 GHz and 3 x ARM Cortex-A55 cores clocked at up to 1.8 GHz. Obviously, this is a 4G-only smartphone. Interestingly, it packs up to 4 GB of RAM and up to 256 GB of Internal Storage. There is also support for micro SD cards. 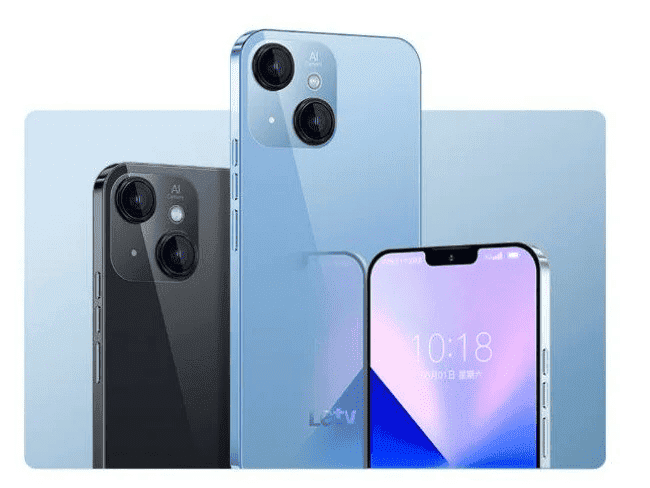 The Y1 Pro flaunts a 6.54-inch LCD screen with an HD+ resolution of 1,560 x 720 pixels. The device weighs around 208 grams and measures 164.3 x 77.7 x 9.5mm. Unfortunately, there is no fingerprint scanner in sight. The company really wants to follow Apple and is offering Face Unlock. The device has a modest 5 MP selfie shooter, and a main dual camera. There is an 8 MP shooter and an unnamed AI lens. The phone draws power from a 4,000 mAh battery. It has a USB Type-C port but there is no sign of fast charging here. One of its biggest downsides is Android 11, and it’s hard to have hopes for an update from a company that still needs to prove itself.