That’s not a secret that the best combination of hardware and software makes any smartphone device rank first. For many years, Apple’s iPhone has been known for such a combination – its hardware is made for its software, and vice versa. Anyway, now, we are going to talk about the best Android phones. Today, AnTuTu released a report, showing which Android smartphones entered the top ten in three categories of flagship, sub-flagship, and mid-range. The lists introduce the best phones in May.

The Snapdragon 8 Gen 1 is undoubtedly the best chipset in the Android camp. Its presence means we are dealing with a flagship phone. So that’s not surprising to see the best Android phones in the category coming with the mentioned SoC.

However, it is not perfect. We know that the chip uses Samsung’s 4nm process node, which has some heating issues. That’s why the newly-announced Snapdragon 8 Plus Gen 1 replaces it with TSMC’s identical manufacturing process, which is proven to be more stable. Anyway, the first smartphones powered by this new chip are not available on the market yet. and the Snapdragon 8 Gen 1 still dominates in the category. 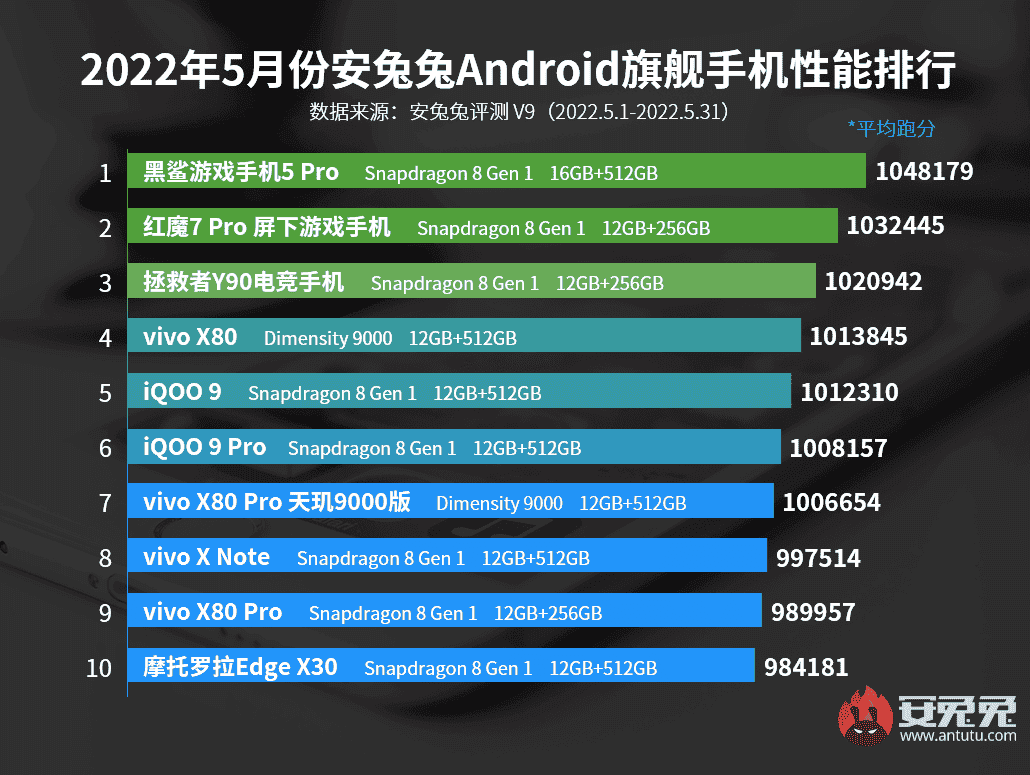 Nevertheless, the Black Shark 5 Pro could win the race due to the SSD+UFS 3.1 combination. The latter greatly improves the storage capacity of the mobile phone. Therefore, the MEM performance is far ahead of the competitive models. On contrary, the Red Magic 7 Pro takes advantage of active air cooling and heat dissipation. It comes with a built-in custom small fan. Thanks to it, the CPU/GPU maintains high frequency for a longer time.

Though the Legion Y90 combines the two solutions of Black Shark and Red Magic, coming with both SSD+UFS 3.1 combination (640GB top version only) and active air cooling, for some reason it ranked third.

Well, there are also two models with the Dimensity 9000 on the list of the best Android phones. The VIVO X80 ranks fourth with an average score of 1,013,845. We guess the GPU performance of this chip falls behind the Snapdragon 8 Gen 1. That’s why it appeared in the fourth place only.

Eight out of ten models come with MediaTek processors. Most of them use the Dimensity 8100, which appeared not long ago.

The first model on the list of best Android phones in the sub-flagship category is the VIVO S15 Pro. It has an average score of 814,995. Under the hood, it carries the mentioned Dimensity 8100 processor. 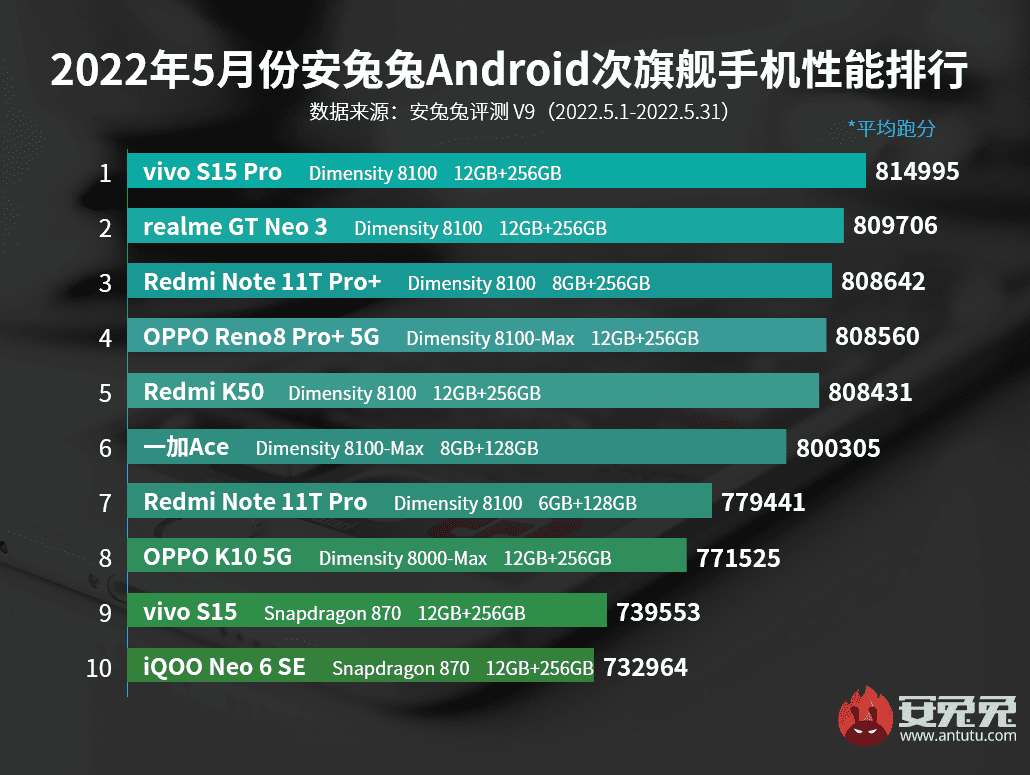 The second and third models are the Realme GT Neo 3 and the Redmi Note 11T Pro+. The average scores are 809,706 and 808,642, respectively. Generally talking, all three models come with similar configurations. So it’s logical to see identical scores.

What About Mid-Range Models?

The list of best mid-range Android phones didn’t change much. The reason is that many manufacturers slowed down the speed of launching new smartphones in this category. Anyway, most of the models sport the Snapdragon 778G chip. But there is one handset powered by the Dimensity 900. 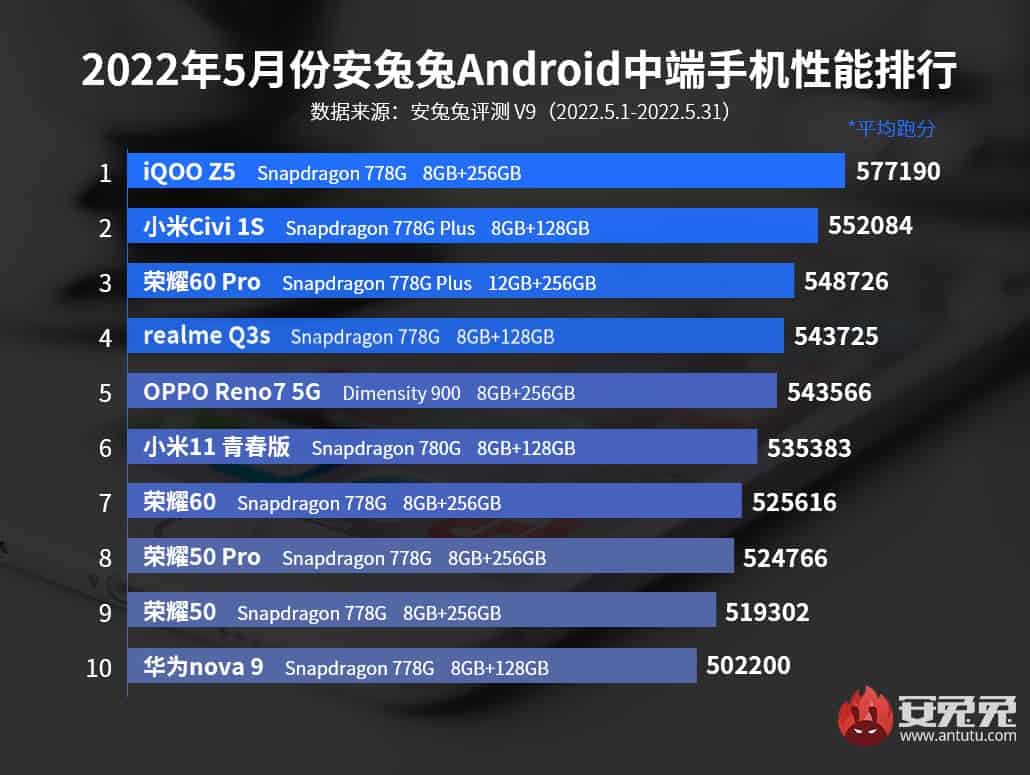