Apple‘s WWDC conference usually serves for the Cupertino-based company to unleash new updates for its operating systems. The company actually did with the release of macOS Ventura, iOS 16, iPadOS 16, and more. However, the company has been also using the conference to reveal new hardware time and time. Today, the company decided to take the long-rumored Apple M2 processor to the stage. The company is finally ready to move to the next generation and leave the Apple M1 behind. The company’s first custom-designed ARM-based computer chip was unveiled in November 2022 and became a huge success and a right step in the company’s future in the computer scene. Now, the Apple M1 gets a new proper sequel in the form of the Apple M2. The processor caused an intense dispute between component suppliers, and now it’s ready for the overall consumers.

As expected, the new Apple M2 gives performance to the new Apple MacBook Air and the new MacBook Pro 13-inch. The new chip uses the company’s second-generation 5 nm process. According to the company, when compared to the Apple M1, the CPU gives 18 percent better performance. That’s a significant increase, and we’re talking about an eight-core processor. The new Apple M2 may not perform better than the recently released, Apple M1 Pro, Max, and Ultra. However, these should get their “M2” tier update in the next years. The performance gain is achieved with a larger cache for performance cores. The efficiency cores also get some tweaks to improve the performance without depreciating the power consumption. 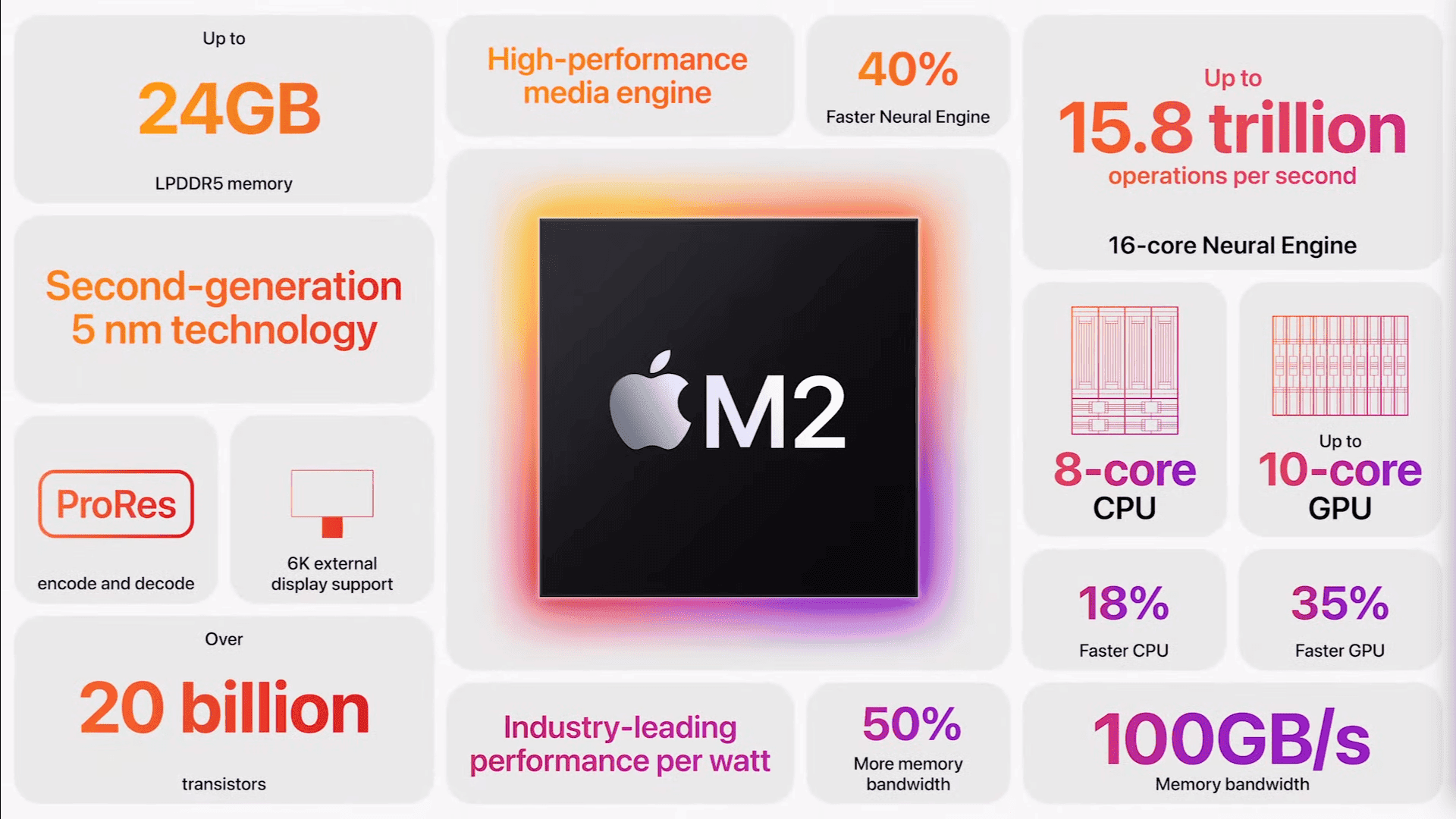 Apparently, the GPU cores are almost the same. However, they do bring some rounds of improvements as well. As per the company, the Apple M2 with 10 cores can deliver 25-percent better performance than the Apple M1 octa-core GPU, everything at the same power draw. With an extra power draw, then the performance gain can rise up to 35 percent. Apple states that this GPU is 2.3 times faster than the GPU on the Samsung Galaxy Book 2 360 at the same power level. Furthermore, it achieves the same performance using a fifth of the power.

The sixteen-core Neural Engine is 40 percent faster than the Apple M1. It’s able to process up to 15-9 trillion operations per second. It also gets a 50 percent increase in memory bandwidth, now reaching the whopping 100 GB/s amount. Talking about memory, the Apple M2 supports up to 24 GB of LPDDR5 RAM.

The new Apple M2 has over 20 billion transistors and offers support for 6K external displays. It also comes with ProRes Encode and Decode, as well as 8K H.264, and HEVC video.

We expect the Apple M2 to be present in a plethora of upcoming Apple MacBooks and iMac devices. The company will likely unleash Pro, Max, and Ultra versions of the M2 in the future.