iOS 16 was more of an evolution than a revolution for iPhone users; and likely failed to convince Android users to switch platforms.

Apple recently unveiled a new version of its iPhone operating system iOS 16 at its annual developer conference WWDC 2022. Although Apple has added many features to its smartphones, such as the ability to edit or delete chats on Messages or the quick removal of duplicate photos that clutter the gallery, the update doesn’t seem to have impressed users on Android.

Indeed, our colleagues from Android Central interviewed their readers after the Apple conference. When asked whether or not iOS 16 will make them change platforms to an iPhone; Android users have widely announced that the update has not convinced them to change their smartphone. 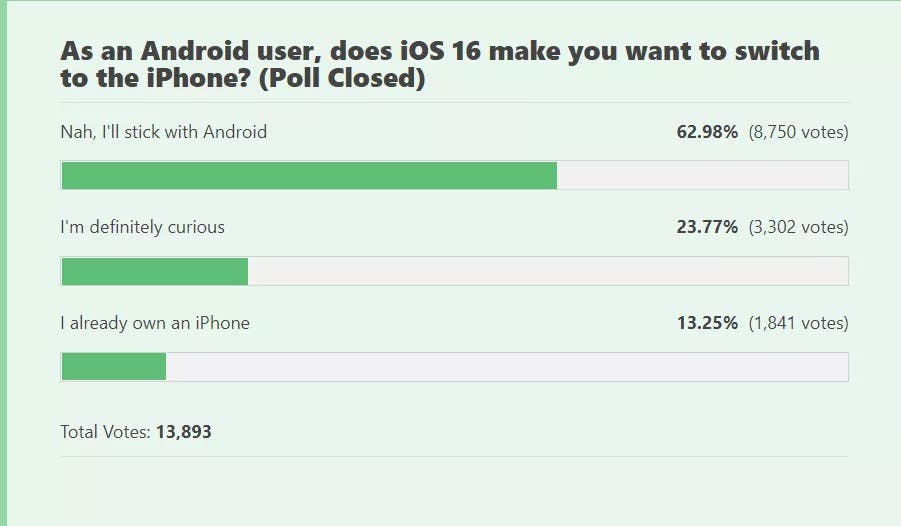 Based on 13,893 community votes, almost 63% said they would stay on Android. However, nearly 24% of users said they were curious about what’s new with iOS 16; while 13% of voters already owned an iPhone.

The features of iOS 16 therefore failed to convince Android smartphone users. Many of them mocked the new features presented by Apple; accusing it of having copied the features already present on Android for several years. Indeed, Apple has for example introduced on iOS 16 the possibility of personalizing its lock screen, a feature already present in Android for a very long time. Apple has also finally introduced Nintendo Switch Joy-Con compatibility to iPhones.

However, all the new features of the new version of iOS are not just simple copies of what Android already does very well. Apple has notably announced that security patches will now be automatically installed on iPhones, which should greatly improve their security compared to their competitors. Anyway, it seems for the moment that Android users have little to envy to Apple users on this new version iOS 16. It is hoped that Apple will resume the road of innovation next year with iOS 17.