The new Apple CarPlay interface will pave the way for a Tesla rival from the Cupertino-based tech behemoth. Notably, Apple did not show off its tvOS at WWDC 2022. Nevertheless, the company dropped major clues about its upcoming AR/VR headset at the event. Apple VR / AR headset will be the next big product from the company. Further, Apple is reportedly creating content for its yet-to-be-announced VR / AR headset in collaboration with Hollywood directors.

Despite its absence from WWDC, Apple AR/VR headset was still a talking point at the event. Likewise, Apple’s realityOS was still a hot topic at WWDC. Last week, Apple showed off the new version of CarPlay at the conference. However, the company didn’t just unveil a software update. It gave attendees a glimpse into an electric car. This is without an iota of doubt, the most exciting Apple product. Now, Apple has a reputation for launching something related to its upcoming product. 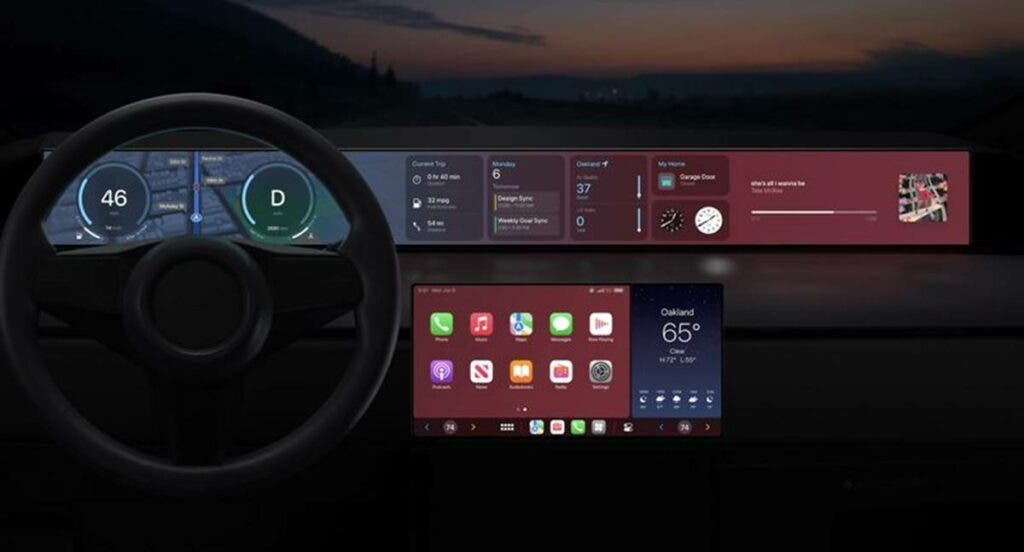 This enables the tech giant to set the stage for its product before it makes a foray into a new product category. To recap, Apple launched the iPod ten months after launching iTunes. Likewise, Apple released the Health app and HealthKit before unveiling its Apple Watch in 2015. Also, HomeKit’s debut in 2014 predated the arrival of the HomePod smart speaker. The company is currently focusing on augmented and virtual reality. It even launched ARKit about five years ago.

Moreover, Apple is bringing similar technology to its various platforms. So, the company is simply prepping for its impending realityOS and headset. Aside from this, Apple is working on the next generation of CarPlay. According to Bloomberg’s Mark Gurman, the new CarPlay was the most exciting announcement from this year’s Apple Worldwide Developers Conference. Now, a whopping 98 percent of cars in the US already have Apple CarPlay. However, Gurman predicts that the new CarPlay system isn’t likely to make an appearance on public roads for the next two years.

So, the next generation of Apple CarPlay could make its debut in 2024. Interestingly, Apple decided to announce it in parts. As per Gurman, this approach would put pressure on automakers to use the software. However, some car companies do not like the idea of Apple overtaking their interface. Nevertheless, the software could still be used in an upcoming vehicle. Leading automakers could end up competing with Apple’s future vehicles. Now, the new CarPlay does more than just let you control Apple apps. 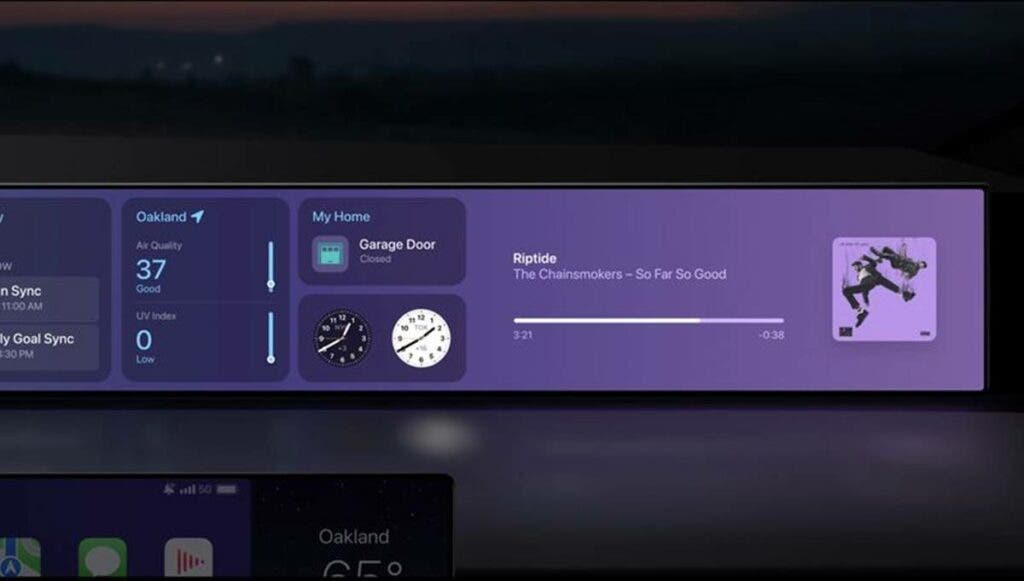 You will be able to use the new CarPlay to control an entire vehicle. Further, as per a Wired report, the next-gen CarPlay will boast an impressive array of Widgets as well. Moreover, the report suggests that you will be able to choose between multiple instrument cluster arrangements. Also, it will oust the car’s temperature controls, radio, and more. Moreover, this fully customizable interface will enable users to rearrange their instrument clusters. Likewise, they will be able to personalize their car screens.

Furthermore, users will have access to widgets for smart-home appliances. There will be widgets for music, time zones, and trip data as well. Moreover, the new interface will bring widgets for calendar appointments and weather. So, the well-designed new CarPlay interface could become a must-have feature in new cars. Markedly, it looks more like a completely new OS than a mere new version of CarPlay. However, why does Apple want to roll out this interface to other cars when it is gearing up to launch its own vehicle?

According to Gurman, Apple is sparing no effort to show off its technical skill. Basically, the new CarPlay system will build more hype around the upcoming Apple car. Moreover, the company will be able to become more familiar with the auto industry. Apple will also get a chance to collect vital data to build its own car. Also, Apple needs to ensure that people keep using their iPhones. In fact, it has to add new reasons for people to keep upgrading to new models.

Americans spend about 60 minutes behind the wheel every day, as per some estimates. If customers like the iPhone-powered in-car interface, it could stop them from switching to Android. Further, CarPlay could be Apple’s new cash cow. Automakers using CarPlay do not pay fees or royalties to Apple. The current system requires the user to connect with an iPhone. Now, most car makers do not have expertise in making In-car infotainment systems. So, they would gladly let another company make it for them. 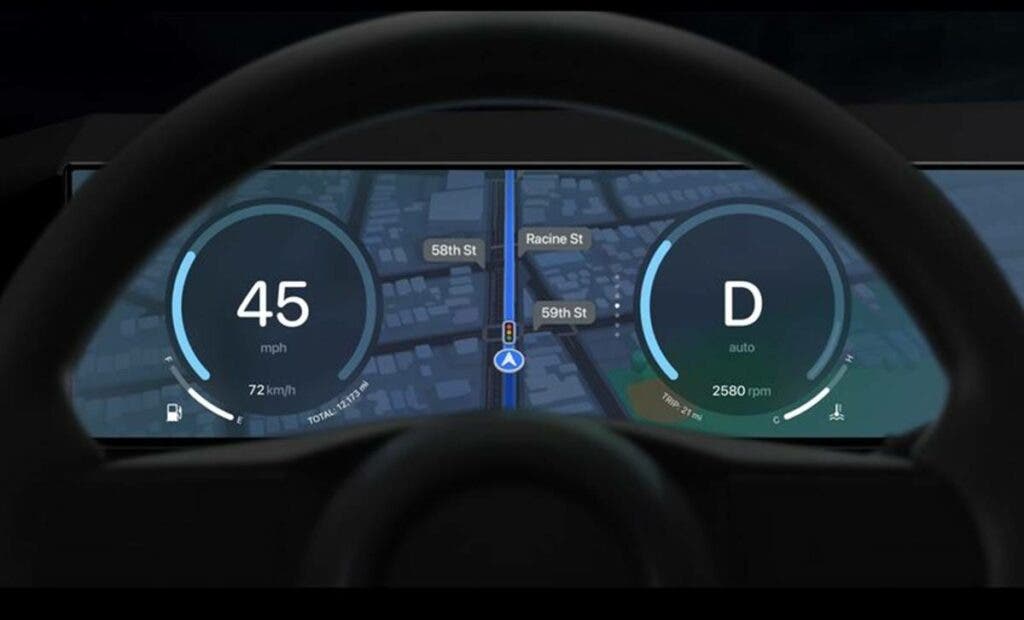 The next version of CarPlay could garner popularity among users. This would encourage Apple to create another version that doesn’t require an iPhone. Google currently has a similar system dubbed Android Automotive. The Apple CarOS could come in handy for automakers for increasing their sales and reduce expenses. This could come to fruition if they are willing to pay a royalty for Apple to manage their in-car OS.

When Is The Apple Car Set To Debut?

Apple recently dismissed several staff members working on the project. However, Gurman believes that the Apple Car is still in the development phase. He claims that Apple is currently focusing on supply-chain deals. The deal comprises the overall manufacturing of the vehicle and car parts. Further, he’s been told that Kevin Lynch has appointed some people from the Apple Watch group to expedite the development process. Lynch recently revamped the entire car management team.

Moreover, a myriad of best designers from the car industry is reportedly working on the actual vehicle’s outward appearance. According to Gurman, former Aston Martin interiors manager Duncan Taylor is part of the designing team. Moreover, ex-Aston Martin chief concept engineer Pete Jolley is involved in the project. Former Tesla engineering VP Steve MacManus is also working on the design. Lastly, ex-Porsche executive Manfred Harrer is one of the design minds working on the Apple Car’s design.

However, it will be interesting to see if Apple will be able to ship a fully autonomous car in the next three years. Even if the Apple Car comes without a self-driving feature, it could still give Tesla a run for its money.

Apple dropped several clues about its future AR/VR headset at WWDC 2022. However, it did not show off the mixed-reality headset at the event. In fact, Gurman predicts that Apple could postpone the fall unveiling as well. He believes Apple could unveil its much-awaited headset in early 2023. As stated earlier, WWDC was teeming with clues about the Apple AR/VR headset’s imminent launch. For instance, Apple announced ARKit 6 which can add 4K video capture in AR. 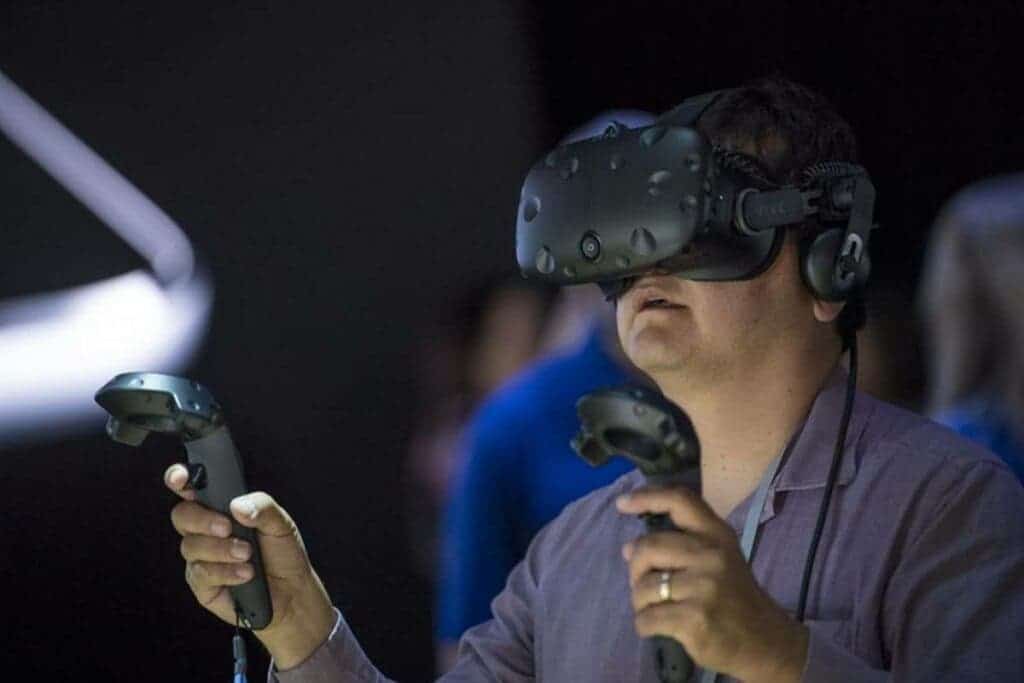 The underlying framework has been radically overhauled to power the upcoming headset. Also, the company announced RoomPlan. This new Swift API can scan a room and determine its objects and dimensions. This tech could be a key feature of the mixed-reality device. Apple also unveiled Metal 3. It now supports higher-performance gaming and enhanced graphics. Metal could be a vital part of realityOS development. Notably, realityOS will be the software running the headset.

The SharePlay experience is now available outside FaceTime. Now, users will be able to enjoy their favorite content in Messages. So, it looks like Apple is sparing no effort to make SharePlay a systemwide stand-alone feature. Apple showed off Passkeys that would oust passwords at the conference. So, users might not have to enter passwords on their AR/VR headset. It even announced a new dictation feature which will probably serve as a text input on the mixed-reality headset.

Aside from this, new scanning features were unveiled at the event. Another feature for interpreting text live was announced at WWDC. Lastly, Ray Wong pointed out that the company’s new buy now pay later service could help more people to buy the headset. Notably, Apple could be prepping to drop more vital clues about its upcoming headset in the coming days. Likewise, more clues about the actual device could surface online.

Gurman claims that the new Stage Manager is pretty confusing. He has been trying it for several days on macOS Ventura. The software lets you put one or multiple windows in front of your workspace. You can place the currently open apps on the left side of the screen for quick access. Gurman deems it as a mere multitasking layer. Moreover, it does not seem to replace Mission Control or Spaces. On the contrary, it works with them. Regrettably, he was unable to use the feature on the iPad. 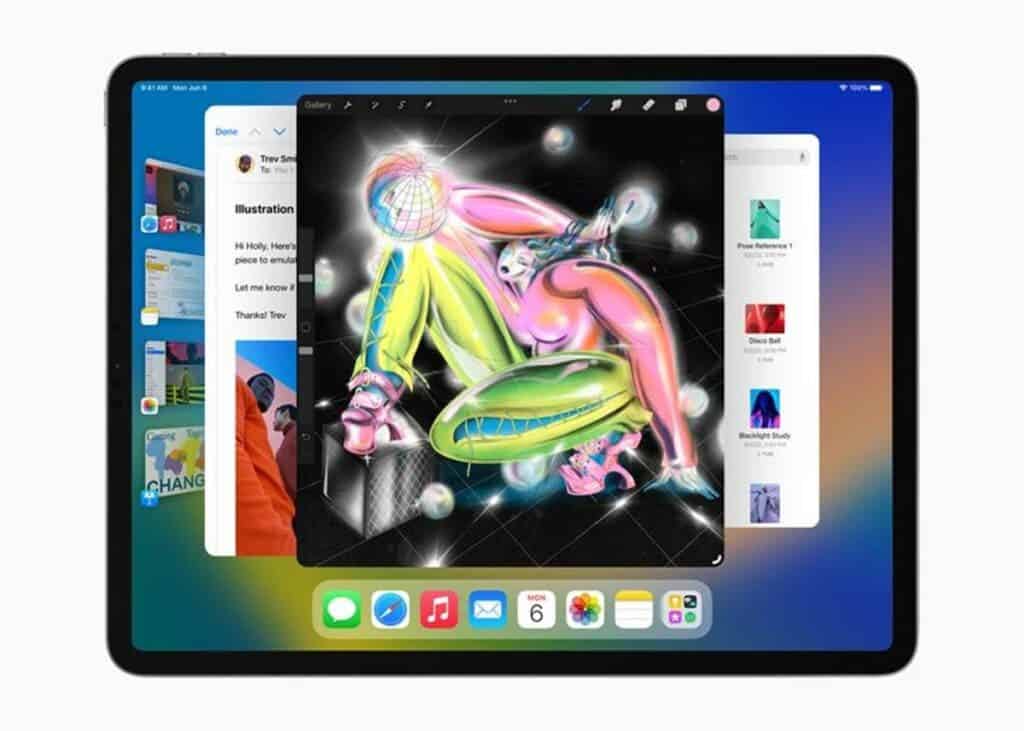 The new Stage Manager works only on an M1 model. It is incompatible with the A12Z iPad, which was launched in 2020. According to Apple, the feature requires large RAM and fast storage. Moreover, it needs a flexible external display I/O. Notably, all of these features are available on M1-powered iPads. However, Apple is bent on making its interface more consistent. So, the company wants the iPad to work like a Mac rather than an iPhone.

Stage Manager seems to precede the upcoming extended Mac display feature for the headset. However, Gurman claims that version 1.0 isn’t likely to get the feature. Interestingly, Apple did not mention tvOS at the conference. For those who are unaware, Apple TV runs on tvOS. The only notable addition to the OS includes some basic smart-home frameworks. This is known as Matter support. However, this is the first time Apple has neglected watchOS, macOS, or iOS. 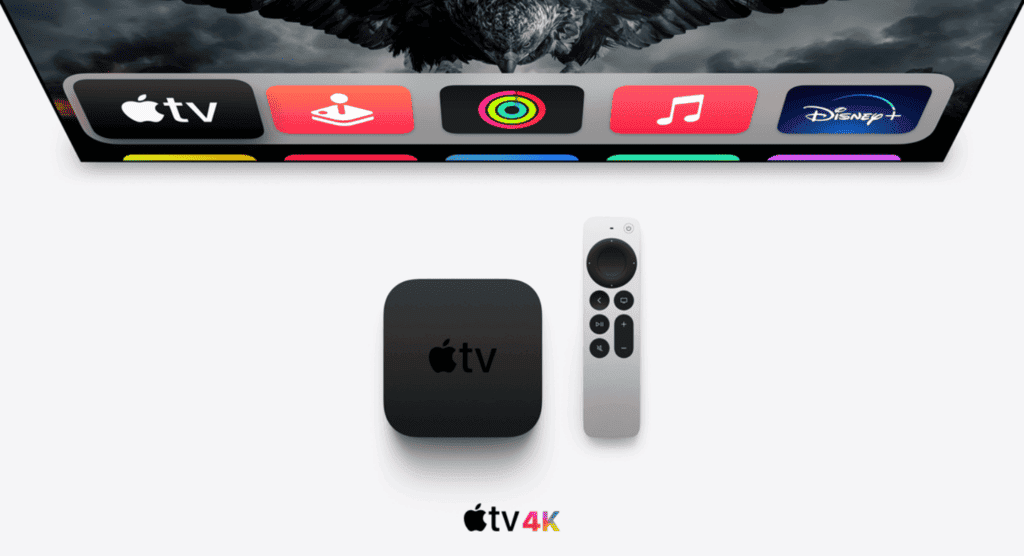 There is a possibility that tvOS not getting any stage time has to do with Tim Twerdhal’s exit from the company. Twerdhal was spearing heading the marketing department for Apple TV. He left the company last summer. Alternatively, Apple’s software team could be busy enhancing the OS for the upcoming HomePod and Apple TV. Nevertheless, the company’s focus on home and living room is not giving Apple fans anything to cheer about.