As early as May, Elon Musk, the CEO of Tesla reveals that the company is establishing a “hardcore litigation department”. According to the latest report, the team is now functioning. The main purpose of this hardcore litigation department is to initiate and enforce lawsuits. Musk made the revelation in an interview on the Getting Stoned podcast, and when asked how Tesla’s litigation team is going. Musk claims that the company is now hiring some lawyers for the team. He further reveals that some of the responders to his post on Twitter are applicants for the available roles. 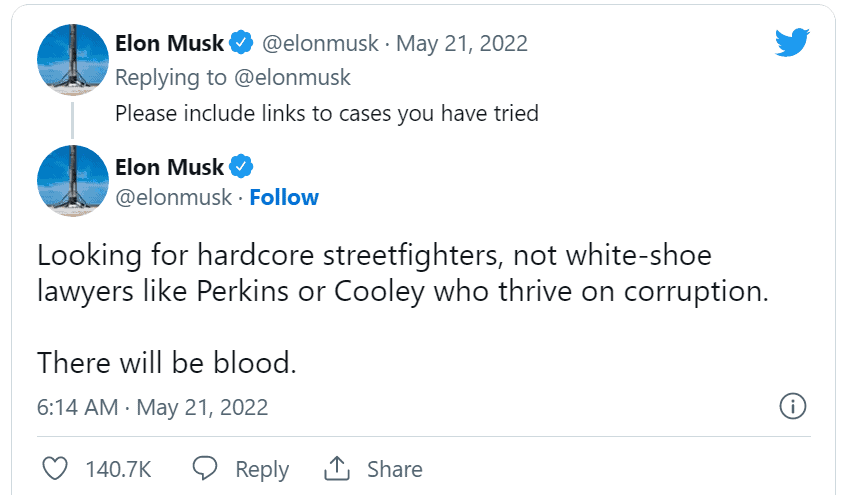 With regards to the reason why Tesla is forming this department, Musk says the attack on Tesla is too much. The company needs to have a team whose only job is to fight back or defend the company. Elon Musk said

“Tesla is being attacked relentlessly by so many people. So I think we have to have a strong litigation team, essentially fighting back. A lot of really talented attorneys have submitted their resumes, we’re looking at these resumes. We’re going to hire a bunch of people who respond to my tweets. We’re under constant attack. It’s crazy,”

The establishment of Tesla’s “hardcore litigation department” follows reports that Musk sexually harassed a former SpaceX employee. Musk has directly denied the allegations. SpaceX President, Gwynne Shotwell also claims she was unaware of the alleged incident. In the May announcement, Musk noted that Tesla’s “hardcore litigation unit” would be responsible for initiating and enforcing lawsuits and would report directly to him. He also emphasized that he was looking for “hardcore street fighters”, not “white-shoe lawyers” who thrive on corruption.

Tesla shows off a solar panel trailer with a Starlink antenna

In other reports, Tesla does a lot of things and the company recently showed a solar range extender trailer at an expo in Germany. The solar range trailer has SpaceX’s Starlink Internet satellite system. As electric vehicles become more efficient, many people are starting to consider the possibility of adding solar panels to electric vehicles to extend the range. Companies such as Aptera, Sono and Lightyear have had some success with projects involving ultra-efficient vehicles using solar cells.

However, when it comes to full-size EVs, solar panels aren’t as popular because solar energy is less efficient and doesn’t add much range. Nevertheless, many EV owners have been considering adding deployable solar panels as a portable stand-alone charging solution that can extend the range of their EVs. This week at IdeenExpo in Hannover, Germany, Tesla shows off a system for equipping trailers with deployable solar panels. The solar range extender trailer also has SpaceX’s Starlink satellite internet antenna. Starlink has recently updated its system so that its terminals can be used in moving vehicles.

If these were 300W panels, the maximum output would be 2.7kW, which would add less than 50 miles per day when unfolded and a third when folded. It’s unclear why Tesla built the trailer and displayed it at the show, but it’s not expected to be sold to the public anytime soon.

According to reports, Tesla investors this week found a series of new changes in Tesla recently. Some of these changes include disappointing quarterly deliveries. For this and other reasons, the company will shut down some factories for several weeks. Last month, media reports claims that Tesla will stop most of the production of the Model Y production line in Shanghai in the first two weeks of July. Furthermore, the company will stop the Model 3 production line for 20 days starting on July 18. Sources claim that plant upgrades to boost production of the two models should be complete in early August.

On Monday, German media, TeslaMag reports that Tesla’s factory near Berlin will be down for two weeks starting July 11. Tesla aims to roughly double the plant’s production capacity starting in August, according to the sources. Last month, the Tesla factory produced 1,000 Model Ys for at least a week. The company made no mention of those plans in its July 2 production and delivery announcement. However, it said in its announcement that it produced a record number of vehicles in June, but delivered 254,695 vehicles in the quarter, missing analysts’ expectations.

Tesla’s performance is not a surprise – analyst

Jefferies analyst Philippe Houchois has a “buy” rating on Tesla stock. The “relative weakness” in the quarter was in line with expectations, he said in a July 3 research note. He said Tesla CEO Elon Musk called the new factory a “capital melting pot” as a sign that Tesla’s free cash flow may have been severely impacted by the disruption to working capital.

The biggest impact on Tesla’s performance last quarter came from the shutdown of the Shanghai factory due to the epidemic. However, Tesla has taken various steps to push the factory back to work and keep it running.

Currently, the Shanghai factory is Tesla’s most productive factory. Meanwhile, Tesla’s factories in Berlin and Austin, Texas have just started production. Musk held groundbreaking ceremonies for both plants on March 22 and April 7. However, compared to when the new factory opened, Musk seems to be more low-key now. On May 31, Musk told the “Silicon Valley Tesla Owners” channel: “Berlin and Austin are now losing billions of dollars because there is a lot of spending here, but there is hardly any output. Let Berlin and Austin lose getting the plant up and running and getting the Shanghai plant back on track is our overwhelming concern.”

Previous Aurus Merlon, A Russian Motocycle Is In Tests

Next iPhone: Apple is working on a touch screen that we can use even when wet