For global users, the motivation to switch phones is getting weaker as the years move on. This is one of the major reasons why the overall smartphone shipment globally continues to decline. New figures released recently by Canalys show that global smartphone sales/shipments fell 9% year-on-year in the second quarter. The reasons for the latest decline aren’t new, pretty much all a bunch of them you’ve heard of in the past few years. 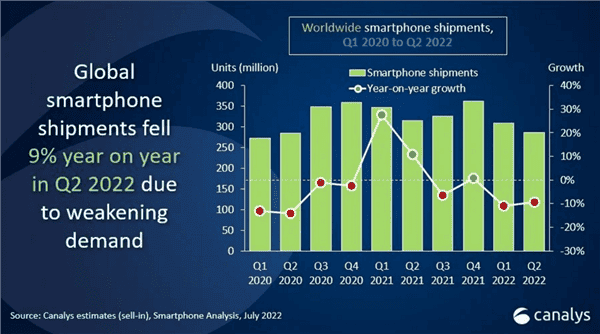 As the design of smartphones gets better and more powerful, they require more expensive parts and components. Similarly, consumers are also slowing down their upgrade cycles because successors are no longer a significant upgrade. In the process, the phones themselves have also become more expensive. Of course, the expensive prices naturally add a sense of caution among consumers amid economic uncertainty including unemployment and inflation. Furthermore, chip shortages and supply chain bottlenecks are also making the process more difficult. We can see that the industry is generally facing a hard time.

The innovation of mobile phones is stagnant and more expensive. The motivation for upgrading is lower and the global economy is not optimistic, etc. Given all of the above, it should come as no surprise that low-end and mid-range devices have been driving the remaining purchases. Most notably, Samsung’s A-series, which helped the company retain the top spot and increase its overall market share from 18% to 21%. During the quarter, Apple and Xiaomi swapped market shares at 17% and 14%, respectively, with Apple taking the second spot, driven by demand for the iPhone 13.

Read Also:  No One Buys Tablets Anymore: The Tablet Shipments Dropped A Lot

Like Xiaomi, Chinese phone makers Oppo and Vivo also lost market share this quarter, accounting for around 1% each. In the opinion of experts, bad news for smartphone shipments has become the norm. This is a trend that actually predates the start of COVID-19 but has only accelerated during the pandemic due to various economic and supply chain impacts.