Intel wants to get a slice of the super competitive graphics card market. The company will launch its first-generation Ruixuan desktop graphics card for global markets in the near future. It has recently introduced an entry-level Arc A380 in China. However, the chipmaker wants to go forward with a higher-end offering. The company will bring the Arc A770 and A750 graphics cards for those who want extra hardware prowess. Today, some details of the first Intel Graphics cards have been revealed.

Intel has previously introduced the Xe-HPG Scavenger Hunt event. During the event, fans can find hidden information from Intel’s official social media content and win the Arc A770 / A750 alone. According to Intel’s announcement, among the two prizes, the Arc A770 will bring an impressive 16 GB of video memory. The Performance version of the Arc A750, on the other hand, will bring 8 GB of video memory. The Intel graphics cards certainly won’t come to be embarrassed.

In addition, Intel acknowledges the delays in the release of the Sharp desktop standalone display. However, the company states that things are moving in the right direction. The highly-anticipated release is getting closer and closer according to the firm. Getting back to the point, the company states the first samples of the Ruixuan A750 will be sent soon and the company will start the testing phase. After that, the product will be sent to the media. 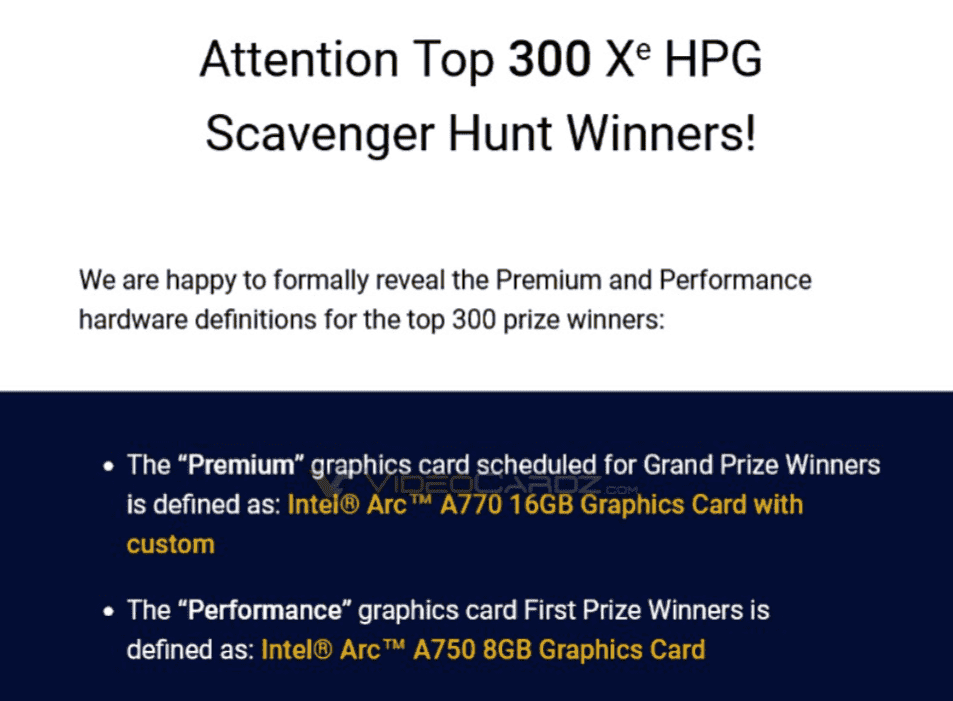 According to the rumors, the price of these two Intel graphics cards will sit below the 400 dollars mark. The A770 boasts a complete ACM-G10 GPU with a main frequency of 2.4 GHz, including 4096 ALUs. There are also 32 Xe cores and 32 ray tracing units. The default GPU frequency is 2.5 GHz, and the GPU power consumption is 190 Watts. After overclocking, the power consumption can reach 285 Watts.

Despite the ongoing inflation, we may see prices dropping in the GPUs and CPU departments.