In the first half of 2022, the European electric vehicle market continued its strong growth with 633,200 green cars registered, up 31% from 485,000 registered in the same period in 2021. Now the share of electric vehicles among all vehicles in the EU has reached 11.4%, according to the analytical company JATO Dynamics. But the share of Tesla began to decline.

Not all automakers have been able to equally exploit the potential of the growing market. Production at Tesla’s Berlin plant has started but has not yet reached full capacity, so the brand’s European supplies continue to depend on the Shanghai plant, which, in turn, suspended its work due to the pandemic lockdown. As a result, the company’s share of the European electric vehicle market decreased from 13.75% in the first half of 2021 to 13.33% in the first half of 2022. In June, Model 3 registrations plummeted 76% year-on-year, and this month is considered good in terms of car sales.

Tesla is losing market share in Europe, but Model Y is the most popular electric car in 2022 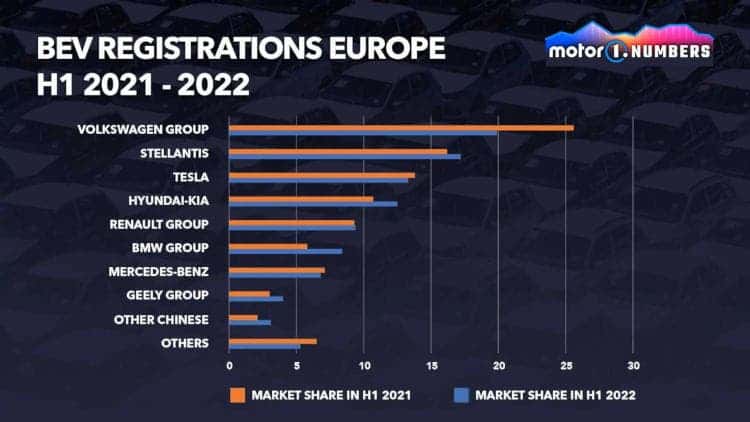 Tesla Model 3 has to fight for a place in the sun not only with the products of other manufacturers; but also with its counterparts in the model range. The direct competitors of the car are the BMW i4 and Polestar 2; while in Europe, as in the USA and China, the attention of motorists is increasing attracts the Model Y crossover. As a result, Model Y became the first in Europe in terms of the number of registrations in the first half of this year. 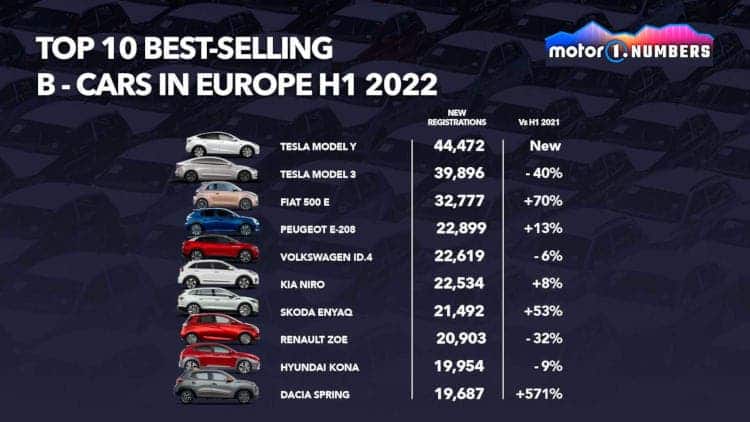 The best performer in the region is the BMW Group; which grew by 8.37% in the first half of 2022 and 5.76% in the same period a year earlier. The Bavarian electric cars iX, iX3 and i4 received a positive response from the public. The Hyundai Group is growing rapidly, paving its way with offerings such as the Hyundai Ioniq 5 and Kona; as well as the Kia EV6 and Niro. The Volkswagen Group remains the industry leader in Europe. At the same time, the most popular models in Europe are the Tesla Model Y and Model 3; followed by the Fiat 500e.