Along with numerous new products, today, Xiaomi also uncovered its second-gen folding screen smartphone, namely the Xiaomi MIX Fold 2. This is a truly outstanding device and we guess it has all chances to beat any rival. 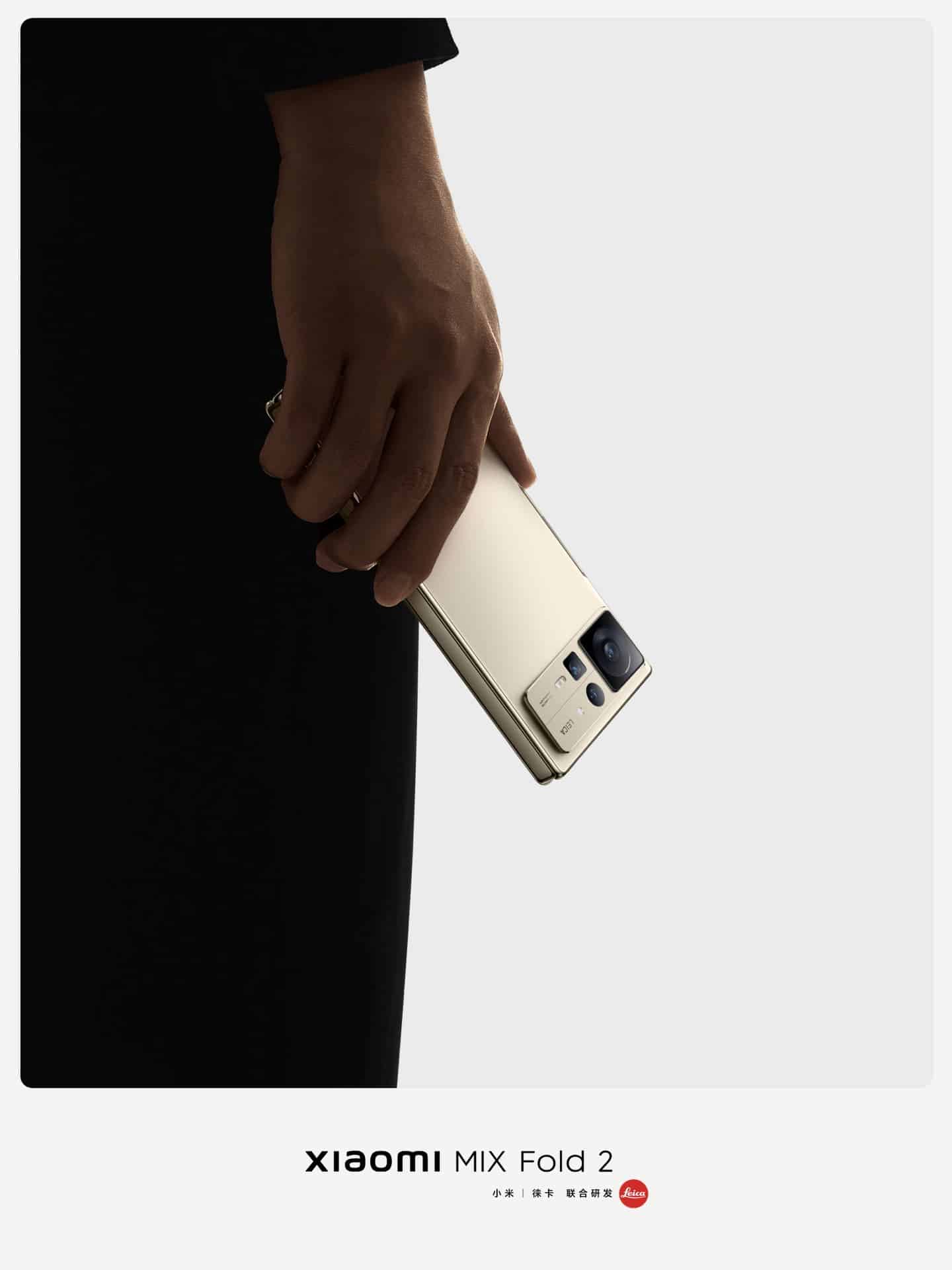 To start with, the appearance of the phone differs from the previous generation a lot. What’s more surprising, it took a year to completely redesign the first-gen model. Usually, the smartphone makers bring major changes once in a few years. 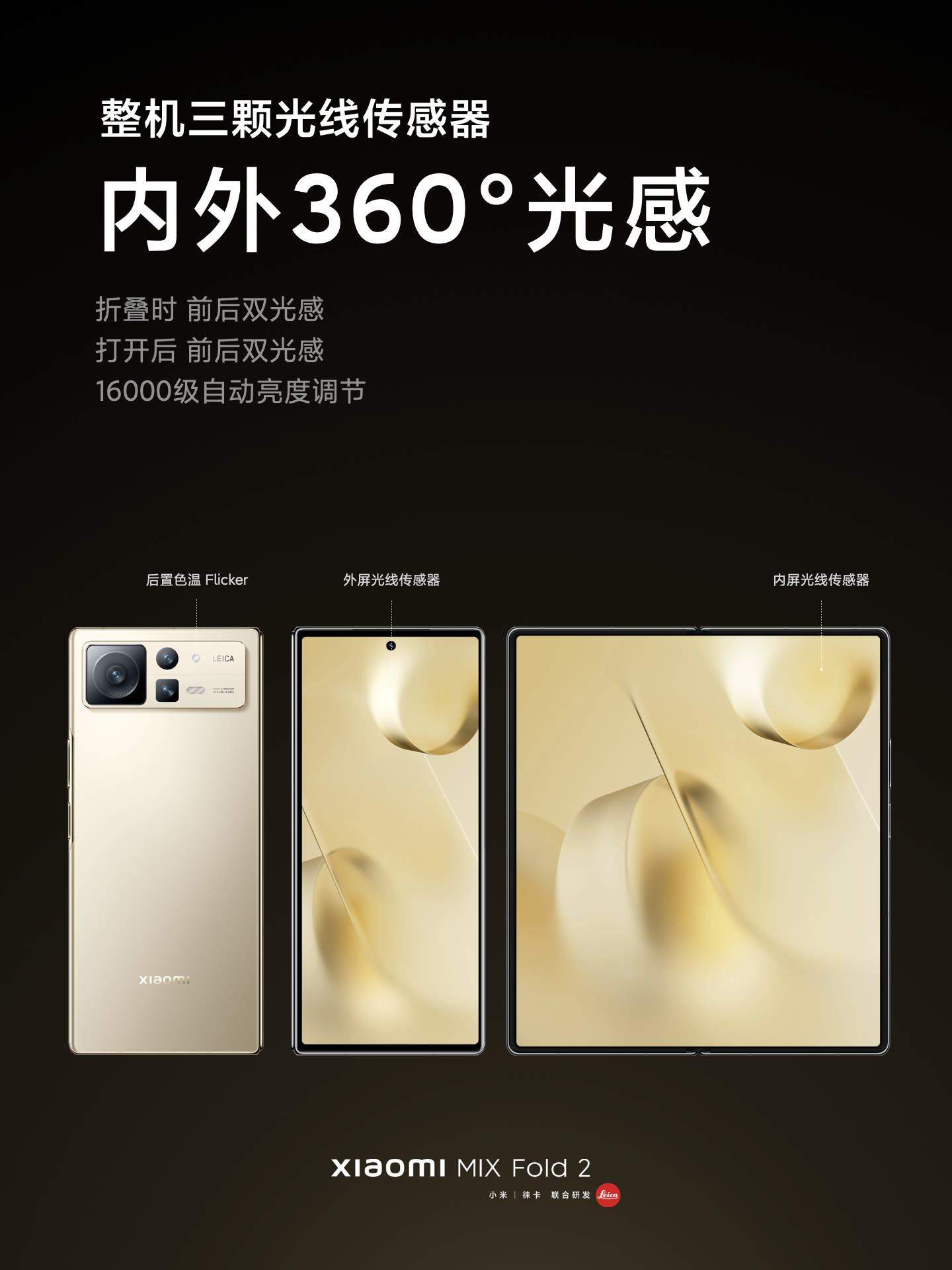 Anyway, now, the Xiaomi MIX Fold 2 has a stronger sense of business. When looking at it and holding it in hand, we have a feeling of a premium device. The frosted glass back panel is much more advanced than the glossy effect of the previous generation. Moreover, it won’t collect fingerprints. 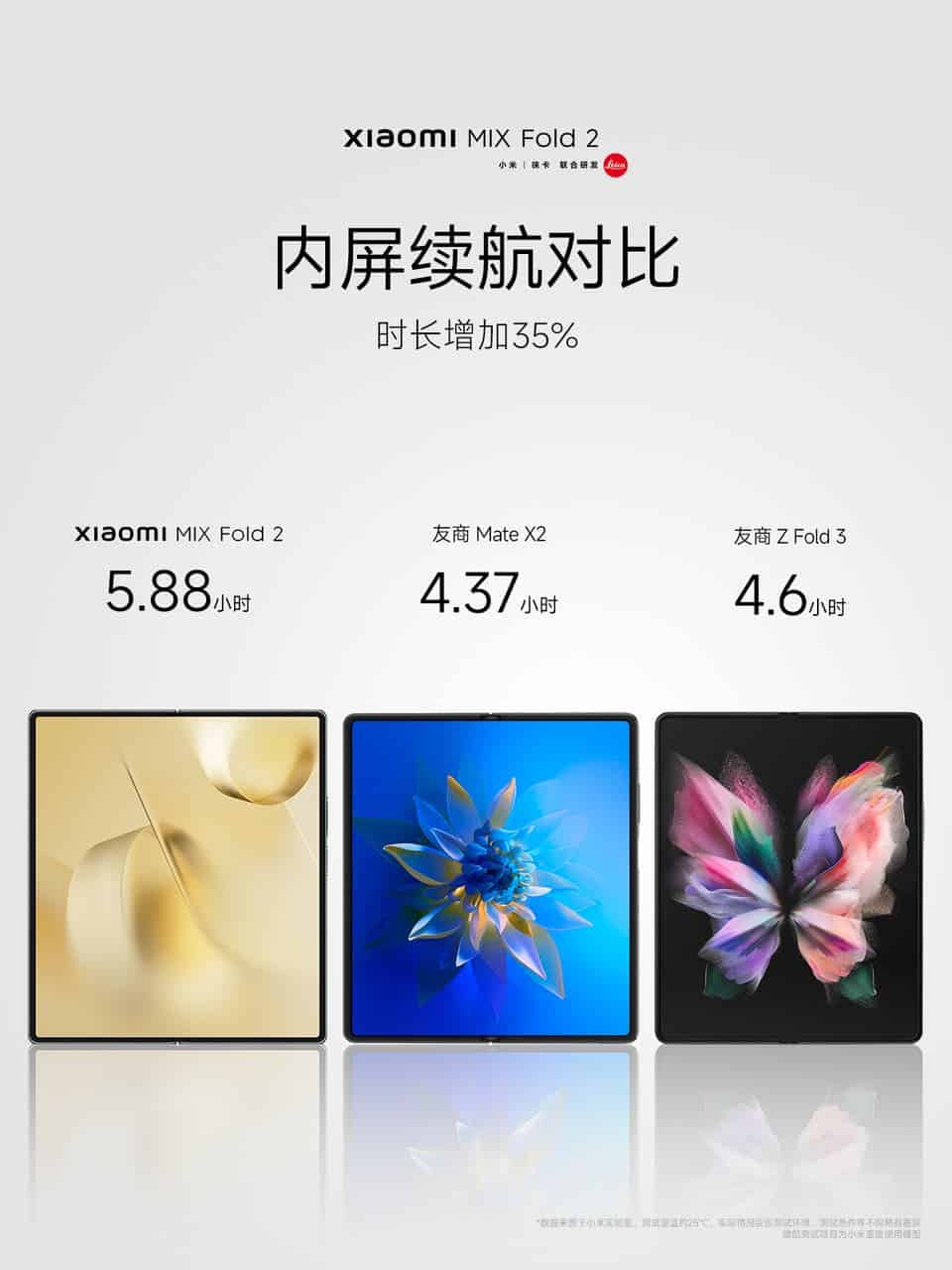 However, Xiaomi still adopts the mainstream inner folding solution. The outside screen is 6.56 inches in size and uses the Samsung E5 micro-curved screen. The curvature of the screen is very small. Also, its resolution is 2520×1080 pixels. Thus, Xiaomi bid farewell to the previous unusual aspect ratio and returned to the conventional 21:9 ratio.

Apart from this, the display supports Dolby Vision, HDR10+, and has a contrast ratio of 8 million:1. To avoid scratches, it is covered with Corning Gorilla Glass Victus.

The inner screen is 8.02 inches in size. However, it has a lower resolution of 2160×1914 pixels. Apart from this, the super-large screen has a contrast ratio of 8 million:1 and supports Dolby Vision and HDR10+. 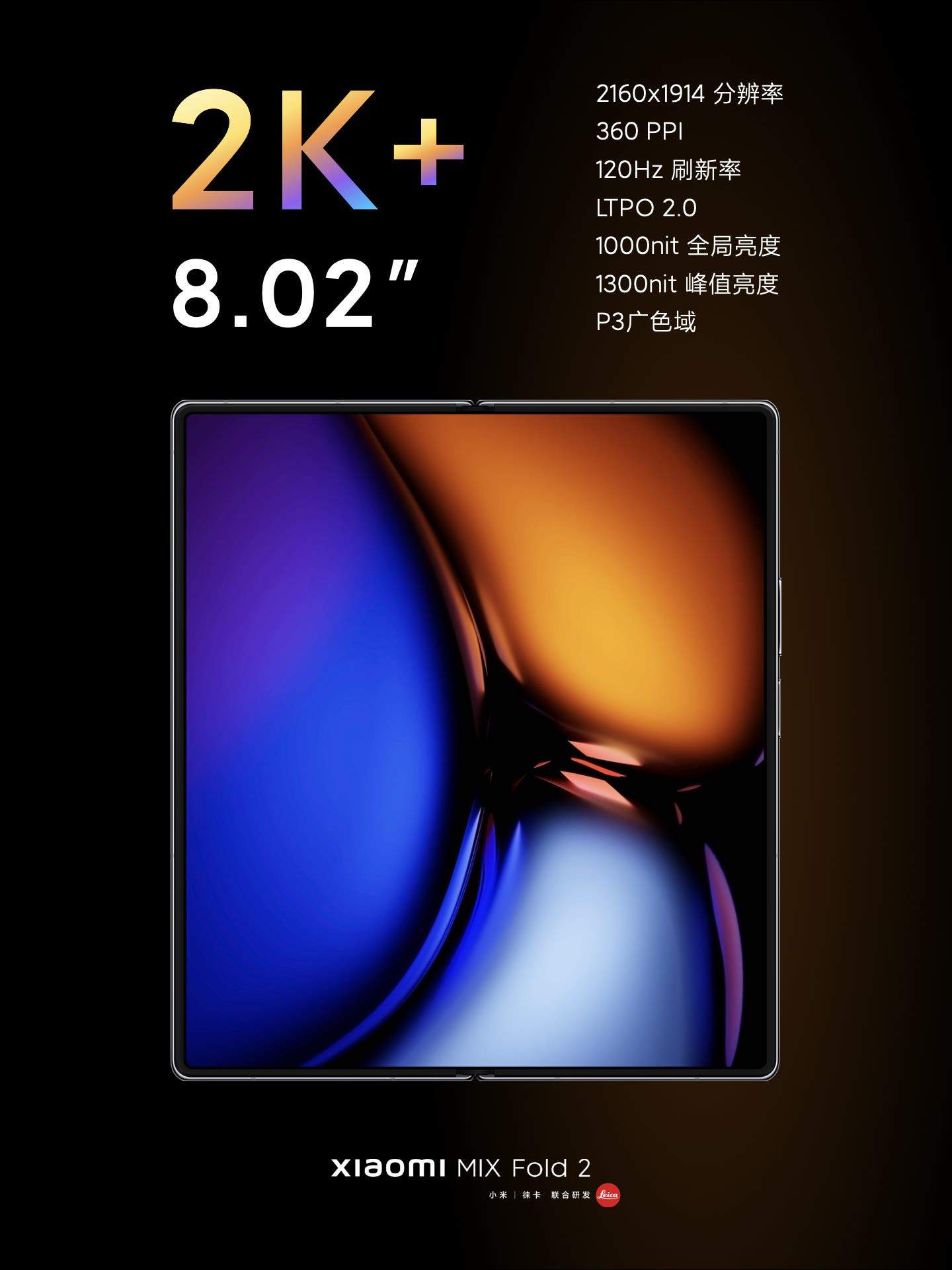 The most important thing is that both support a 120Hz high-speed refresh rate. So you won’t feel any inconvenience or difference when switching between the screens. Also, the company has made many improvements in the system to better interact with such a large-screen device. For instance, it supports three-finger quick split-screen, multiple small windows, sidebar quick small windows, and other features. 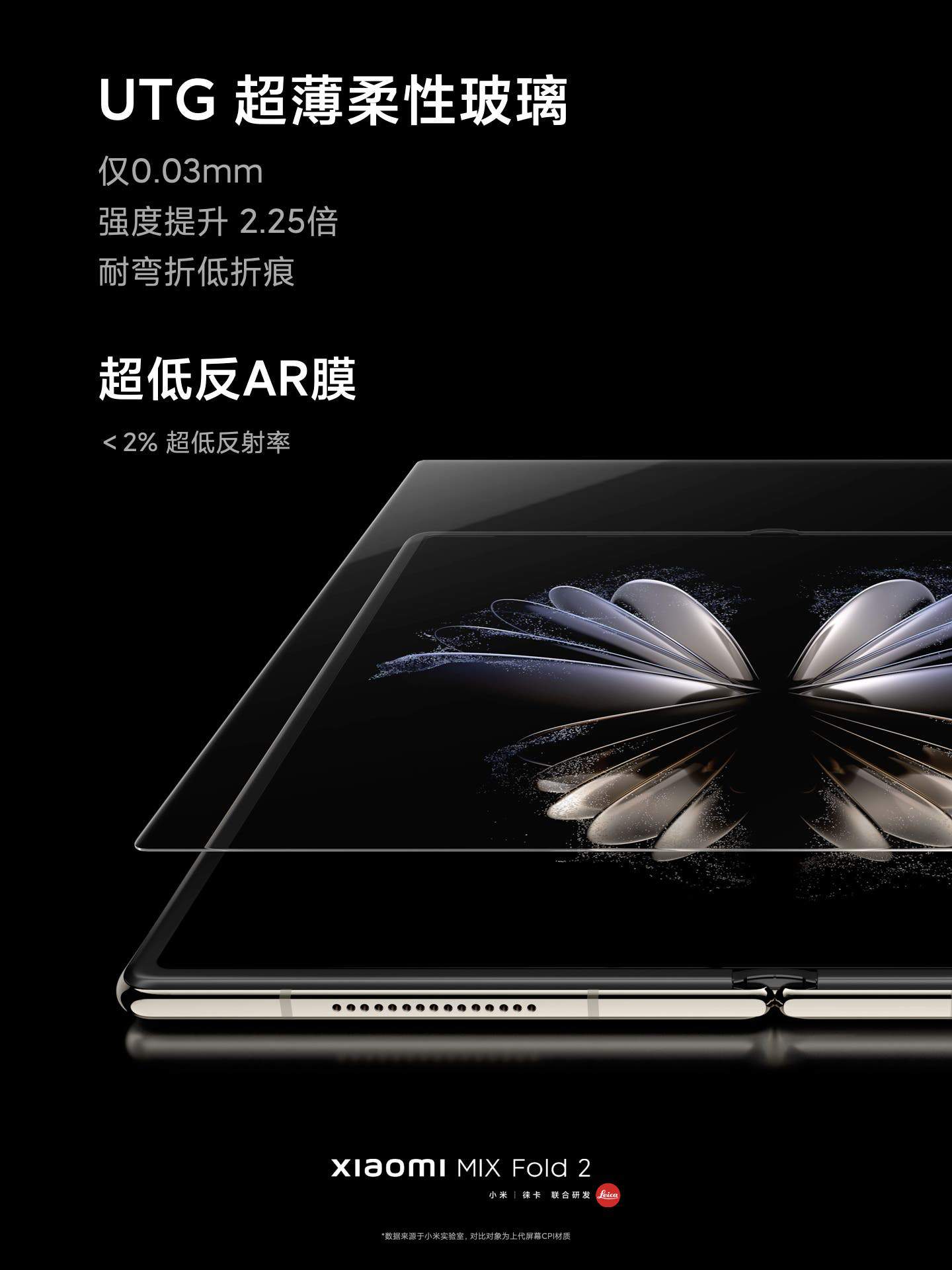 Now, let’s talk about the most important improvement of this phone – the hinge. Xiaomi uses self-developed technology. The third-generation “droplet shape hinge” reduces redundant complex structures and makes the hinge more concise. As a result, when folded, the hinge thickness is 8.8mm, which is 30% thinner and 35% lighter than the industry’s common 11 and 12mm thickness.

Thanks to this hinge, the Xiaomi MIX Fold 2 is only 5.4mm after unfolding. At the same time, the weight is 262g. 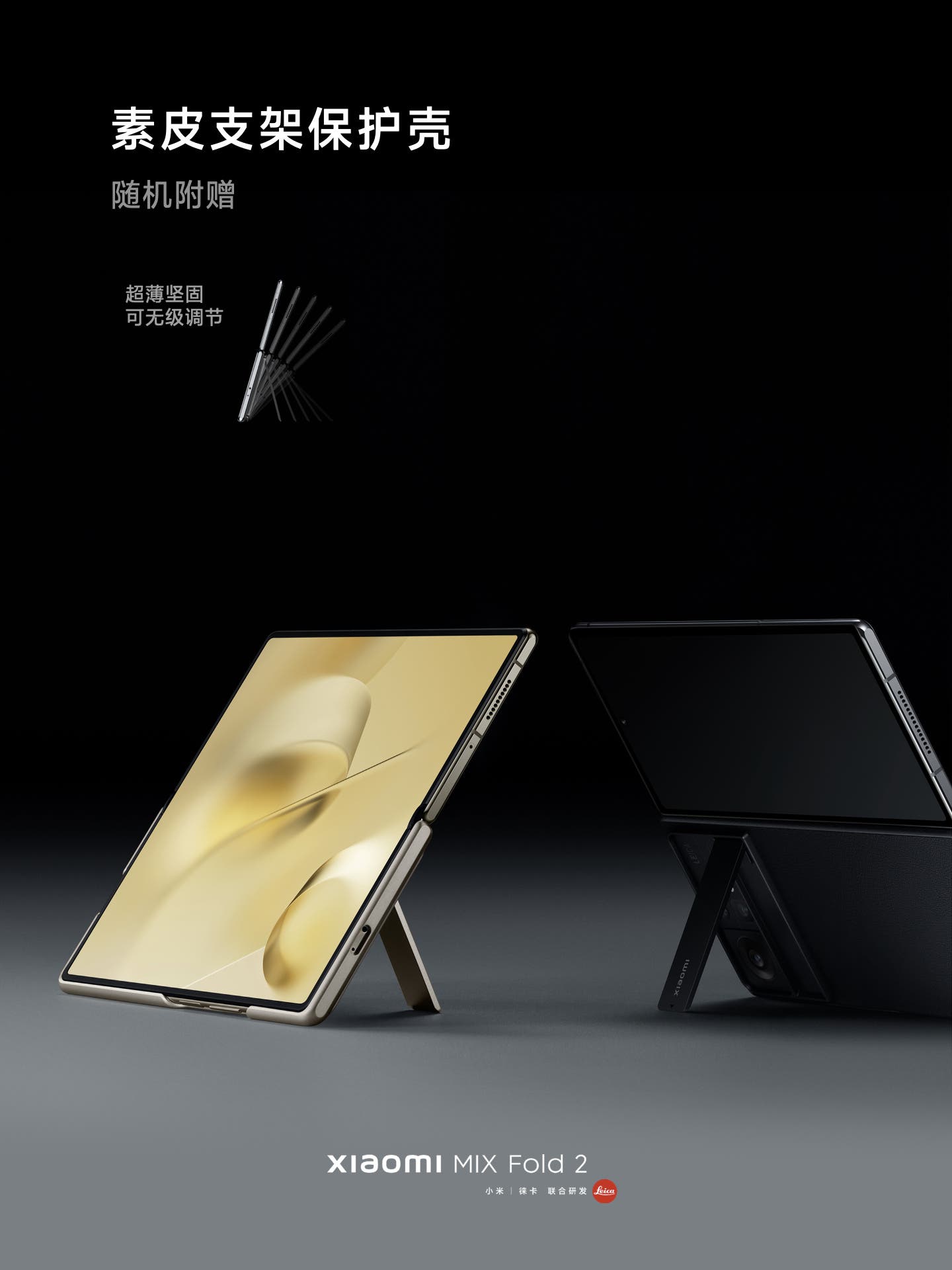 At the beginning of this article, we said that the phone brings a premium feel. Internally, it is also very powerful and attractive. Of course, the phone comes with the Snapdragon 8+ Gen 1 platform. In its turn, the chip is accompanied by LPDDR5 memory and UFS3.1 storage. There is also a large-area cooling system. 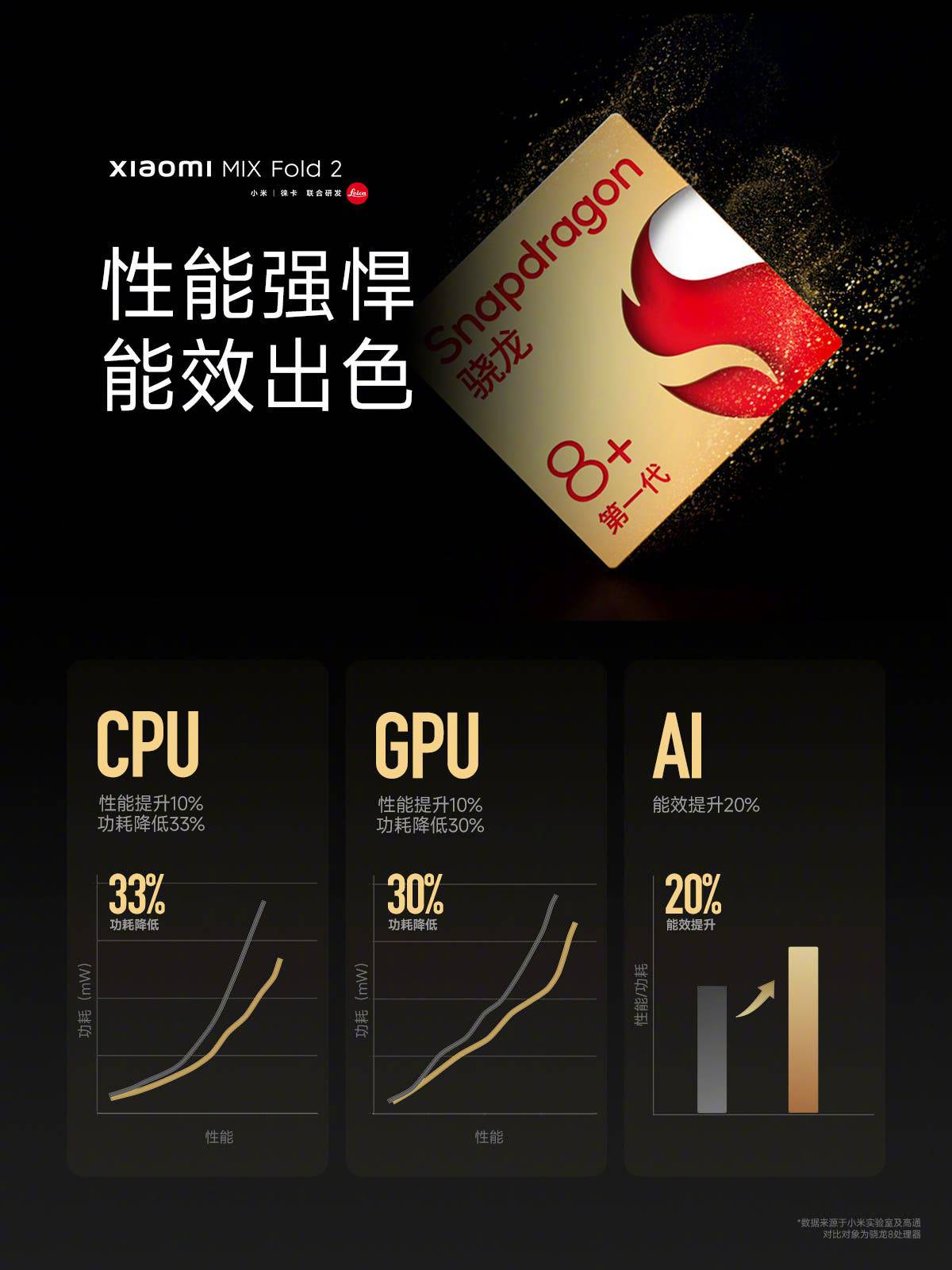 The built-in 4500mAh battery supports 67W fast charging. So the phone can be fully charged in 40 minutes.

Also, there is a triple camera on the rear. The main camera is a 50-megapixel IMX766 lens, which supports SMA OIS (optical image stabilization). Apart from this, we have a 13-megapixel ultra-wide-angle lens as well as an 8-megapixel 2x portrait telephoto lens. 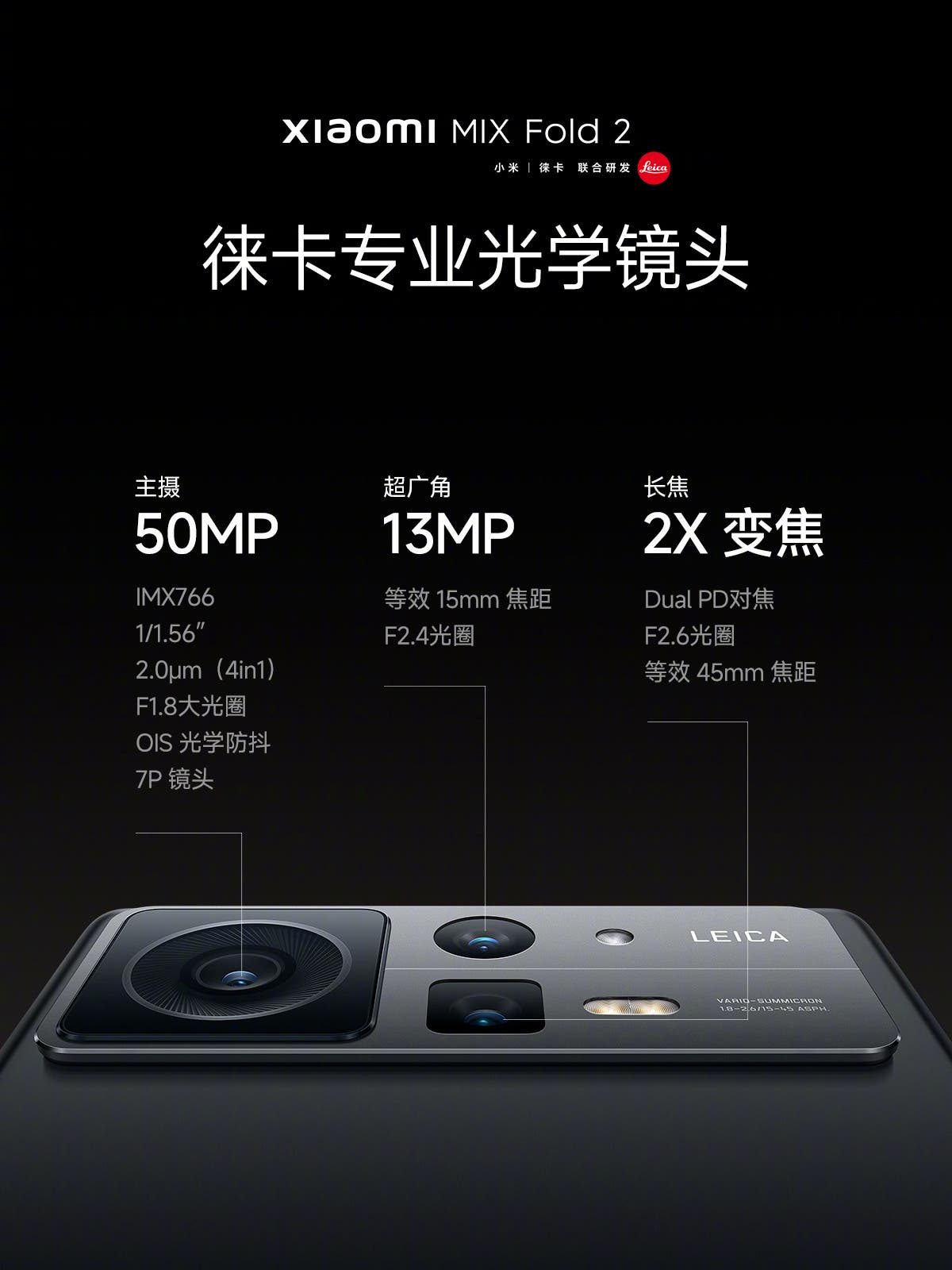 It is worth mentioning that this time Xiaomi MIX Fold 2 also supports the Leica imaging system. The latter included Leica Classic and Leica Vivid modes. Thus, it has the same camera performance as the Mi 12S series. 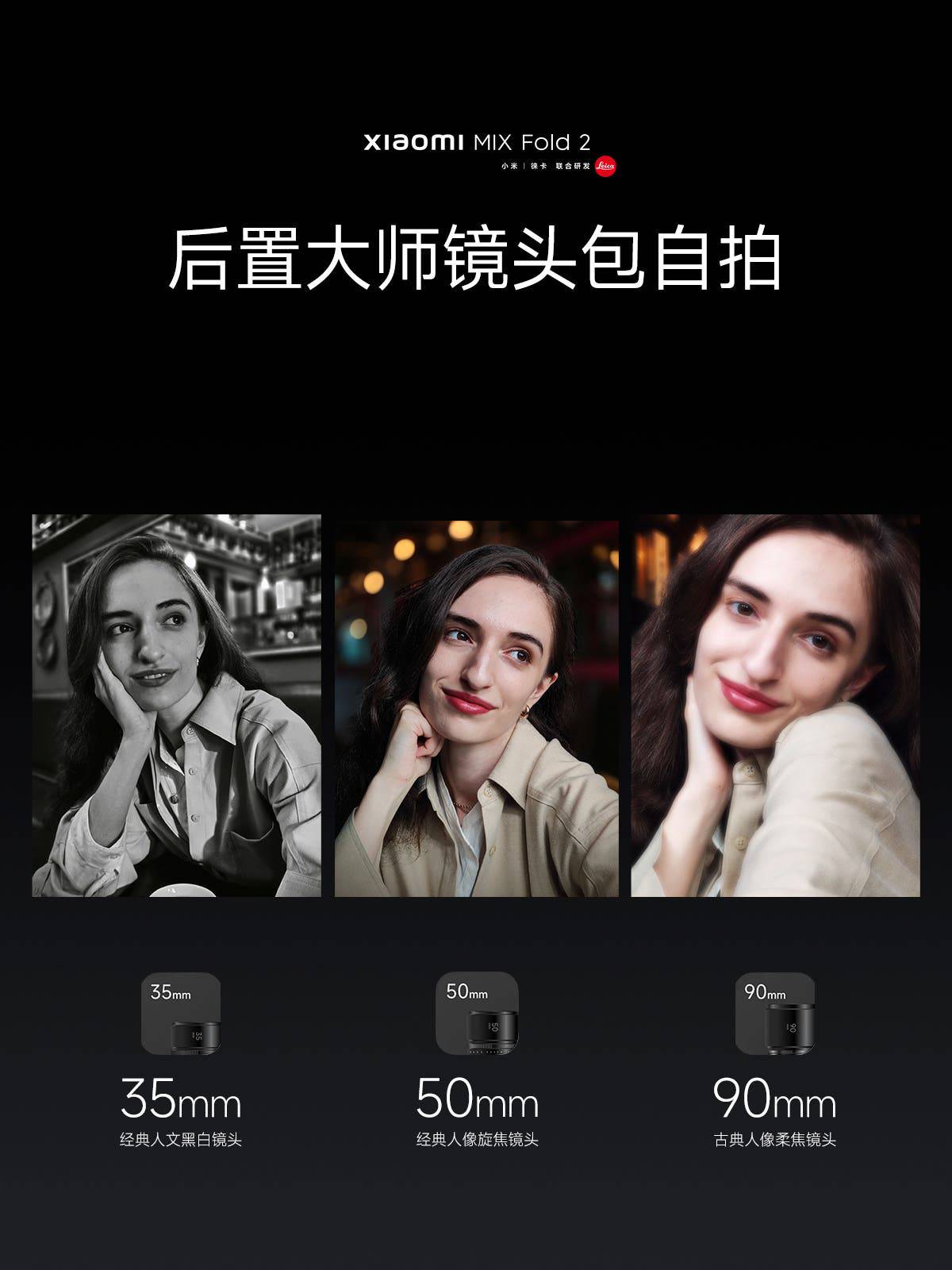 In other aspects, the new phone comes with a multi-function NFC, infrared remote control, dual speakers tuned by Harman Kardon, and linear motors. 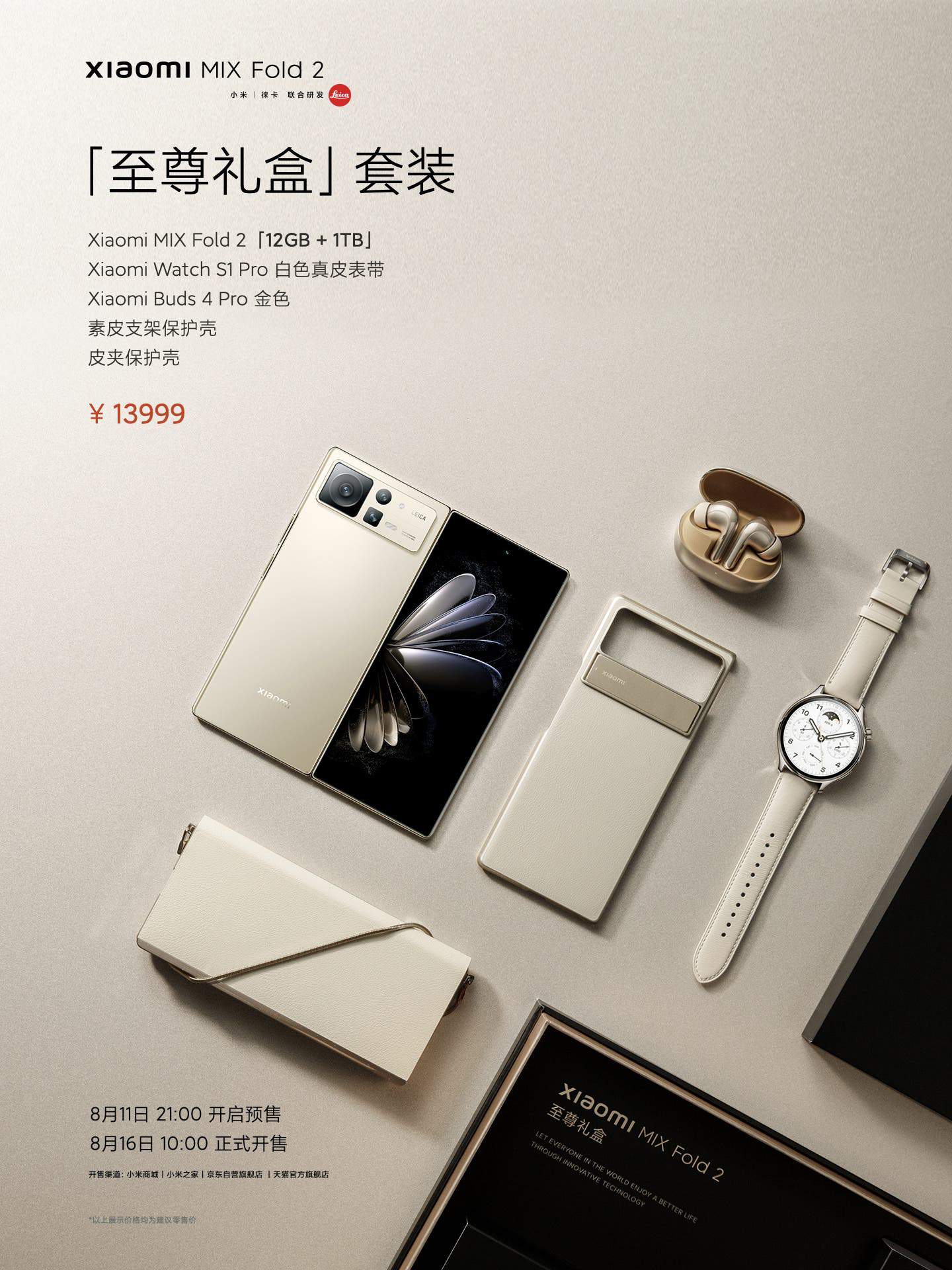