Logitech G and Tencent Games have announced an unprecedented partnership for the launch of a “cloud gaming handheld”. To those unaware, Logitech G is the gaming branch of the popular peripherals maker. Tencent Games is just one of the most important gaming companies in the current mobile gaming scene and soon will make its debut among big PC and console games. Earlier this year, rumors suggested that Tencent was trying to acquire BlackShark to firm its name on the smartphone market.

The Chinese company wants to expand its capabilities in the territory with the release of a new cloud gaming handheld alongside Logitech. Unfortunately, details are still scarce, but today the popular leakster Evan Blass, decided to share a couple of images of the handheld running Android. The images were removed shortly after the post, due to a DMCA complaint. However, GSMArena managed to push the images forward. It’s like the old saying “If it’s on the internet, there is no way to get it back”.

The design of Tencent and Logitech Cloud-Gaming Handheld consoles resembles a particular product from Tencent’s patent filings. The device in question was a “PC Console”. As usual, we have a big landscape product with D-Pad, Analog Sticks, buttons, and a Shoulder Trigger. The leaked images reveal and confirm the design of the console in a White colorway with blue and green touches here and there. Interestingly, one of the most interesting facts in this leak is the fact that it’s running Android. The experience seems to be complete with even Google Play Store. So we’re not seeing another iteration of the Steam Deck. 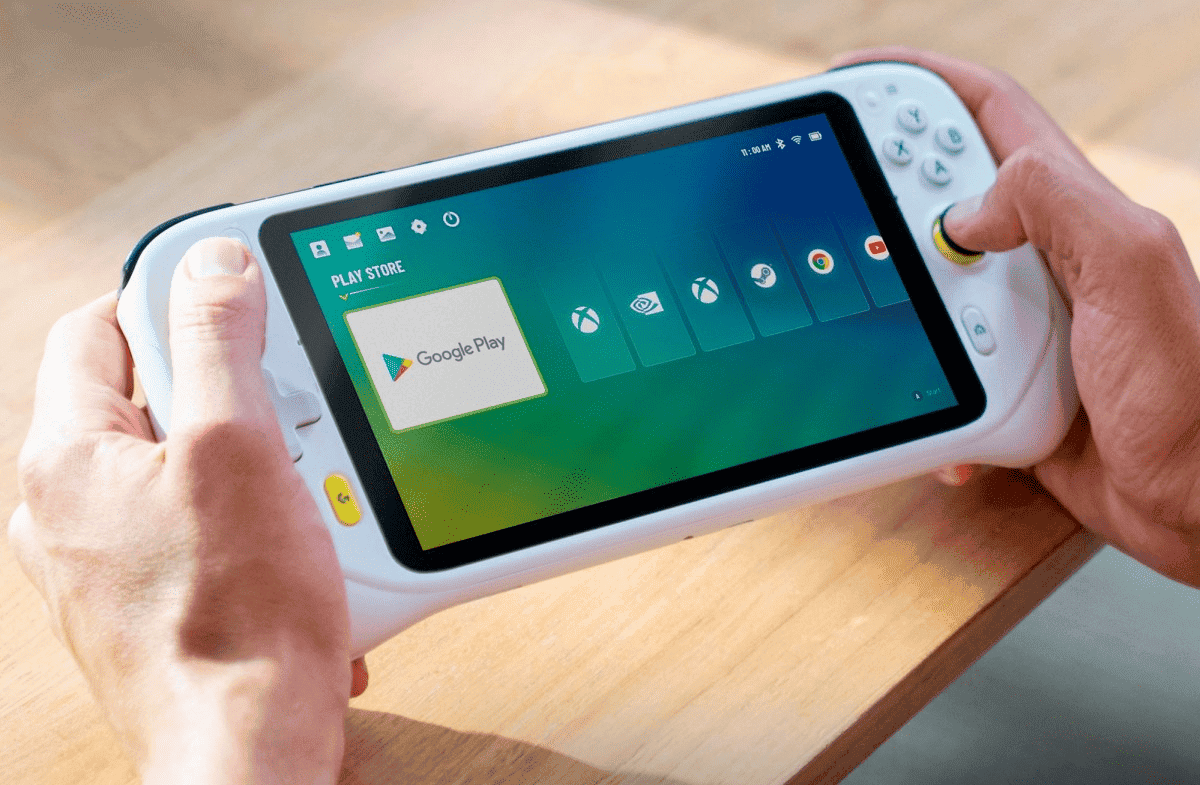 Seeing it running Android shouldn’t be a massive surprise. After all, Tencent Games is not known for its presence in the PC market. The mobile segment, on the other hand, has Tencent around most of the currently trending games. Anyway, the platform in question, may not be the biggest deal but just a plus. After all, the goal here is to provide a streaming gaming platform. Android will still provide users with a lot of possibilities, but the focus is on cloud gaming.

Logitech and Tencent are reportedly in talks with Xbox Cloud Gaming and Nvidia GeForce Now to offer both services on the platform. Interestingly, both services have Android apps, so a user could easily download the apps to enjoy the service. Furthermore, the leaked image shows the Steam icon, so we may also see Steam Link for running games remotely from your PC in this handheld console.

The image shows Wi-Fi and Bluetooth, so it’s unclear whether this product will have cellular connectivity. It would be great to have the possibility to run cloud-based games while on the go. But that seems unlikely to happen.