A few hours ago, Chinese manufacturer, Honor, officially released its latest smartphone, the Honor X40. The company held a new product launch conference in autumn and the milestone of the Honor X series mobile phone in nine years was officially unveiled. The launch event reveals that this smartphone is a mid-range device with flagship performance. The company claims that this device is the world’s thinnest smartphone with a thickness of only 7.9mm. Also, this device weighs just 172 grams which is quite light. 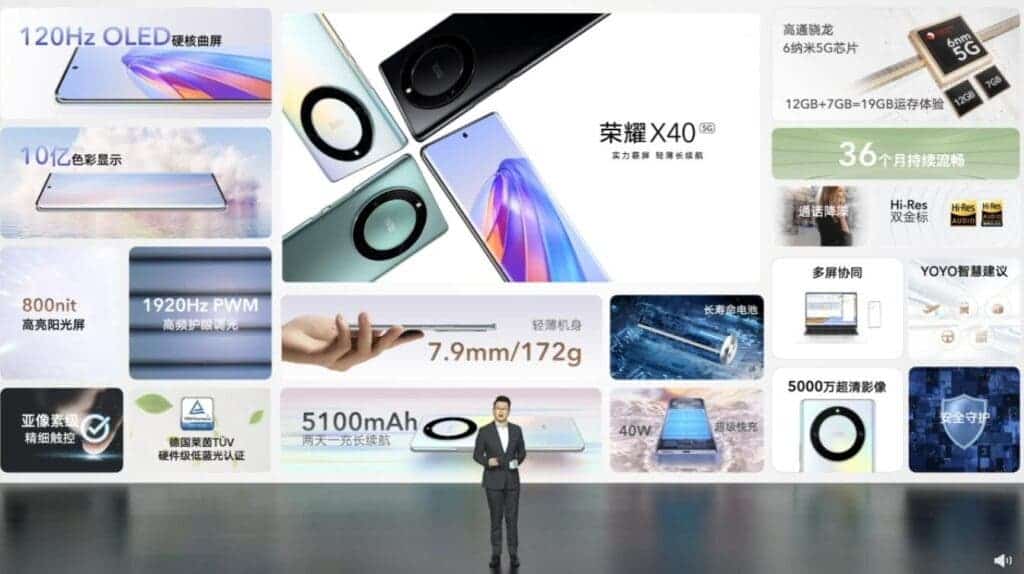 The Honor X40 comes with a 6.67-inch OLED curved screen with a 45-degree golden curvature. This device has an ultra-high screen ratio of 93%, which balances appearance, feel and reliability. In addition, the screen is made of 0.65mm secondary tempered glass, which is thicker than the industry standard. Furthermore, this display has passed 33 tests including a 1-meter-high drop test on a marble and cement floor.

The Honor X40 screen supports hardware-level low blue light and has passed the German Rheinland certification. The flagship-level 1920Hz PWM high-frequency dimming can reduce stroboscopic damage in dark light environments. This display brings the same level of light of some off-screen and under-screen fingerprints displays. It is worth noting that the Honor X40 supports AI to prevent accidental touches. Even if the hand accidentally touches the edge of the screen, the screen will not respond to this area. This significantly reduces accidental touches and misuse.

Despite its thin and light design, this smartphone also comes with a large 5100 mAh battery. This device also supports 40W fast charging and it gets a full charge in just over an hour. In terms of battery life, this device only needs a full charge once every two days. If you are an average user, the battery will last for over two days. The battery has a maximum capacity of more than 80% after 1,000 charge-discharge cycles. This means that the battery will still have an excellent battery life after three years of use.

In terms of core configuration, the Honor X40 comes with a Qualcomm Snapdragon 695 processor. This is a mid-range processor but the optimization gives it a top performance. In addition, this device also comes with up to 12GB of RAM and 256GB of internal storage. Furthermore, this device also supports the storage fusion technology. This technology allows the mobile phone to have more additional storage space through the principle of hard disk sharing. Thus, it obtains a smoother multi-opening capability.

According to Honor, the memory expansion technology can add up to 7GB to the RAM capacity. This means that this device can support up to 19GB of RAM. Officials say that the ageing rate of the Honor X40 after 36 months of use is only 1.3%. In addition, in terms of audio, it also brings many leap-level experiences such as high volume mode, dual MIC noise reduction, and Hi-Res dual gold certification.

In terms of industrial design, on top of the highly recognizable star ring design of the previous generation, the Honor X40 adopts the “full moon star ring” design for the first time. It is also available in four colours sky blue, amber green, light ornage and magic night black. At the same time, for the blank part of the full moon star ring, the designers of HONOR Talents also designed very interesting creative stickers. Users ca get these stickers at the Honor Experience Store and design their own unique star ring at will. The Honor X40 also supports the system-level security anti-fraud reminder function. It comes with functions of “notification guardian” and “long-time inactivity reminder” for the first time.

In the camera department, this mid-range smartphone comes with a pretty decent camera. On the rear, it boasts of a huge 50MP f/1.8, (wide) sensor that also supports PDAF. Also on the rear, this device comes with another 2 MP f/2.4, macro sensor. There is a dual rear camera setup on this device. Since the number of sensors on the rear do not translate to image quality, this device has everything a mid-range users will need. This smartphone also also supports LED flash, panorama and HDR. For videos, this sensor supports 1080p at 30fps.

For selfies, this device comes with an 8MP f/2.0 wide-angle camera. For videos, this sensor supports 1080p at 30fps. For a mid-range smartphone, the performance of the camera department is decent enough.

On the software end, this device comes with Magic UI 6.1 on top of Android 12 out of the box.

At thee launch event, the company revealed that the Honor X40 will enter pre-sales on multiple platforms such as Honor Jingdong flagship store. The starting price of this device is 1499 yuan which is about $214. 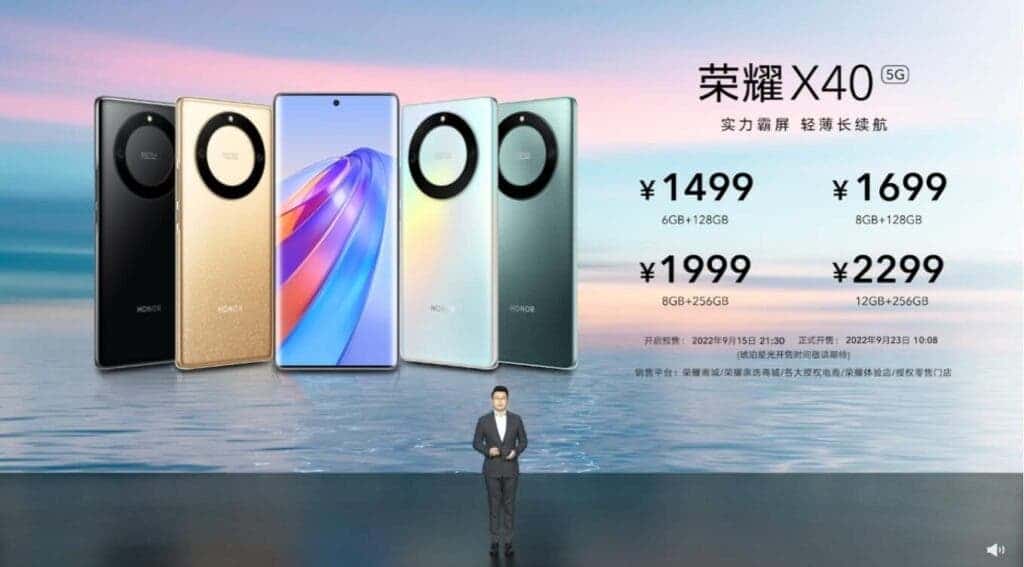 Furthermore, comparing with other products, the Honor X40 provides an OLED curved screen at this price. This is the only curved screen devices in the same range that sell for this price. For the other models, the prices are as follows

The pre-sale of this device will start at 21:30 tonight. However, the first official sale will be on September 23.

Next Lei Jun leaves the command of another Xiaomi subsidiary