There have been several reports regarding the iQOO 11 series over the past few weeks. According to an official teaser, the iQOO 11 series new product launch conference will hold at 14:30 on December 2. However, this mobile phone will not be alone at the press conference. The Chinese brand will also officially release the iQOO Neo 7 SE. At the moment, these mobile phones are on reservation on different platforms. Notably, they are on reservation on JD.com. After the launch event, both mobile phones will start pre-sales. The iQOO 11 series is a flagship series that will come with the latest hardware in the market. This series will adopt a new generation of performance. The most public hardware that the iQOO 11 series will use is the new Snapdragon 8 Gen 2 SoC. While this chip is nowhere near the A15 Bionic, it is the best-performing chip in the Android camp. In addition to this flagship chip, this device will also come with UFS 4.0 + LPDDR5X. At the same time, the whole series will also be equipped with the world’s first 2K 144Hz E6 full-sensing screen. 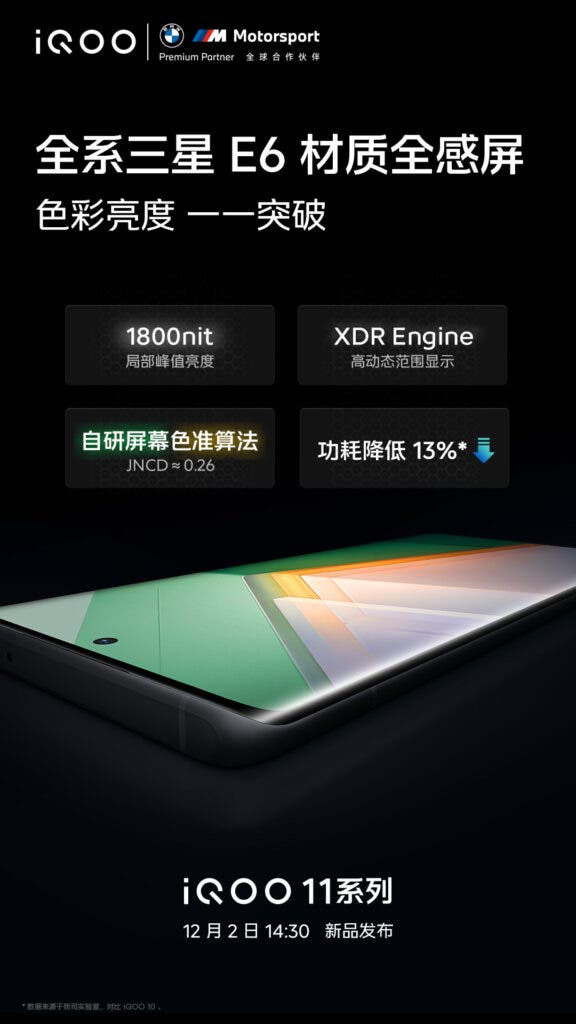 This new flagship series also upgrades other areas apart from the screen. The mobile phones will come with a 5000 mAh battery that supports up to 120W fast charge. This phone will probably get a full charge in less than 20 minutes. In the camera department, this device will come with a 50MP (GN5) F / 1.9 main camera. It will also have a 13MP 3L6 ultra-wide-angle lens as well as a 12MP IMX663 macro to complete the triple rear camera setup. On the front, the iQOO 11 will use a 16MP selfie shooter.

The chip will also be supplemented by Vivo V2 Self-developed chips. In terms of RAM and storage, this series will have a couple of options. It will have 8GB, 12GB and 16GB of RAM and 256 / 512GB of internal storage. The specific combination is as follows

At the moment, the iQOO Neo 7 SE is not getting much attention. This is because everybody is focused on the iQOO 11 series. However, the iQOO 11 will also launch on December 2nd and it will debut the Dimensity 8200 chip.

While we wait for the official launch of this device, there are leaks which have revealed almost all the specs of the series. According to recent information from @IshanAgarwal and 91mobiles, the iQOO 11 series will use a 6.78-inch E6 AMOLED screen that supports a 144Hz refresh rate. It is not very common to find regular mobile phones in the market that uses above 120Hz. No doubt, like other iQOO devices, this new flagship series will have gaming capacity.

A new official teaser of this series this morning calls the new series a “performance iron triangle”. While we don’t exactly know what the phrase implies, we are sure that iQOO is talking about performance upgrades. Perhaps, the company has upgraded the performance of this device in three major aspects thus the “iron triangle”.

Another tech blogger, @DCS claims that Vivo / iQOO will release the 1080p E5 flexible straight screen. The next two mid-range new phones will adopt this design, and the subsequent mid-range phones should be in 1.5. The iQOO 11 series will adopt the self-developed LTPO partition high-refresh technology. This can enable two refresh rates on one screen at the same time. Both the 60Hz and 120Hz refresh rates can be active on the same display at the same time. But it seems that it cannot be enabled in the highest 2K 144Hz mode.

While the iQOO 11 series will launch in China this year, the iQOO 11 Pro is expected in India by January next year. The iQOO 11 Pro will also feature a BMW M racing-inspired design and be powered by the Vivo V2 chip. This chip has been unveiled alongside the Vivo X90 series which arrived in China on November 22nd.

Next Moto X40 will support IP68 waterproof - to launch in December