Chinese brand, Xiaomi, will hold a launch event on December 1st where it will officially unveil the Xiaomi 13 series. This latest flagship from the company will also come with its latest Android skin, MIUI 14. Xiaomi’s founder and CEO, Lei Jun, recently reveals some of the core specs of this series. According to Lei Jun, Xiaomi places more emphasis on battery life than battery capacity. He adds that if the battery life is at a decent level, then he moves to the grip, thickness and width of the mobile phone. From the teasers so far, Xiaomi 13 series should come with a 4500mAh battery. Despite its decent batter, its grip, thickness and width remain at pretty low levels. Thus, it ensures a good battery life while adopting a sleek design. 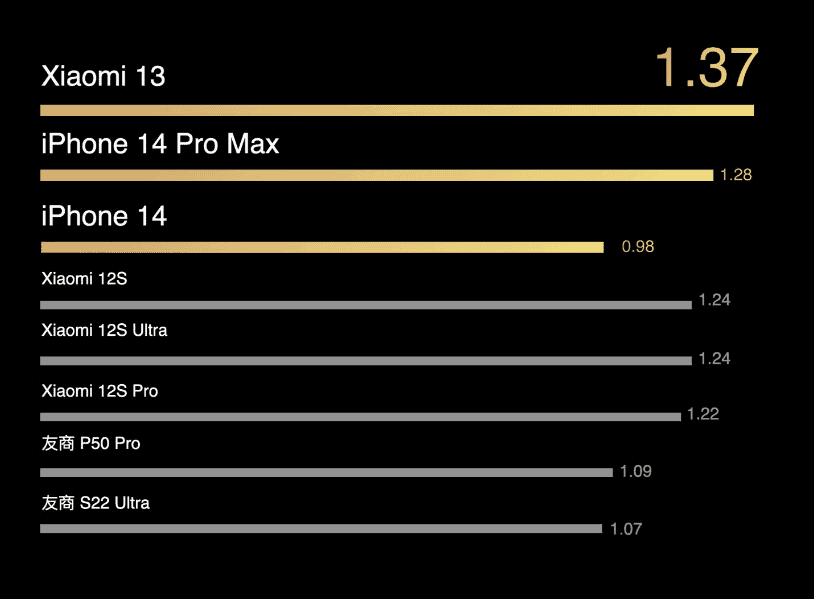 As a check for the battery life capacity, Lei Jun released the result of the Xiaomi 13 battery life test. In the result, figures more than 1 mean that the battery can work on average for a whole day. From the image below showing the test result, we can see that the Xiaomi 13 can work for just over a day. Its test value of 1.37 exceeds that of the iPhone 14 Pro Max which is 1.28. The iPhone 14 scores 0.98 which means that it can not work on average for a day. According to Lei Jun, his target is to see how the mobile phone battery can work for two days. He has been encouraging the Xiaomi R&D team to achieve this goal. Some official teasers from the company have revealed some features of the Xiaomi 13. This flagship device will come with a custom high-end OLED straight screen. However, the Pro version uses a hyperbolic screen but the visual of both displays is quadrilateral. The top and side bezels of the Xiaomi 13 are only 1.61mm. Only the bottom bezel is a little thicker measuring 1.81mm. With these thin bezels as well as the center punch-hole, the screen-to-body ratio of this device is 93.3%.

According to Lei Jun, the front of this device is slightly 2.5D while the rear has a four-curved surface. Although the width of the device is 71.5 mm, it is quite easy to hold. Furthermore, all the models in this series support IP68 as standard. This is the highest level of dustproof and waterproof standards.

While we wait for the official launch of the new “performance king”, we have several teasers which give us an idea of what to expect. According to Xiaomi’s CEO, the Xiaomi 13 series is a new gen. performance king. We already know that this series will come with some of the best hardware in the market. Under the hood, this flagship series will come with the second-gen. Qualcomm Snapdragon 8 Gen 2 SoC. In addition, it will also have the latest generation of LPDDR5X 8533Mbps memory and UFS 4.0 flash memory. When you combine the capacity of these three major components, the performance of the device gets over the roof. This is why Lei Jun considers the device a “performance king”. Lei Jun also believes that the second-generation Snapdragon 8 gen 2 is the most powerful chip in the history of Snapdragon. This is true but it is still not at the level of the Bionic A15 SoC. Nevertheless, this chip remains the best for Android brands. Also, this new flagship SoC brings the best energy efficiency in the last three generations. The CPU multi-core performance is 37% higher than that of the previous generation. The Geekbench 5 multi-core test result is comparable to that of the A16. Even the Adreno GPU performance is 25% stronger than A16.

When the Snapdragon 8 Gen 2 gets to the peak performance of the previous generation, it only needs about half the power consumption. This is another very important aspect of this chip. It effectively controls the temperature of the Xiaomi 13. In fact, its temperature control is well ahead of the iPhone during gaming. The frame rate is also more stable.

The Snapdragon 8 Gen 2 is the most powerful chip for Android mobile phones at the moment. It also controls energy or power consumption better than the last three Android flagships’ SoCs. This processor uses TSMC’s 4nm process and the CPU part adopts a 1 + 4 + 3 architecture. The brand-new X3 super-large core has a frequency of up to 3.19GHz. Its peak power and performance increased by 17%. The performance core adopts the A715 + A710 fusion architecture. Its frequency is increased to 2.8GHz, and the 64/32bit compatibility is retained. The small core A510 represents the background and battery life. The performance has been improved by 12%, and it adds 64/32bit compatibility. The combo between LPDDR5X 8533Mbps memory and UFS 4.0 flash memory gives this mobile phone a good standing. The memory bandwidth of Xiaomi 13 hits the level of desktop chips. These chips can better handle high data throughput apps such as continuous shooting and high-definition video recording. UFS 4.0 can bring a sequential read capability of up to 3.5GB/s. This is double that of the previous UFS 3.1. UFS 4.0 is also fully equipped with FBO storage refresh technology, which makes flash memory always smooth.