The enormous expansion of the iPhone in recent months raises the possibility that Android’s dominance in the smartphone market in the world may back off.

One in four mobile phones sold in China in October of this year were iPhones, according to CounterPoint‘s most recent research on the Chinese market. The iPhone 14 Pro Max was the best-selling model, followed by the smaller Pro version.

Due to all of these factors, Apple was able to increase its market share to 25% in October 2022. It’s the highest level ever for the Cupertino business. As a result, for the second month running, it is the top manufacturer in China. 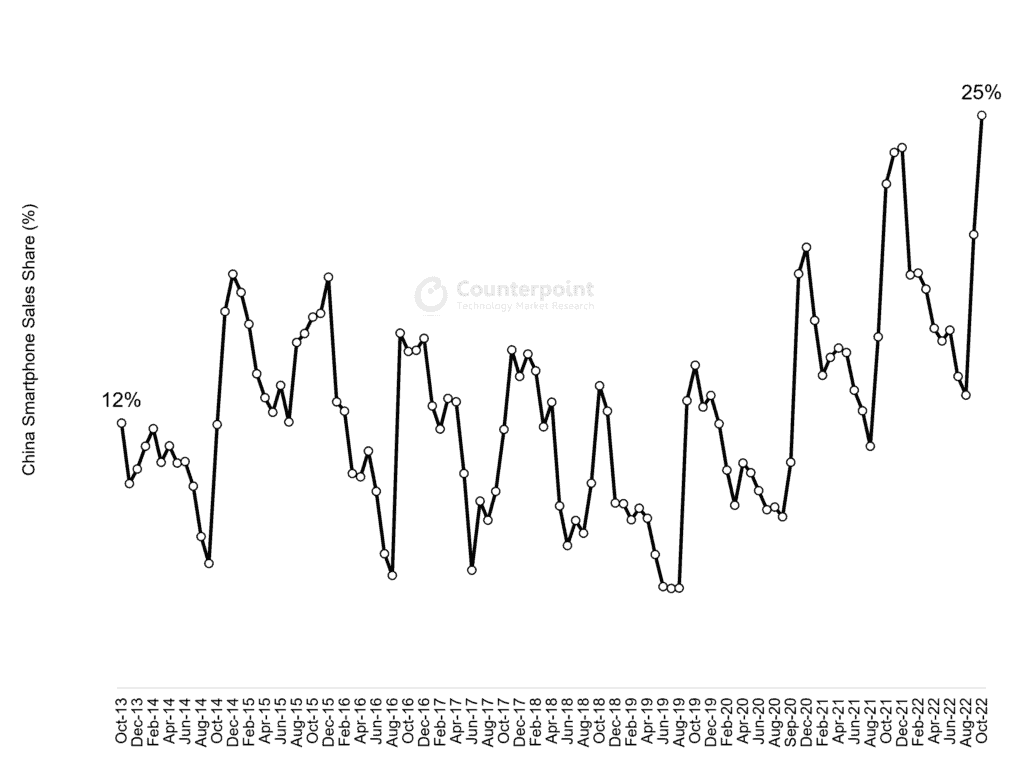 Sales of iPhones declined by only 4% in a month. While smartphone sales in China decreased by 15% from the same time last year. However, the company has been able to grow by 21% from the previous month. In order to take the top spot in the market.

The Chinese public’s enthusiastic response to the iPhone 14 series has contributed significantly to this rise. The 14 Pro Max and 14 Pro were the two best-selling iPhone models in October in China. Where it is believed that one out of every four phones sold was an iPhone. The iPhone 14 family has a share of 70% overall. Compared to 47% for the iPhone 13 series over the same time period the previous year.

Analysts claim that a number of reasons have contributed to Apple’s growth. Reaching its highest levels in the Chinese market to date. On the one hand, it is thought that one of the major winners from Huawei’s recent share loss in the Chinese market has been Apple. Additionally, it’s thought that in the premium market segment, more and more customers are choosing the iPhone over products from other well-known Chinese companies like Oppo, Vivo, Honor, or Xiaomi.

Apple is about to become the best-selling brand in China

Steve Jobs once called Android a thief! and Apple is still bitter