The Apptopia firm has released its list of the most downloaded mobile games and applications for the sixth year in a row. In this article, you can discover the top performers from the previous 12 months on iOS and Android.

The games and apps with the highest downloads during the year are compiled by the specialized analysis company Apptopia each year. We can find detailed information on the most popular apps by category from the many “top 10” lists. 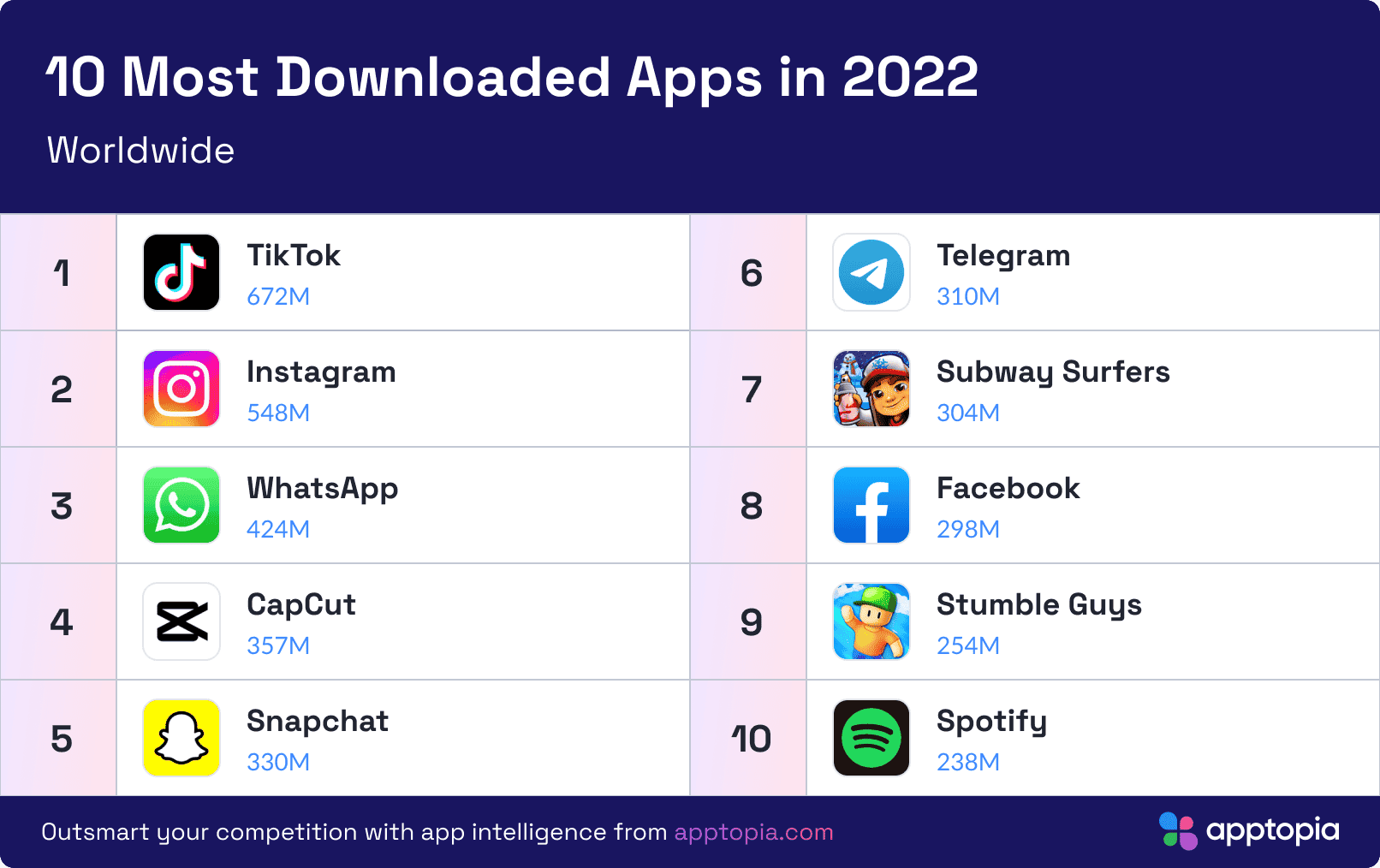 To establish this ranking, Apptopia counted the number of downloads between January 1, 2022 and December 20, 2022, on iOS and Android. The Chinese market is an exception taking into account only the data on iOS.

A download must be made by a distinct user in order to be counted. As a result, an application that has been uninstalled and subsequently reinstalled will not be taken into account. Additionally, downloads of the same apps won’t be counted more than once if the same login information is used on a new smartphone.

With 672 million new downloads in 2022, TikTok is the most downloaded application worldwide. Nothing new in that Bytedance’s application has topped the rankings for the past three years in a row. CapCut, another application from the business, rose to the fourth spot in the list. Its 357 million downloads are due to the fact that it is used to create videos that are subsequently posted on TikTok.

Meta, which places three of its services in the top 10 (Instagram, second with 548 million users, WhatsApp, third with 424 million, and Facebook, eighth with 298 million), is the other major winner in this global ranking. Three rival apps stand out: Snapchat (ranked fifth with 330 million users), Telegram (ranked sixth with 310 million users), and Spotify (10th with 238 million). Two games that are at the top of another rating are in positions 7 and 9, respectively.

The top games downloaded in 2022 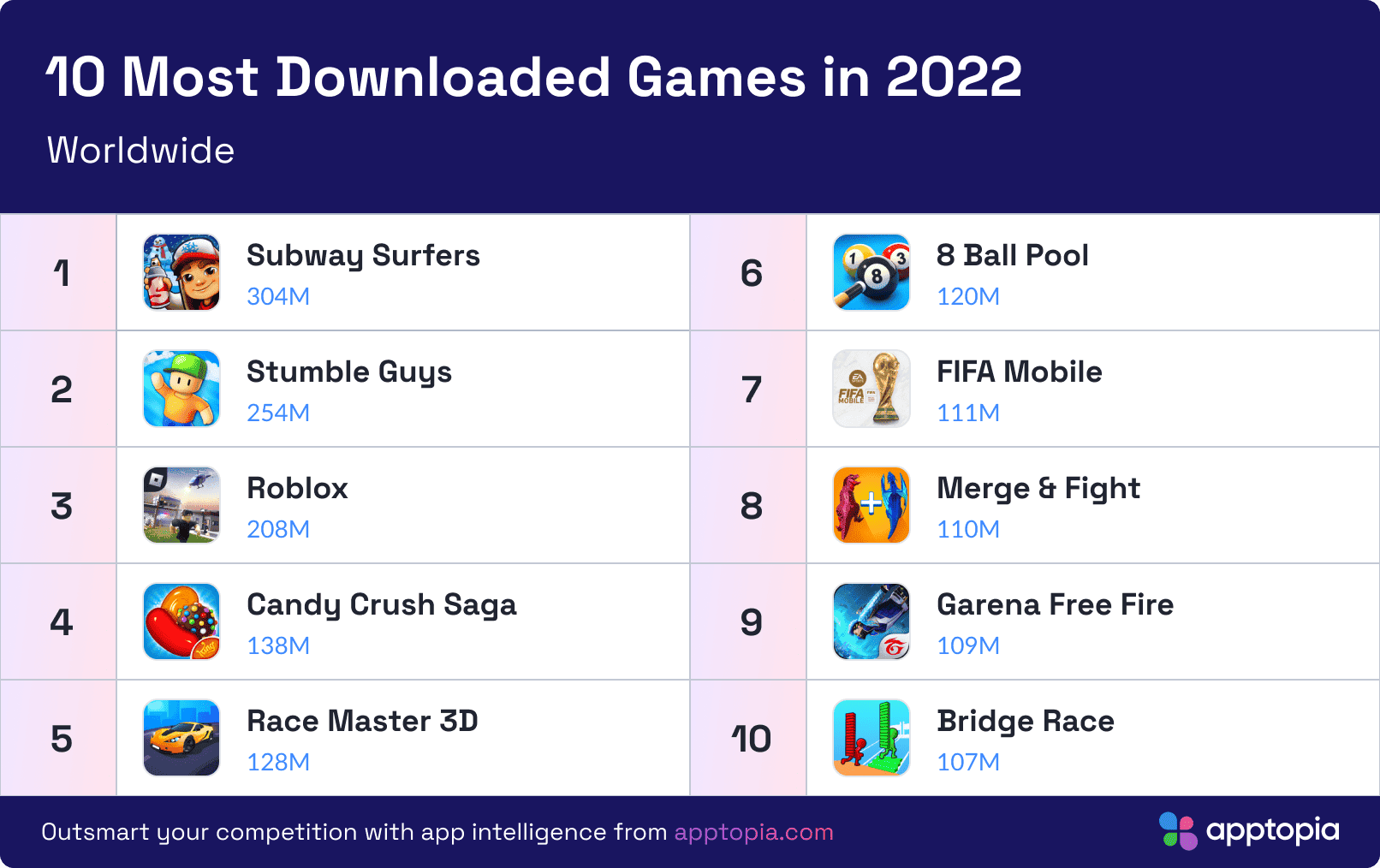 Apptopia provides a list of the top 10 mobile games downloaded globally in 2022. With 304 million downloads, the classic Subway Surfers takes the top spot. Not too bad for a game that just celebrated its tenth birthday. Stumble Guys, a multiplayer battle royale game that saw 254 million downloads in 2022, is located close by. Roblox, Candy Crush Saga, and Race Master 3D come after that.

Other top 10s are available on Apptopia, such as the top shopping applications in the globe in 2022. SHEIN first, closely followed by Meesho and Shoppe. Only fourth in the list is Amazon. For the first time in the history of this classification, we observe the logical lack of Wish.

It should come as no surprise that Google Maps, which has 113 million downloads, is ranked first among travel apps. Followed by Uber (107 million), Booking.com (80 million), and Airbnb (52 million).

The difference this year is that TikTok was officially considered as an entertainment app rather than a social networking app, unseating Netflix as the most popular entertainment app worldwide. The majority of the apps in this category are repeats from the previous year. Despite modest changes to the numbers and order.

We encourage you to browse all the Apptopia-classified data on their website for additional ranks. 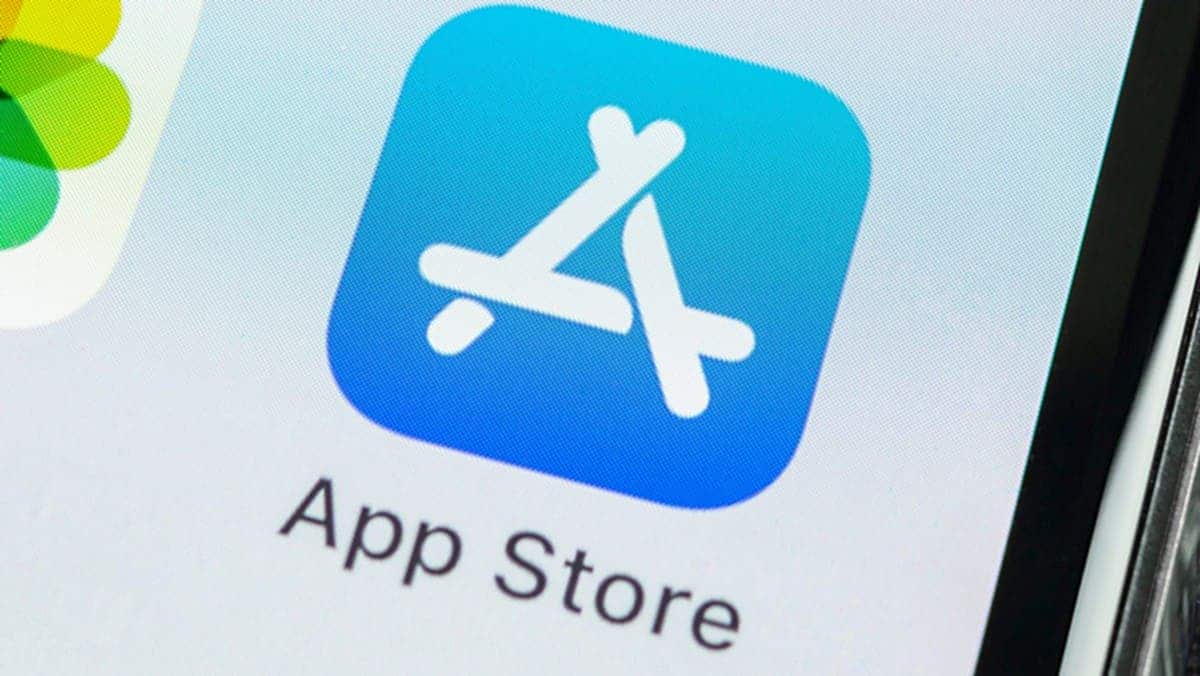 It’s hard to predict exactly which apps will be the most popular in 2023. As the technology and app market are constantly evolving. However, there are some trends and current popular apps that can give us an idea of what to expect.

One trend that is likely to continue is the growth of social media and messaging apps. Platforms like Facebook, Instagram, and WhatsApp have already established a large user base and are constantly updating and improving their features. We can expect these apps to continue to be popular in 2023. With new features and integrations being added to make them even more engaging for users.

Health and fitness apps will also be popular in 2023. With the ongoing focus on health and wellness, apps that help users track their fitness progress and make healthier lifestyle choices are likely to be in high demand.

In the business field, there will be a growing demand for productivity and collaboration apps that help teams work together effectively, even when they are not in the same location. These apps can include tools for video conferencing, project management, and document sharing.

In the entertainment industry, streaming services will continue to be popular. Services like Netflix, Disney+, and Amazon Prime Video will attract more users as they continue to produce original content and acquire rights to popular TV shows and movies.

In conclusion, it’s difficult to predict exactly which apps will be the most popular in 2023. But it’s likely that social media and messaging apps, mobile gaming, health and fitness apps, productivity and collaboration apps, and streaming services will continue to be popular among users. The app market is constantly changing. But by keeping an eye on these trends, we can get a sense of what to expect in 2023.

Previous Apple is preparing for a design change with the iPhone 16 Pro!