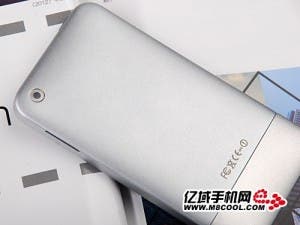 The latest in a vast array of Apple forgery is here and it’s taken shape as a sort of iPhone/iPad hybrid, at least on the style front.
From the front the 3.5 inch touch screen looks more or less like the 3Gs or any number of its clones. The screen looks rather crisp and the O.S has a very iOS feel.
From the back is where we get the biggest difference. An all alloy backside wraps around the sides and edges meeting the front glass screen and forming it’s shiny bezel. The only breaks in the alloy  are for the camera and side mounted controls, which are there to adjust the volume and lock the screen. There is also a head phone jack, and USB port, but no 30 pin dock connector, a replaceable battery is also missing from this clone as one is in the genuine iPhones.
The overall shape of the iPhone 4+ clone is more like a miniturised iPad with it’s rounded edges and tapered sides, rather than a straight out iPhone clone.
As the iPhone 4 + clone is still in it’s prototyping stages we unsure of what it’s running, when it will be released and how much it will cost, but rest assured as soon as we know we’ll post the details up.

You may want to subscribe to our feed here, to keep up to date.

Previous Apple Peel Could Mean $200 iPhone 4 Within a Year!