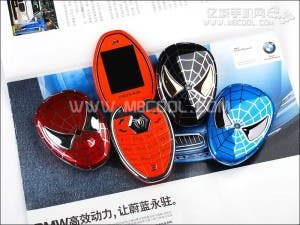 Last I heard the Spiderman franchise was dead, caput, no more! And after 3 rather long and boring movies featuring the weedy Toby Maguire as my/our favorite neighborhood Spiderman I’m rather glad. The fact that Sony are planning to reboot the series with a remake or rebeginning in the future worries me little, the only way is up and the only way they could ruin any future film is by giving Spidey one of these!
This locally developed and produced Spiderman clam shell phone looks to exactly mimic the head of the Marvel icon, the web pattern, face shape and eyes are all strikingly Spidey, although I’m not sure on the color options, red and black are fine (Spiderman and his alien foe Venom’s colors) the dark orange could pass as Carnage, but the blue? Unless Peter Parker’s been on vacation to Mushroom Land and had a few Ice Shrooms, I don’t think there ever was an entirely blue Spidey.
The handset features dual sim card slots, so you’ll be able to do a bit of conference calling to the boss as well as chat to your Mary Jane while web slinging, supports Mp3 audio, full screen playback of Mp4 and AVI video files on it’s 2 inch screen!!, micro SD card expansion, Fm radio, all your usual bells and whistles such as text, ebook reader, and of course the ability to make calls, plus a claimed HD camera! Perfect for capturing your crime fighting antics as either video or still’s.

Join GizChina on Telegram
No word on pricing but we guess they’ll sell in the region of 200-300 RMB complete with Spidey headphones, Spidey charger and Spidery spare battery.

Next ‘Chinese Bullet Trains Are Modern and Safe! So There!’