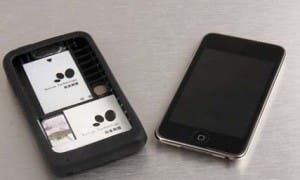 The iPod touch is basically a 2/3rd generation iPhone only thinner and lacking the camera, gps and phone capabilites. Although it has been possible for some time to run Skype of Fring on the iPod and make calls over WIFI, there has been no way to make calls or send messages over EDGE or 3G.
That is all about to change with the imminent release of the Apple Peel 520. Acting as basically a clip on phone adaptor the Apple Peel will turn any iPod Touch in to an iPhone for around $99.
Unfortunately the Peel only supports EDGE, although we’re sure a 3G model must be in the works, it does feature it’s own rechargeable battery giving around 3 hours of talk time a small motor to allow for ‘silent’ vibration alerts and obviously a sim card slot.
As this is obviously going against what Apple want you to do with the iPod your going to have to Jailbreak your Touch to get the Phone and SMS apps on there.
For around $99 the black or white Apple Peel is a steal, however we want to wait to see what Apple have planned for the iPod Touch 4. If it turns out to be an iPhone 4 without the 4 and the makers of the Apple Peel make an adapter we could be looking at $200 iPhone 4’s by the end of the year!!
More news as we get it, or you could subscribe here and let the RSS keep you up to date.

Previous Alibaba and Sohu Team Up and Take It To Google

Next Latest iPhone 4 Clone gets some iPad styling