SkyCool, a brand we were unfamiliar with until today have two new Windows running tablets ready for launch. These two are not your usual knock-off poor quality tablets either as Skycool hope to build a premium name for themselves and so have priced their tabs at similar prices to the iPad and the soon to be available Samsung Galaxy tab.
Both tablets run Windows on Atom processors and feature capacative touch screens. 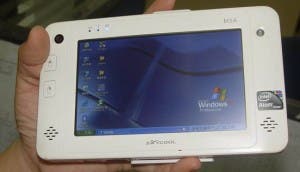 The cheaper of the 2 tablets is the M5A. The white plastic body houses a 5 inch touch screen, 16GB SSD hard-drive and 1Gb of DDR ram. The Atom CPU on the M5A is clocked at 1.2GHz which should provide more than enough poke to push the standard XP install around.
The weight of the M5A is an impressive 350g complete with a 1700mA battery pack. 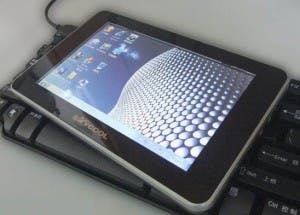 The second more iPad like device, the M7 gets a few internal upgrades over the M5A such as a faster 1.6Ghz Atom Z530 CPU, 2Gb of DDR RAM and a larger 2700mA battery. That big battery doesn’t necessarily translate in to better battery performance though, as it has to power a faster CPU and a larger 7 inch screen. The O.S looks to be Windows 7, which should be a little better to use than XP due to it’s built in on screen keyboard.
Weight is still pretty low at only 550g around 120g lighter than the WIFI iPad.

As mentioned above SkyCool are after a more premium looking market share so the tablets are priced to reflect.
The M5A will cost around 3699 Yuan ($540) where as the much prettier and M7 will retail at 4299 Yuan ($635).

Next Phone Clone of the Week: Lcnevo 'Moon Cake' Edition