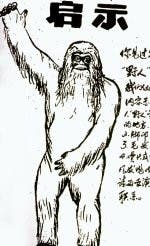 More spooky news from China as part of our Halloween week. China doesn’t just have UFO’s and Ghosts but also yeti’s!
It might be a surprise to most of you that China takes the idea of a wild man living in the forests of Hubei very serious, and has to date launched 3 official expeditions to find evidence of the Yeren. Those expeditions were conducted in the late 70’s and early 80’s and didn’t find any conclusive evidence for the mythical beast, although they did find footprints of something, some very odd hair samples and what the scientist guest were nesting area’s.
The desire to find proof of the Chinese wild man hasn’t faltered in the past 30 years and now the Hubei Wild Man Research Association (HWMRA) are planning a Yeti hunt next year.
The Chinese call their Yeti the Yeren (wild man) and it is believed that this wild man is a relative of the North American Bigfoot measuring 7 feet tall with grey, red or black hair covering it’s entire body.
Early reports of the Yeren claimed a hairy female would enter villages at night and have her way with the local men before disappearing in to the forest. There are also reports of the hairy humanoid making off with crates of beer!
If you fancy a bit of Yeren spotting you might be interested to know the HWMRA are looking for volunteers to take part in their upcoming expedition. You must be healthy, outdoors kind of person, have a knowledge of biology and able to use a camera. Or if you happen to have a couple of $ million in the bank you could offer to finance the whole thing as they are currently looking for backers.

Next Apple To Be Sued For 10 Billion Yuan Over iPad Trademark?