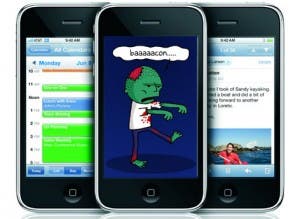 Admit it or not but some of you out there have secretly hoped for a Zombie apocalypse. Maybe you just fancy a break from the normal daily routine, or perhaps the idea of living in constant fear floats your boat, or perhaps you just want the chance at hacking your bosses head off! Whatever their reasons some people have at least fantasized about the idea.
But did you know that a ‘Zombie’ virus is currently running rampant and had claimed 1 million victims in the first week of September alone?
In the first week of September this year 1 million cell phones were infected by what experts are calling an aggressive ‘Zombie’ like software virus.

According to CCTV where complaints were made over higher than expected phone bills, the malware is often accidentally downloaded attached to legitimate applications. Once installed on the phone it lies dormant until mid-night at which time it sends SMS messages to any contact on your SIM card. The messages recommend games with download links, if someone receiving the message clicks a link the virus infects that phone and the process starts again.
A phone with the ‘Zombie’ virus won’t only be a carrier, but will also incur high phone charges due to the number of messages sent plus the bandwidth used to download the infected software.
Experts monitoring the virus claim that a distributor purposely infecting their applications stand to make 10 times more profit and 1 million infected phones could cost users more than 2 million yuan ($300,000) every day!
More than 1600 different virus which attack mobile devices were detected in the first half of this year, a number which is expected to increase with the growing number of phone users.

Previous Apple Peel 520 Gets 3G Update Headed To The U.S On Sprint