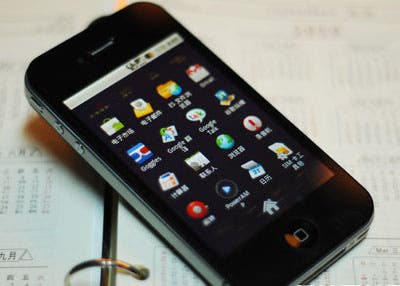 If I were to tell you of a place on Earth where Apple and Google co-exist in the same product you may well look at me doubtfully. If I then continued on and told you of a device which benefited from Apple’s aesthetically pleasing designs and Google’s open source mobile platform, Android, you would probably either check to see if I had been drinking or diagnose me as crazy.
But, if I then mentioned the name of this magical place you would smile and nod knowingly.

That’s right! Our friends down in Shenzhen have put together two of the most popular mobile products and created an iPhone 4/Android hybrid/clone.
On the front we get a 3.5 inch capacitive touch screen covered in a sheet of protective tempered glass plus a front facing VGA camera for video calls. 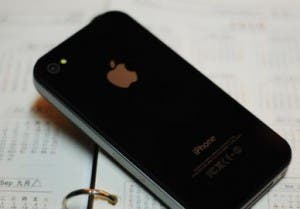 The back gets the same toughened glass treatment as the front, along with camera, LED flash and Apple branding.

On the edges we find volume controls in the same places as on the genuine iPhone as well as a micro SIM card slot and 30 pin dock connector.
The external appearance of the phone does such a good job of mimicking the real iPhone 4 that you would need to take a second glance and give it thorough going over to see what it actually is.
Or, of course you could just press the home button which will give the charade up in no time. One click of the home button brings up that now famous Android lock screen.
Android 2.1 is the version of the Google O.S pre-installed which, judging by the video below, seems to work quite happily on the 416Mhz CPU and 256Mb of ram.
Other nice feature are GPS, 3G, WIFI and a micro SD card reader hidden under the removable rear glass panel.
The model shown here is still a pre production model, but judging by the quality of the appearance and function of the O.S expect to see this knock off on shelves in time for Christmas.