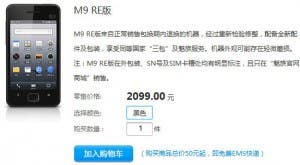 Back in the days when the Meizu M8 was top dog at and the Android M9 was merely a twinkle in Jack Wong’s eye, the rather generous CEO startled Meizu fans by telling them that once the M9 was released they could trade in their old M8 for an 800 Yuan discount on the new phone.

However Meizu fans have been a little disappointed with the lack of official word on the trade in scheme since the Meizu M9 has been available for 5 months now.

Last night though Jack Wong made the announcement on the Meizu Forums that the M8 trade in will finally kick off with the start date being May 10th. Meizu M8 owners will be able to trade in the old M8 for up to an 800 Yuan ($122) rebate on a new Meizu M9.

Also announced by not included in the M8 trade in scheme is the news that Meizu is now selling refurbished M9 Android phones at a reduced price of only 2099 Yuan ($322) which is a 600 Yuan saving over the new M9.
The refurbished M9 will get new charger and data cable, but packaging and the phone themselves may have a little wear and tear.

And finally JW made it known that once all Meizu owners are on the Android platform he will not be offering a trade in scheme again, so those of you hoping to trade your M9’s in for the Meizu MX when it launches later this year are out of luck.