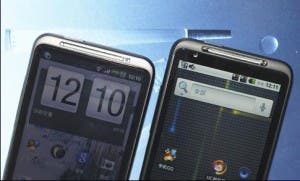 Oh we do love a good clone here at Gizchina and this HTC Desire knock-off is one of the best we have seen in a while, well if you don’t include the Gooapple Android iPhone 4 clone that is.

The Shenzhen pretender gets a xeroxed external appearance and UI running Android 2.2.

A 4.3 inch capacitive touch screen sprawls across the front of the Desire-a-like and has a resolution of 800 x 480 while the rear get’s a nicely speced 5 mega-pixel camera.

As always with Android phones, fake or not, there is also support for GPS, Wi-Fi and also accelerometers for game play.

In all honesty we aren’t HTC fans, meaning this clone would quite easily fool and in all honesty we imagine even a current Desire owner would have trouble distinguishing this clever copycat from the real thing!

Next Chinese iPhone 5 Suppliers Preparing For May!