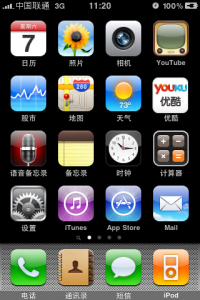 The iPhone 4 and iPad 2 are officially astronomical hits in China. The year has been filled with headlines of iPhone 4 sell outs, iPad smuggling and more recently iPad 2 sell outs, but there is one thing that has always bugged us about iOS devices in China, and thats the Youtube app.

As you are probably aware Youtube is inaccessible in China and it with Google’s attitude toward China’s Internet rules, it looks as thought it will continue that way for the near future.

So what about that preinstalled Youtube app? It’s pretty much useless in China right? Right! And that’s what Youku are rumored to think to!

Whisperings around the web are that Apple and Youku are currently in talks to bring the Youku application to the iPhones, iPads and iPods as the official default application for iOS devices sold in China!

With Apple making China it’s top priority in regards to sales it would be of little surprise if we didn’t see more native Chinese applications finding their way on to the default home screen of the next iPhone and iDevices to come.