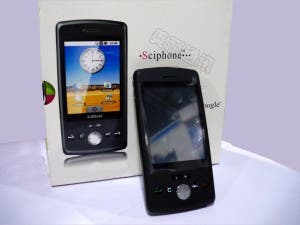 I love my iPhone, but I have to say the premium attached to the device is a bit of a financial burden. Even old generation 1 iPhones still fetch upwards of 2000RMB ($292) second-hand! Thank goodness for Android! An operating system that rivals the iPhone’s and is open to everyone. The open nature of Android was bound to stamp down phone costs.

Even with this in mind, the retail price of Sciphone’s G2 still manages to surprise me in a comedy double take, wallet whipping out and impulse buying kind of way!

Like most smart-phones in today’s market the Sciphone G2 is packed with all the features we’ve come to expect, GPS, WIFI, 3G and some nice bonuses such as the micro SD expansion port with 16Gb micro SD support. Your usual mp3/mp4 playback capabilities are there, along with a camera which allows for both still and video to be shot.

Sciphone offer the G2 in Windows mobile or Android flavors, both of which make use of the 2.8inch capacitive screen with optional stylus for navigation.

So the G2 is your standard smart-phone with all the usual suspects on the spec sheet, so why did we bother to post it? Quite simply because it could be the Android bargain of the month! At a wife noddingly attractive 440RMB ($64)! including a spare battery and a cute green Android mascot, it becomes increasingly difficult to think of reasons not to buy one!

Want more info on this, or other posts on the site? Leave a comment or send us an email:

Previous Shanghai Expo to Use Food Scraps for Power