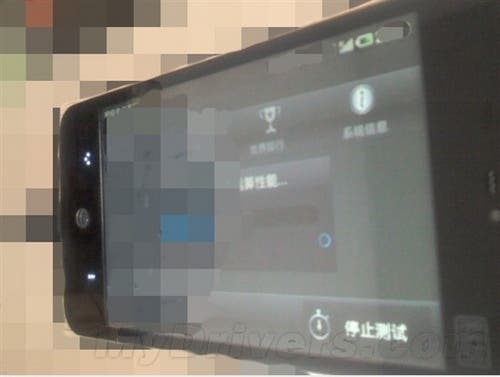 We are at least a month away from the planned launch of the Meizu MX and just in time to build hype more and more ‘leaked’ details of the latest Meizu phone are appearing on the web.

The photos shown here are claimed to be of the Meizu MX’s new screen and also show a new ‘home’ button along with slightly altered navigation buttons.

The photos were originally posted on the Meizu forum but later deleted adding to the mystic of the supposed leak.

Those of you familiar with Blackberry phones might see a similarity between the older navigation ball found on previous Blackberry handsets and the home button shown here on the Meizu MX leak, however if this is the case it would seem strange to use such a physical navigation button when the MX has a perfectly good 4-inch touch screen.

Jack Wong is sticking to his December launch plan when two models of the MX are supposed to ship. The 16GB dual core model will retail at 2999 Yuan while the 32GB quad-core version will go on sale for 3999 Yuan.

Meizu MX and M9 Both Getting Ice-cream Sandwich

Along with the leaks above, JW has also announced that Android 4.0 Ice-cream Sandwich will be available for both the new Meizu MX and the current Meizu M9 as soon as possible. Let’s just hope that Android 4.0 will finally bring some stability to the M9 which seems to have been running a Beta OS since launch!

Next Lenovo's 5-incher Caught on Camera!