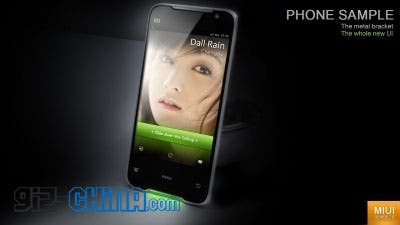 The Xiaomi M1 has taken China by storm, and if our guesses are correct, the soon to be China’s first Android Ice-cream Sandwich smartphone, will also be doing the rounds internationally.

So now while the Xiaomi M1 is flaunting it’s 4-inch screen, dual-core 1.5ghz CPU and 1GB ram in the spotlight, what better time than for the Xiaomi M2 rumors to begin! Update: Next Generation Xiaomi Name Leaked on Twitter!

We had heard rumblings earlier this month about the possibility of a next generation Xiaomi phone were underway, but now we have a little evidence to back it up.

The concept image below is rumored to be of the next generation Xiaomi Android phone which everyone is expecting to be named the M2. Update: Next Generation Xiaomi Name Leaked on Twitter!

The image doesn’t really give us much to go on other than the body has been given a style tweak as has the MIUI Android user interface, however we have also come across some rather impressive specifications which are meant to adorn the M2 once released.

Now take these rumored Xiaomi M2 specifications with a pinch of salt, but according to rumors floating about on the Chinese internet the M2 will have the following:

If these specifications turn out to be true the new Xiaomi M2 Android phone will be running a better set of hardware than current tablets, and the majority of lower priced laptops/ultrabooks on the market!

Only time will tell as to what the next generation Xiaomi M2 phone will be like, but remember where you heard these rumors first!