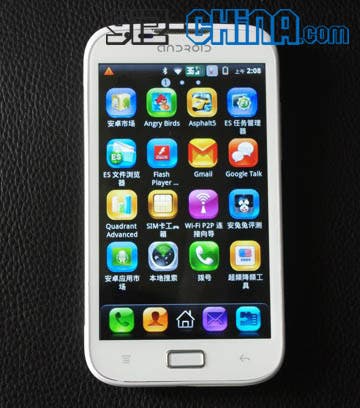 While some thought that 5 inch Android smartphones were a little too big and nothing more than a passing trend, Chinese manufacturers have embraced the larger size and are aiming to capitalize on the market. The latest offering being this very attractive 5 inch Android 4.0 model!

This 5 inch screened Android 4.0 ICS smart phone from China is currently on the market for the low low price of only $190 which makes it much cheaper than similar 5 inch phones form LG, Lenovo and Samsung.

In true Chinese Android phone nature, this white 800 x 480 resolution model uses styling cues from well known popular smartphones such as the Samsung Galaxy Note and HTC phones and even goes as far as having the Monster Beats logo on the back of the white body.

Specification wise the very attractive looking phone houses a MTK 6575 1Ghz CPU with Cortex A9 core. This newer chip has a faster clock speed over previous models and supports 3G and has a built in GPS.

Also built in is Bluetooth, Wifi, a TV tuner and an FM radio.

Dual camera are also on tap to capture the action with the rear, HTC inspired camera arrangement also boasting an LED flash.


For more information on this 5 inch Android 4.0 phone please contact us.

Next GooApple Releases GooPad Knock off iPad 3 with fake iOS