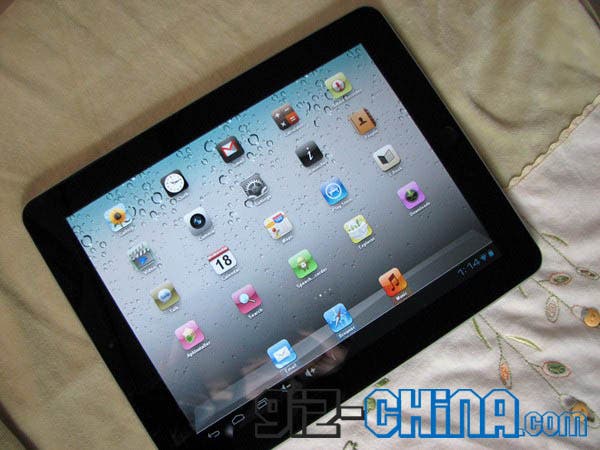 GooApple, the Chinese company behind the fantastic GooApple V5 iPhone 4S knock off and various iPhone 4 clones has entered the Android tablet market with the new GooPad Android New iPad knock off complete with knock off iOS!

Like the genuine new iPad the GooPad has a screen size of 9.7 inch but with the same 1024 X 769 resolution as the iPad 2 rather than the retina display the new iPad 3 boasts.

Under the very genuine looking New iPad exterior hides a 1Ghz RockChip CPU and GC800 GPU plus 1GB RAM. While the RAM might be more than generous the 1GHZ CPU and GPU are the same units found in a number of low cost Chinese Android tablets. While performance is solid don’t expect to be blown away!

16GB of built in memory is built in for you to load up on games, apps and movies while the Android 4.0 ICS OS will keep this knock off iPad 3 up to date for some time to come.

Speaking of the OS, GooApple have done their usual trick of applying a very real looking iOS skin to the Android Ice-Cream Sandwich OS, you would really have to look closely and know you are using a knock off iPad to tell the difference!

Like the real iPad 3 this GooPad is a little thicker than the previous iPad 2, in this case the thickness is 11.5 mm and there is also a little extra weight to the GooPad to as it weighs in a 685g GooPad has slim body, but 11.5mm is thicker than iPad, and weight 685g (the new iPad 2 is 652g).

However, that extra girth and weight does go to good use as the GooPad Android iPad 3 knock off has a microSD card slot, built in HDMI our, mini USB port and a 3.5mm headphone jack.

Front and rear cameras are also included with the front video chat camera being a 0.3 mega pixel unit while the rear is the same great 5 mega-pixel unit found in the GooApple V5 iPhone 4S clone!

For more information and details about the GooApple GooPad Android ICS tablet contact us now!