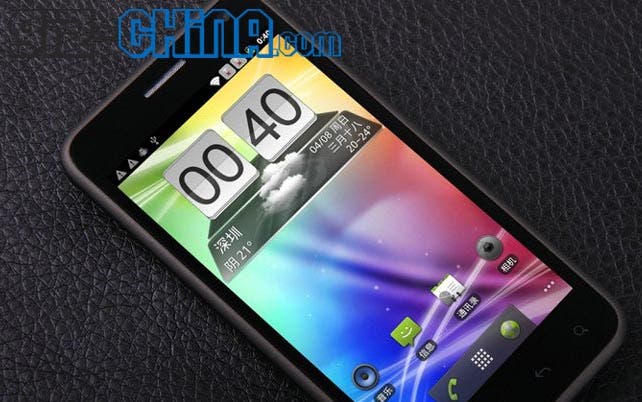 The HTC One is an awesome phone, even us as avid Apple and iPhone users have to admit that the HTC One’s hardware is super impressive, so it comes as no surprise that local Chinese manufacturers are cloning the flagship HTC phone.

This is actually the second HTC One knock off which we have come across, and just like the first, this model looks very realistic and even features and impressive feature line up.

Marketed as the One 4G + this 4.3 inch screened Android smartphone isn’t actually compatible with any 4G network but instead uses 3G HSPA and Wifi for it’s data connection.

A 1GHZ CPU from Meidiatek (MT6575) is based on the Cortex A9 Architecture which runs the latest Android Ice-cream Sandwich 4.0 OS without hicough or headache.

Sharp supply the 4.3 inch touch screen which boasts an impressive 960 × 540 resolution (256pp) which really gives the photos taken with the rear auto focus 8 mega-pixel camera a bright and realistic look.

Prices haven’t been announced yet but expect to pay around the 2000 Yuan mark once launched.

Next Top China Travel Apps For iPhone And Android