Do you remember the first time you saw someone with a Samsung Galaxy note and you were like “OMG look at the size of that thing!” We’ll imagine something even bigger that dwarfs every 5 inch phone out there and you have Jajapad 6inch Jelly Bean Android phone! The closest you can get to a Jelly Bean Galaxy Note but bigger!

As you can see below the Jajapad is a monstrous device which looks like it could easily swallow an iPhone 4S and a Galaxy Note or a Zopo Zp900 and a Xiaomi M1s!

It’s so big I have to say that it is actually comically huge! But other than a 6 inch screen, what has Jajapad the Chinese phone company behind this creation stuffed inside this roomy chassis?

Well there’s a huge battery for starters! 3000mAh! that’s double that of the rumored iPhone 5 battery which has been all over the news today, then there is everyone’s current favourite CPU the MTK MT6577 dual-core unit clocked at a leisurely 1.2ghz along with  512MB RAM, 4GB ROM, 3G, Wi-Fi and GPS which make up the rest of the innards.

Due to the large 6 inch screen we expect some pretty fine cameras and the Jajapad has a mighty fine 8 mega-pixel rear camera coupled with a not so awesome 0.3 mega-pixel up front. 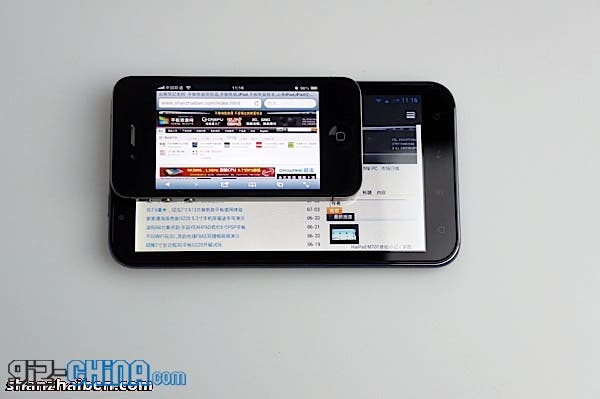 So you have this huge 6 inch screen and a whopping 3000mAh battery what OS does it have splayed across its vast surface? Well none other than Android 4.1 Jelly Bean! Which could make the Jajapad the worlds largest Android Jelly Bean phone currently available!

There are a few unanswered questions however, such as the price for this 6 inch Jelly Bean phone, but more importantly what is the resolution of that mammoth screen?