Last night we posted photos of the Xiaomi M2’s design along with a rumour that the Chinese phone company could be launching a new updated dual-core model today we have leaked confirmation of the Xiaomi MOne s!

While it could be likely that Xiaomi will keep the current phones on sale as low cost options, these latest leaks along with this report suggest that both the M1 and M1 youth are going to be replaced with updated faster units.

The M1 will likely be replaced with the quad-core Xiaomi M2 which we have reported on a lot with the most recent details being it’s leaked design, benchmarks and specification, while the M1 ‘Youth’ looks set to be replaced by a faster phone called the M1S. 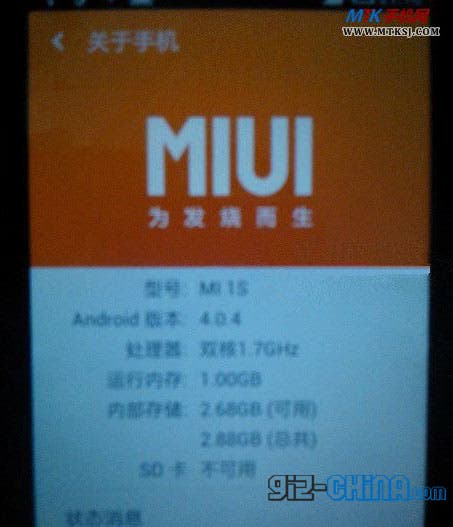 As the name would suggest the MOne S is going to be an updated and faster (S for speed) version of the current M1 and could still be priced at the magic 1999 Yuan ($315) price point.

The MOne S is currently alive and well as a prototype named “P3-110” which boasts a front camera like the quad-core M2 but with a dual-core 1.7ghz CPU which (the current M1 is 1.5Ghz dual core)

We don’t have much else to tell you at the moment except the MOne S (M1s?) will run Android 4.0.4 ICS but will likely get Jelly Bean once a new verison of MIUI is released.

Next JiaYu G3 release date delayed due to 'optimization'