Remember a few months ago when we posted the amazing news that Chinese E-commerce site Beidou had two high performance dual-core and quad-core phones ready to enter the market named the ‘Little Pepper’? Well we finally have some news about these “to good to be true” Chinese phones !

Finally, after doing a bit of digging I have found out that you can buy both the quad-core Little Pepper with its Tegra 3 CPU for 999 Yuan and dual-core MT6577 Little Pepper for 699 Yuan right now!…. As long as you are buying them as a OEM phone and can meet the factories minimum order quantities!

It seems that Beidou decided to kick up a bit a excitement for their new OEM product to the point that the low-cost dual-core and quad-core Little Peppers managed to go viral across China and, to a certain extent, around the globe! 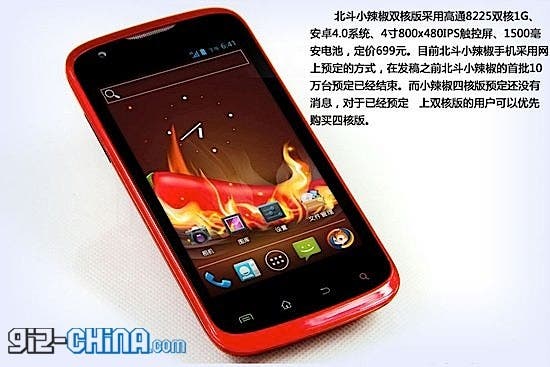 However, it now looks as though Beidou never had any intention to release the Little Pepper phones direct to the public and are in fact looking for OEM customers who will be able to buy these phones at the advertised prices and then add their mark-up!

Regardless of why, how and what I’m suitably disappointed with their deceptive marketing and can only imagine that their false advertising has done more harm than good for them, as now phone from the likes of JiaYu, Newman and Amoi are on the market (or soon will) at prices not much more than the Little Pepper’s OEM cost!

Well at least we finally have news about the Little Pepper phones, it’s just a shame it’s not good news!