The 5.8 and 6 inch phablet market is thriving in China with more and more companies jumping on board the super huge phone/mini tablet bandwagon. The latest Chinese phone brand to launch a 5.8 inch phablet is VSun with the VSun i1. Details and benchmarks below.

Unlike other Chinese Phablet makers VSun have gone for a slightly smaller 5.8 inch display for the VSun i1. While the screen size is smaller than other phablets on the market the VSun i1 has the same (poor) resolution as other similar units at only 800 x 480 but manages to offer good performance. 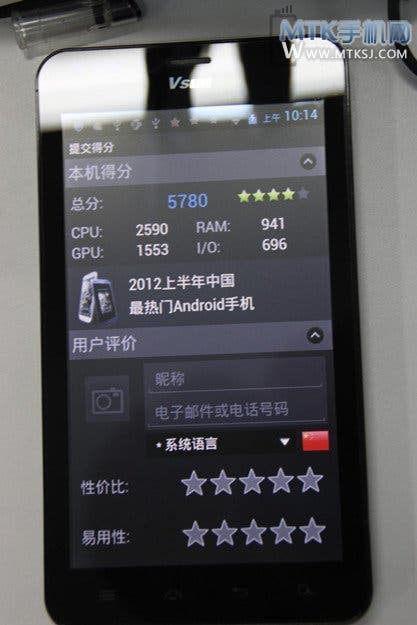 The VSun  i1 has a dual-core MT6577 CPU clocked at 1GHz with options of either 1GB or 512Mb RAM, with the 1GB version managing to reach a respectable AnTuTu benchmark score of 5780.

Both versions of the VSun i1 have front and rear cameras with the rear being an 8 mega-pixel unit which is capable of capturing 720p video.

VSun have announced that both version of their phablet will be on sale from the 26th October with the 512mb model being priced at 880 Yuan and the 1GB model costing slightly more at 980 Yuan.

Next Another HTC One X clone the HDC X One ++