Judging by the number of rumours, spy photos and even recently released phones. It looks like 2013 is going to be the year of 5-inch quad-core phones, and Chinese brands such as TCL will be at the forefront!

We’ve already seen the launch of the Oppo Find 5, HTC Butterfly, and heard the rumours about ZTE’s Nubia and the UMi X2, but it looks like every Chinese phone manufacturer will have a quad-core 5-inch phone on the market at some point next year.

TCL could be one of the first too with their MT6589 equipped TCL Y900 which we can see here in these pre ported leaked photos.

TCL have yet to confirm the authenticity of the photos, but sources close to the company claim the Y900 will come with the latest MediaTek MT6589 CPU, 5-inch IPS screen, 13 mega-pixel rear camera and Android 4.1 Jelly Bean. 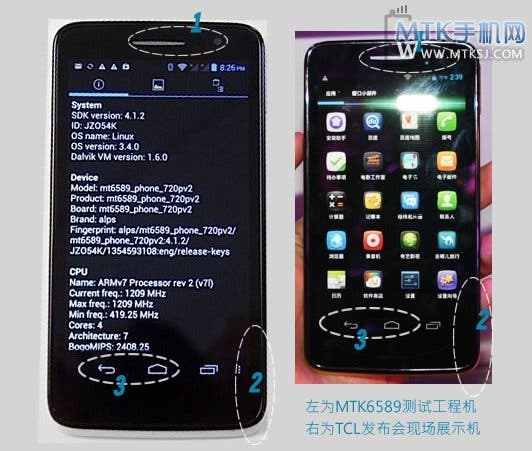 Further reports suggest that their will be two versions of the quad-core Y900 available with a low-cost model getting a 720p screen and 8 mega-pixel camera.

Next Huawei about to take phablets too far with an 8.5-inch model on the way?