It’s been a trying few months for developers of quad-core MT6589 phone, their handwork is paying off now though as quad-core Chinese phones with 2GB RAM are now arriving on the market with the first being the Big Cola 2.

The Big Cola 2 (aka Da Kele) officially launched yesterday, and has already been scooped up by reviewers here in China and is being placed on pre-order soon. 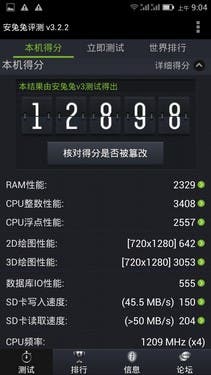 There is one concern, and it’s something which has cropped up with other MT6589 phones running 2GB RAM and that’s the performance based on Antutu benchmarks. Although the Big Cola 2 has double the RAM of the Hero 7500+, Zopo 810 and Jiayu G4 Youth, the Antutu score isn’t all that impressive at 12,898. In comparison the Hero H7500+ with the same CPU and just 1GB RAM scores 12,745, is cheaper and has been on sale for months already!

For international buyers the Big Kola 2 could be a great alternative to more mainstream Chinese phones, the brand has less of a following and could get less demand meaning lower reseller pricing!

With the 2GB Big Cola launched, the 2GB UMi X2 on preorder and the P7 mini Pad coming soon we can only keep our fingers crossed that JiaYu, Neo and others won’t be to far behind.