Meizu’s Jack Wong has been running the hype machine for the companies upcoming Meizu MX3 this week with hints that the new phone could be powered by Samsung’s powerful Exyno 5410 Octa SoC.

Meizu and Samsung have a long history of working together on Android phones. The Meizu M9, the first Android phone from the company, used a single core Samsung chip and even shared a similar PCB layout to the early Galaxy phones. The cooperation continued through the dual-core and quad-core Meizu MX and is still going strong with the MX2, but what for the MX3?

Some reports have suggested that Meizu won’t be using Samsung’s latest Exynos 5410 Octa due to licensing issues, however a recent post on the official Meizu Weibo seems to tell a different story. The post tells how the current Snapdragon CPU, in their opinion, isn’t as energy conscious as the 5410 Octa, and that the 8-core chip is the perfect SoC. 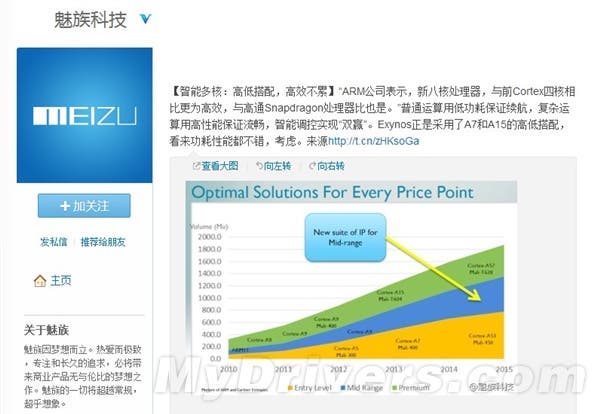 Surely this is a hint that the Samsung Exynos 5410 Octa, with the big small energy saving technology will be in place in the MX3 right? Well that’s how Chinese tech sites are reading the news anyway! Also in the MX3 rumour mill is that the phone will feature a 1080 HD display measuring between 5 and 5.4-inch, 2GB RAM, 13 mega-pixel rear camera and Flyme 3.0 (boo).