So I finally made the step and got down to purchasing my first ever Chinese built mobile phone. There was a lot of decision making that went into the process, things like processors, understanding the MediaTek processors, their limitations, the MTK6589 and its Cortex A7 Architecture. I wanted a phone that would of course be able to match up to today’s modern smartphones, while maybe not in the benchmark sense, but in the user experience sector. More importantly, it had to be somewhat better than my current device, the Galaxy Note 2.

In the end, I settled with the Zopo ZP980 Ultimate Edition, and so I looked online for ways to get the device. While, I contemplated getting it off websites I already know, and that are published all the time in GizChina, in the end, I went for something I already knew and had experience with, AliExpress, and got my phone shipped for 330 USD including DHL express shipping which meant that the phone arrived in 4 days to Malaysia. Pretty good time!

Popping open the box, you find the usual stash of things together with a few extras. My package came with the following:

I found the contents of the box to be very nicely packed together, and not to mention quite securely, even though the side of my retail box had mild damages, I’m almost certain that none of the contents got damaged at all in the process. 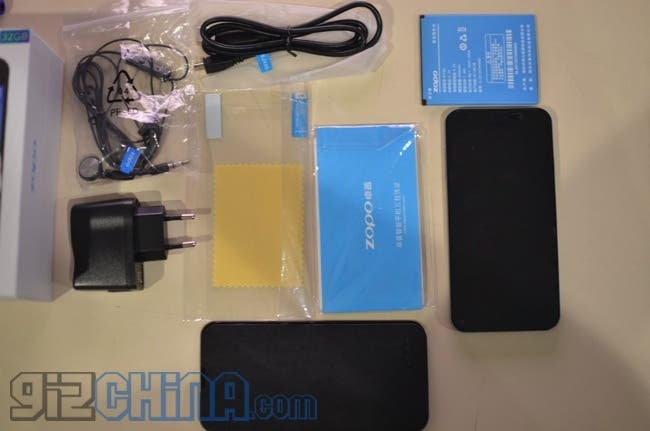 Notice that the box notes that the specs are of the lower end 1GB RAM with 16GB internal memory version. I’ve checked the phone since then and confirmed that it IS the 2GB with 32GB internal memory version.
So let’s move on to the device shall we? The ZP980 Ultimate is probably known all over GizChina by now, but to rehash our memories, let’s go through its specifications.

Walk around the device 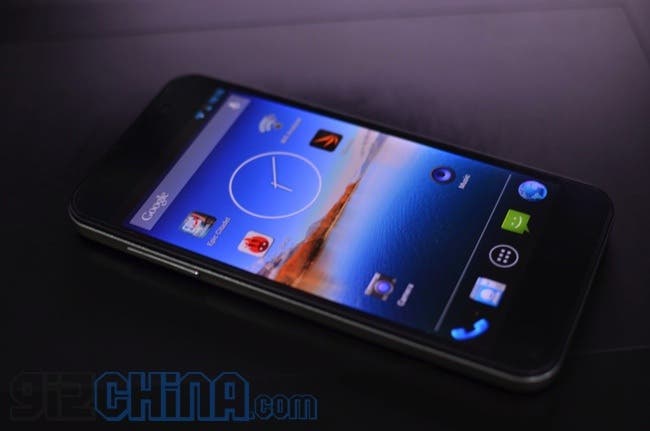 Front of the phone, you get to see the beautiful 5” 1080p panel, supposedly made by Sharp, looking real fly. The panel is an OGS panel, which means that the touch sensitive glass and the LCD sit on the same layer, meaning that you don’t have that ugly gap in between the touch screen and the LCD.

The panel is an IPS panel as well, so viewing angles and colours are great.

You’ll also find the supposed 3MP front facing camera, but if you follow the video down below as well, you’ll see that I discover it to be an 8MP camera instead. Not a bad discovery!

Another not so bad discovery is the fact that the phone in itself came with a screen protector installed. Minus for the bubbles that can be fixed, that’s not too bad either! 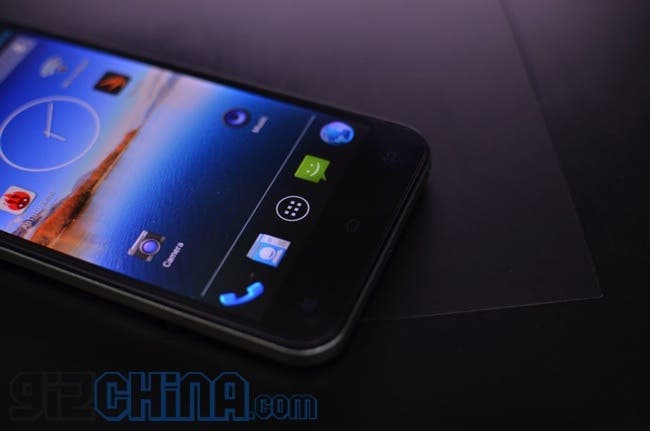 You have your 3 capacitive buttons up front, in options-home-back respectively. They DO light up, but don’t expect them to blind you, rather the only other time you’d be able to see them is probably at night, which sort of makes sense in a way. 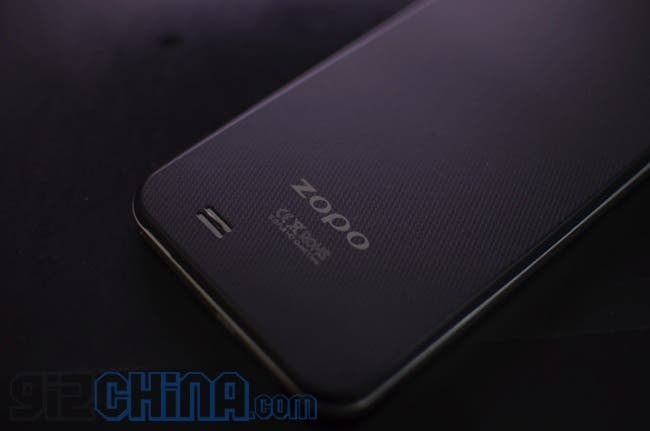 You have the logo and a speaker grill up back, all in a visually textured checker back. I say visually textured because it just feels like a matte surface, which isn’t a bad thing at all. Doesn’t seem to gather any fingerprints upon usage. The speaker is not the loudest of them all, but it’s not exactly soft either. 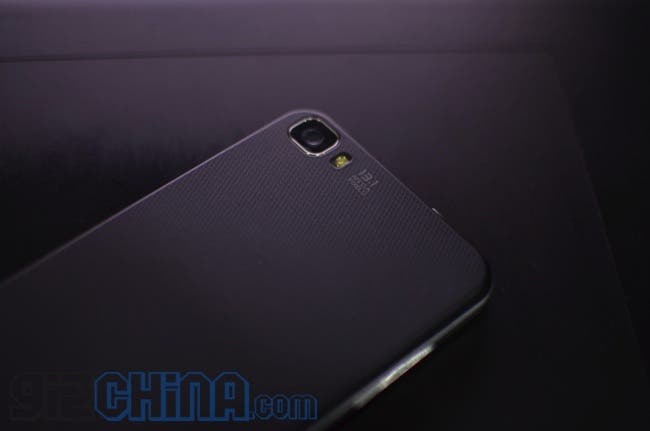 You’ll also find the 13.1MP camera. I realized that even though Antutu shows it as 12.6MP, the built in camera still recognizes it as a 13 MP camera. Sample photos down below. 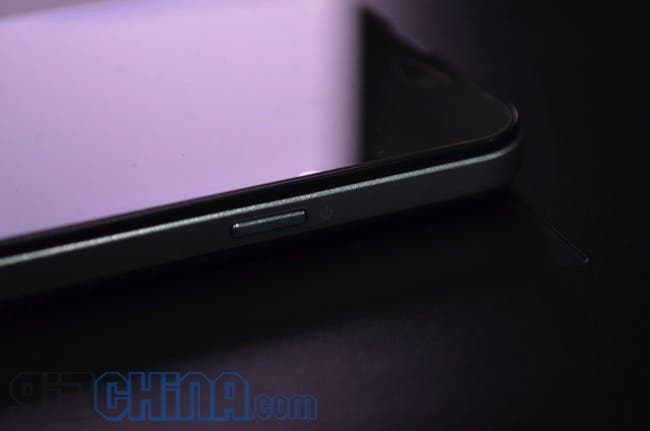 Looking on the right means you’ll find the power button with a small print that shows the power icon. It pops up nicely and is easy to press, unlike some other phones I’ve had before, mainly HTC devices. 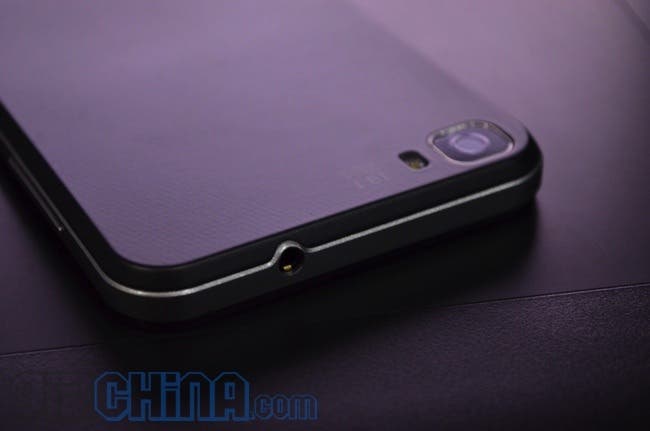 Up top you’ll find the 3.5mm headphone jack, which hooks in quite firmly, and doesn’t move around. Plus points for build quality.

The provided earphones feel quite cheap in build quality in comparison to the phone, and they only seem to have one button, which allows for answering calls, where some other headsets have the ability to play/pause, prev track and next track. The connection point to the earphones themselves are also quite flimsy. The sound quality of the earphones isn’t TOO bad, but you can certainly get better by providing your own. Bass is clearly lacking, though there seems to be quite a bit of mid. Treble isn’t as clear as I’d like it either. Things become much better after hooking in a pair of proper headphones (Tested with my pair of Philips O’Neill The Stretch). 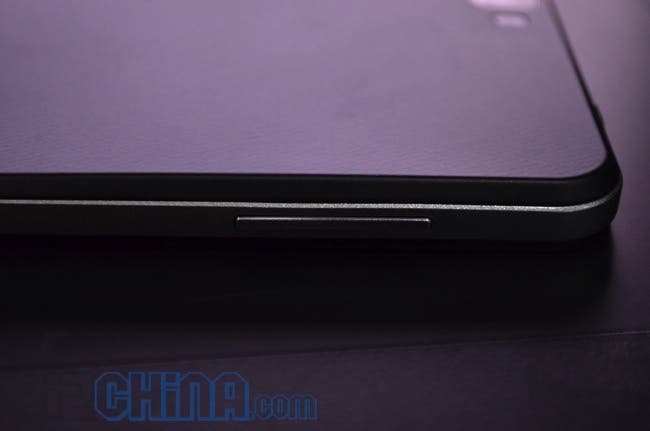 On the left you’ll find the volume rocker, that like the power button, also had a nice press to it and feels nice and solid, and doesn’t move or bump around. 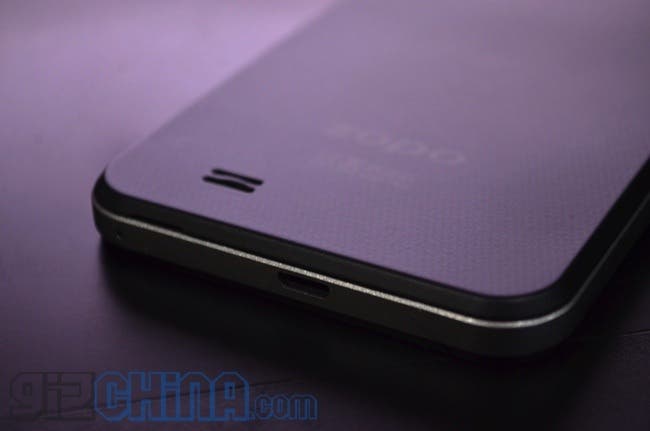 And finally on the bottom, you’ll find the micro USB port, for your data and charging etc etc needs. USB port clicks in quite nicely and doesn’t wobble. You get the choice of USB Storage, MTP, PTP or Charging only or Connecting it as a CD- ROM to install additional software when you hook it into a PC. Always nice to have extra options.

Overall, I’m really happy with the build quality of the device. It’s put together quite solidly, though there is that issue with the flexing that Andi here in GizChina has brought up before. Just don’t put it into your back pockets, problem solved!

Benchmarks are great, and the system runs really nice and fast, as expected from a quad core with 2GB of ram anyway. Battery life so far from usage is great, despite only having 2000 mAH under the hood, and running all the benchmarks and tests. It should be noted that you’re unable to copy apk files into your internal system (didn’t allow me to copy apk files in device from my local server into the phone), however, as a fun fact, somehow hooking up the phone into my computer, and running adb commands, my computer recognized it as “My HTC”. Odd. 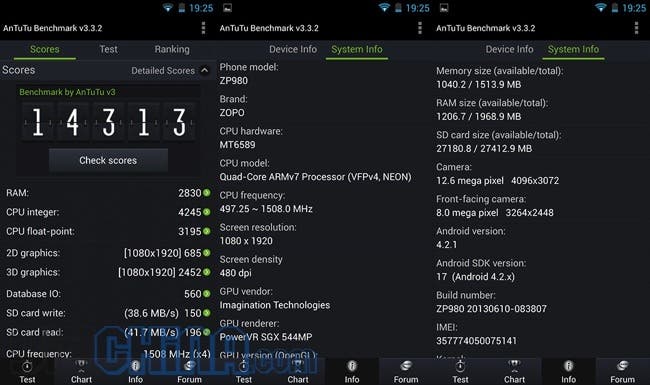 GPU Performance is impressive as the system pulls a good 51fps on Unreal’s Epic Citadel. Strangely enough, I noticed that there was some sort of FPS cap at 51fps however, though I can’t be too sure of that. While not the smoothest in 3d Mark, it did manage to pull above 10fps on the normal test, though it dipped lower when set to extreme. Strangely though, it didn’t manage to finish the test without 3D Mark crashing.

It should be noted that the options in Developer Options seem to be quite limited, as I’m unable to turn on the usual animations that come with Android 4.2.1, but no matter. Not a big deal. Vibrations on the phone seem to be on the weak side though, as I would have liked it a tad stronger, for… feedback purposes. Just don’t expect it to do a lot of rumbling. The Galaxy Note 2 in that sense is a lot stronger. 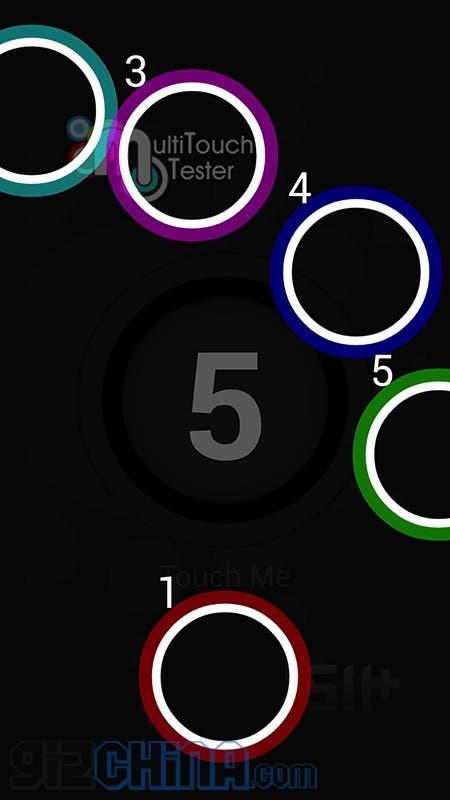 Running a multi touch point test, I realized that the ZP980 only registers up to 5 touches at any given time, a short far cry of the 10 of my Note 2. Still, one shouldn’t need to have that many fingers on screen I guess, but it would have been a nice thing to have.

USB OTG Seems to work fine as I hooked in the microUSB cable and began typing away with a physical keyboard to reply messages.A nice addition to have, as you can do plenty with these.

To wrap up this section, the phone comes installed with the usual google package, Play Store, Google drive, Gmail, Youtube, Maps, without any Chinese applications really seen in sight. Always nice for them to have this for international customers.

The camera app that comes with the Zopo ZP980 isn’t too bad at all. The focus time is fast enough, and the photo quality seems good enough, but don’t rely on any astounding low light performance to blow you away. In the end, it’s just a really capable smart phone that takes pretty good pictures.

The one thing that the Zopo ZP980 really delivers on in my opinion, is in signal strength in connectivity. 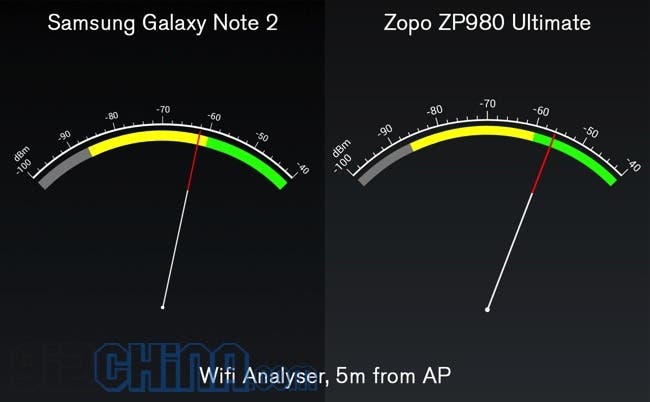 In the WiFi department, almost all the times, the ZP980 has better range and pickup vs my Note 2. At 5m away from the AP, the signal strength can be up to 5 dBm better, but moving close to the edges of the WiFi range, almost 20-25 meters away, the difference between the ZP980 and the Note 2 is up to 15 dBm, with the Zopo ZP980 leading! That’s a VERY big difference! 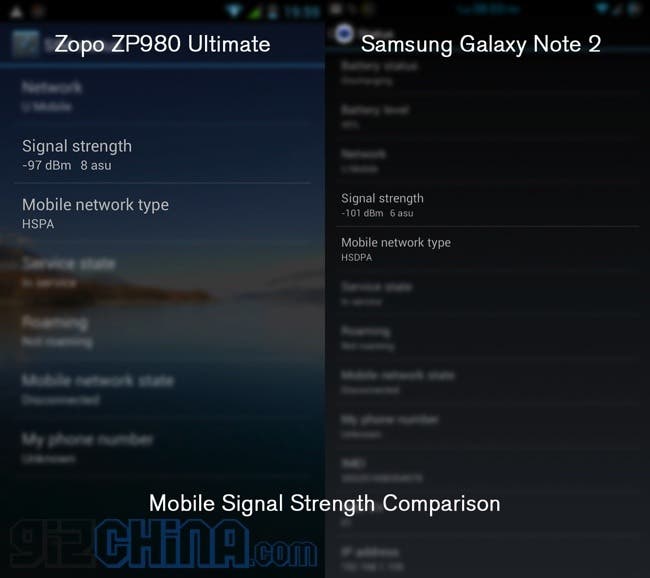 Moving on to the mobile signal department is almost the same story, except maybe less pronounced, still a very good difference. Signal strength pickup is about 5dbm or so better than the Note 2, meaning that for the most part, I get more signal bars vs the Note 2! Nice improvements.

The ZP980 supports HSPA+ as well, so surfing is really fast and snappy, and a real pleasure to deal with.
GPS as well connects fast and locks on relatively fast, with pretty damn good accuracy. 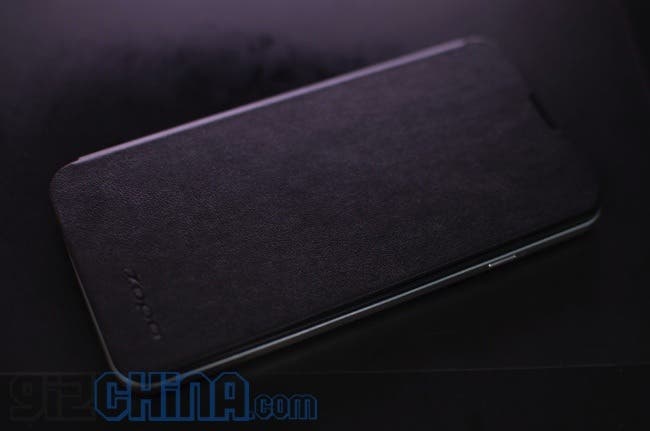 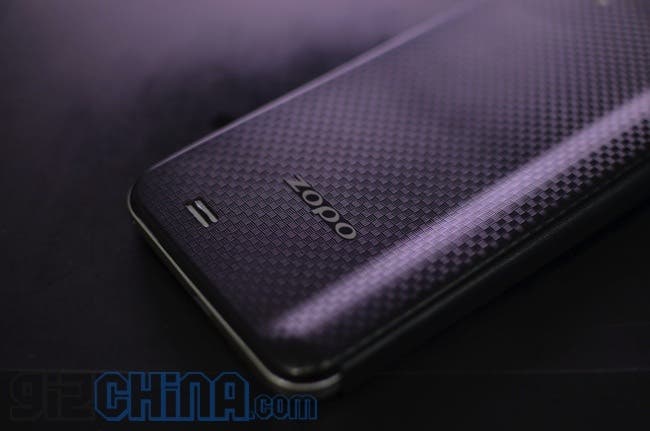 As far as I’m concerned, it looks like a Zopo original part. It snaps into place nicely, if not more tighter than the default back, and has a textured feel to it, that makes it pleasant to touch. Like its default counterpart, it also doesn’t collect a lot of fingerprints, so that’s always a plus point, and it’s slightly glossy which gives it quite a more premium look, arguably better than the default back.

The front cover is made really well with no signs of cheap manufacturing, and has a very nice tactile feel to it up back, a leathery look and feel, with the other side (facing the phone) being of a black felt-ish material.

I think that even though this may not be the cheapest Chinese made phone out there, it’s certainly one of the better ones. Sure you pay a bit of a premium for it, in comparison to other Chinese made phones, but the advantages could be evidently clear, with really top notch build quality and connectivity backing you up, as well as the aesthetics to boot. Not many phones can cost this much and look this good after all. At 330, delivered with 4 day delivery, I think it’s a pretty good buy, considering you’re given quite a few extras as well.

[templatic_contentbox type=”author” title=”About the Author”] Hamsteyr is an avid technology freak from Malaysia, who loves keeping up with the world of mobile technology, recently those coming from the far east. As a programmer and indie game developer, I also have an active role in XDA-Developers as an app/ ROM developer, when I’m not too busy developing self indie titles. [/templatic_contentbox]

Next JiaYu G4 Advanced Review: One week of normal usage