Over the past few days we have heard rumours that Apple are testing a 6-inch iPhone device, if this is true are these the first leaked photos?

At one time Apple said that nobody wanted a 7-inch tablet, so they launched a slightly larger tablet named the iPad mini. They also said that 3.5-inch is the optimal size for a phone’s screen yet they launched the 4-inch iPhone 5 and now are reported to be working on a 6-inch iPhone phablet (iPhablet?). 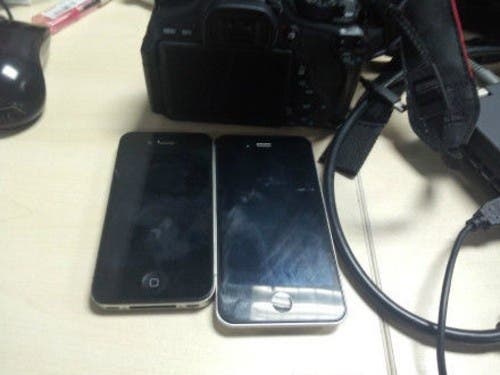 Soon after the reports of a possible 6-inch iPhone, photos of a purported device have surfaced. Sitting next to the current iPhone the larger mode is longer and much wider, and although features the traditional iPhone look, is quite attractive.

According to the tipster who leaked the images the there might be a 4.8-inch and 6-inch iPhone on the way with with the larger phone offering a resolution of 1779 x 640.