No matter how careful a tech company is there is no guarantee that your latest product will remain a secret until launch. This is exactly what Mediatek learned this weekend when full specifications of the MT6592 and MT6588 processors were posted online.

While it is no secrecy that the 8-core MT6592 and quad-core MT6588 would be officially unveiled on 20th November in Shenzhen, complete specifications of each have remained elusive up until this weekend.

Mediatek have had a stellar year thanks to the quad-core MT6589 range of processors, and although the current quad-core chips remain very good they will no longer remain king of the quad-core hill. The new MT6588 chipset is built-on a 28nm Cortex A7 architecture and available at speeds for up to 1.7Ghz. Faster CPU speed is backed up be an update in graphics performance as the MT6588 gets a Mali450-mp4 GPU running at 600mhz. Other than added support for HEVC and VP9 video codecs the rest of the specs are similar to the current MT6589(T) including support for 1920 x 1080 displays, 13 mega-pixel cameras, and integrated WIFI, Bluetooth,FM radio and GPS. 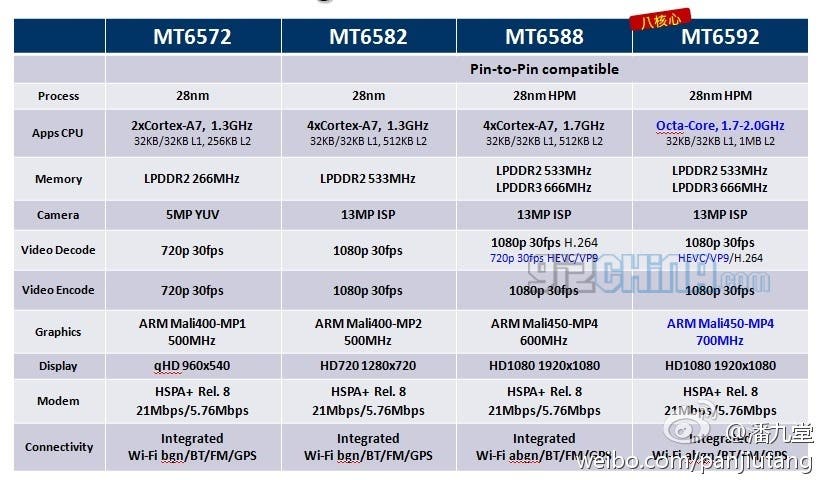 For most phone users a quad-core processor is going to provide ample performance, but for those who want the best of the best Mediatek will also be offering the 8-core MT6592 chipset. Again, the 8-core chip is base on 28nm architecture but will be offered in either 1.7Ghz or 2.0Ghz options. The flagship 8-core chip will also have a speedier 700mhz Mali450-mp4 GPU and the same added video codecs.

When can we expect 8-core Mediatek phones?

We have already seen the officially unveiling of the Bird Snapdragon XL 8-core phone (although a sales date has not been announced) and we have seen leaks that suggest Zopo, Mlais, Xiaocai, UMi, Jiayu and possible Sony also have MT6592 phones almost ready to launch.

With development already underway for months and an official announcement on 20th November, we could see the first 8-core Mediatek Chinese phones on sale before the end of the year!

Next Huawei Ascend Mate 2 breaches the 20k mark on AnTuTu