True to its name, the Vivo 4.8 HD comes with a 4.8-inch screen, which also happens to be the highlight of this device. This because, instead of a run-of-the-mill IPS panel that we’re used to seeing, the phone comes with a Samsung touch — the 4.8″ panel packs the Super AMOLED technology. Like the octa-core HTC that showed up out of nowhere recently, the Blu Vivo 4.8 HD too features some funky colours like Neon Pink, Neon Yellow, and the usual Back and White. 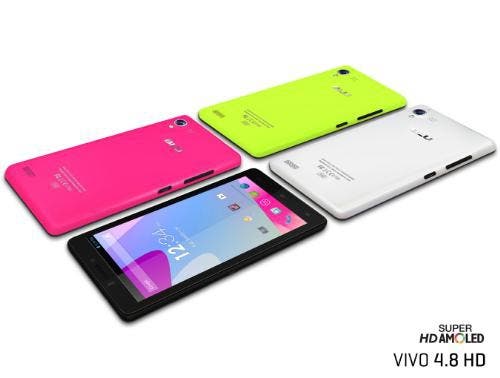 The 4.8″ Super AMOLED display packs an HD resolution of 1280 x 720 pixels, posting a rather austere pixel density of 305ppi. Complete specifications include a 1.5GHz MT6589T quad-core processor, 1GB of RAM, 16GB of ROM, an 8 mega-pixel front camera, 5 mega-pixel rear camera and a 2000mAh battery to power it all. Another aspect that might catch the fancy of some is the device’s thickness — Blu have managed to pack all the goodness in a rather sleek 6.9mm body.

The device has been priced $250 unlocked, however, it offers no LTE connectivity with 42Mbps HSPA+ being the best it can do.