Another Lenovo flagship smartphone is due to make an appearance. Leaked in Antutu benchmarks as the Lenovo K7T “Kingdom” the mystery phone boats high-end features!

With a shrinking PC market to make to fill the piggy bank, Lenovo have been looking towards the smartphone market to bring in the cash and over the past 12 months have made some very exciting smartphones. Starting with the Intel powered K900 last year and followed by the Vibe Z this year, but Lenovo have another flagship up their sleeves.

These Antutu scores come from a Lenovo phone named as the K3T “Kingdom” and will be the company’s flagship device of 2014. Taking on the might of the likes of the Vivo Xplay 3S, OnePlus One and Oppo Find 7 is no easy task, so Lenovo have pulled out all the stops to create (on paper) a killer device. 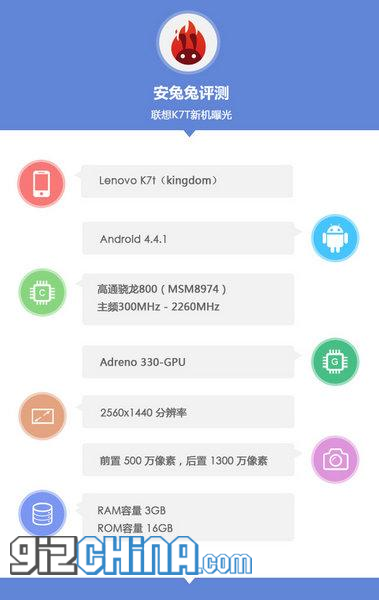 The Lenovo K3T “Kingdom” boasts everything we expect from a phone of this calibre including a qHD 2K display (2560 x 1440), 3GB RAM and a Qualcomm Snapdragon 800 processor. Other details include 16GB memory, Android 4.4, 5 mega-pixel front camera and 13 mega-pixel rear. Although not mentioned here it is also very likely that this mystery Lenovo machine sports 4G LTE support too!

Could we see the Lenovo K7T “Kingdom” at MWC next month? Let’s wait and see!